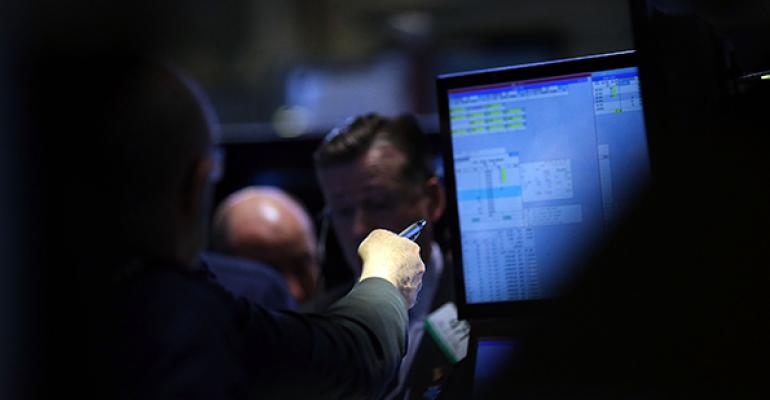 How Surging Stocks May Be Prolonging the Bond Bull Market

By Luke Kawa and Sid Verma

(Bloomberg) --When it comes to flows into stocks and bonds, forget the great rotation: It’s all about the relentless rebalancing.

“The equity rally is feeding the bond rally, preventing bond markets from selling off in a risk-on environment,” JPMorgan Chase & Co. strategists led by Nikolaos Panigirtzoglou wrote in a note distributed to media on Monday.

Major U.S. equity benchmarks ascended to fresh all-time highs on Tuesday on the back of rising optimism in the economy and encouraging earnings growth from major corporate bellwethers. The yield on 10-year Treasuries traded at 2.32 percent ahead of the Federal Reserve meeting, after surging eight basis points.

Here’s how the dynamic, according to JPMorgan, plays out: While bond fund inflows this year have been almost double those of their equity counterparts, that’s in large part a byproduct of price appreciation in stocks, which has boosted assets under management at those funds at a much quicker pace.

Panigirtzoglou said equity outperformance is forcing retail investors to play catch-up by accumulating more bonds to keep their portfolios from becoming too risky. This feedback loop between risk assets and more conservative fixed-income could explain the failure of longer-term bond yields to rise meaningfully despite a buoyant rally in stocks over the past five years, according to JPMorgan’s team.

The strategists’ theory pinpoints a potentially potent countervailing force to the prophesied broad-based investor exodus from bond funds and move into equities as the global economy rebounded from the financial crisis. U.S. household and institutional investors have a lot of room to increase allocations to equities, according to Credit Suisse Group AG, as the non-financial corporate sector has provided the lion’s share of flows into the asset class during this bull market by way of stock buybacks.

Low interest rates spur the need to increase equity allocations in order to juice returns, while depressed volatility boosts risk-adjusted returns from stocks. The outperformance of global stocks on a risk-adjusted basis over the past three months has spurred tentative hopes that this long-awaited allocation shift out of fixed-income and into equities may finally come to pass, as flows tend to follow performance -- especially for less valuation-sensitive investors such as retail folks.

While there are plenty of reasons to doubt this switcheroo will take place -- an aging population, regulations, the undiminished bull run in bonds -- Panigirtzoglou’s team argues that portfolio construction may carry the day.

But the classic 60/40 stock/bond asset allocation -- predicated on an inverse correlation between the two classes -- that’s served investors well for the past three decades may not offer the same diversification benefits in years to come. Recently, for U.S.-centric investors, bonds certainly haven’t been behaving like a suitable hedge against a decline in equities. “You could argue the bond market rally is being helped by the equity market rally, but by the same token you could argue the latter is being is driven by the bond market rally as well,” according to Toby Nangle, co-head of asset allocation at Columbia Threadneedle Asset Management. “After all, the low implied premium in fixed-income -- term structure, inflation risk, credit risk -- is feeding into the equity risk premium too.”

Nangle added that low market expectations for inflation and growth were the principal anchors for high bond prices, rather than inflows induced by the equity rally.  In light of subdued macroeconomic and market volatility, along with low interest rates, JPMorgan judges U.S. households to be only modestly overweight in stocks.

On the flip side, there’s a potentially worrisome scenario for investors: Could this virtuous cycle turn vicious?

“In a falling equity market, investors would have to sell bonds and buy stocks to keep similar allocation percentages,” said David Schawel, portfolio manager at New River Investments. “At the margin, this could become a headwind for the bond market.”

A similar dynamic played out in August 2015, when fears of “quantitative tightening” sparked a simultaneous selloff in stocks and bonds following the devaluation of the Chinese yuan.