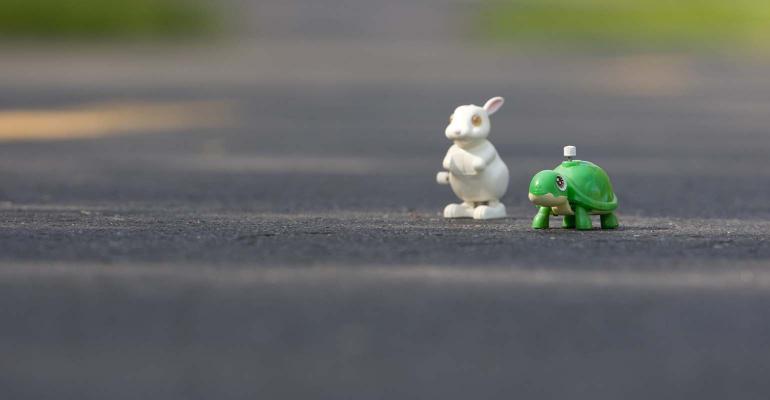 Hedging Tail Risks: The Tortoise Versus the Hare

Deciphering the lessons of 2022 by examining the performance of three tail-risk hedging strategies.

2022 was a difficult year for investors, as both stocks and bonds endured prolonged drawdowns not seen in recent decades.

What, if any, lessons should investors take from the market’s performance in 2022? To help answer that question, in their December 2022 paper “Should Your Portfolio Protection Work Fast or Slow?,” the Portfolio Solutions Group (PSG) at AQR examined the performance of three tail-risk hedging strategies:

The paper begins by observing: “If you know a drawdown is going to be short-lived, then it’s probably not going to impair your ability to meet your longer-term objectives. On the other hand, this also suggests an important, yet subtle truth: when it comes to wealth creation, investments that perform better in longer-lived drawdowns may be more valuable than ones that perform better in sharp crashes. More pointedly, portfolio protection strategies that work best over shorter-term ‘tails’ are not as valuable as strategies that can deliver over longer ones.”

AQR then examined the performance of the three strategies covering the two large drawdowns experienced over the period January 2020-September 30, 2022 (which is still ongoing). As seen in the chart below, while in the short-lived COVID-related drawdown of February-March 2020, the tail-hedging and put-buying strategies performed best; in the recent, longer drawdown that began in January 2022, trend-following performed best. 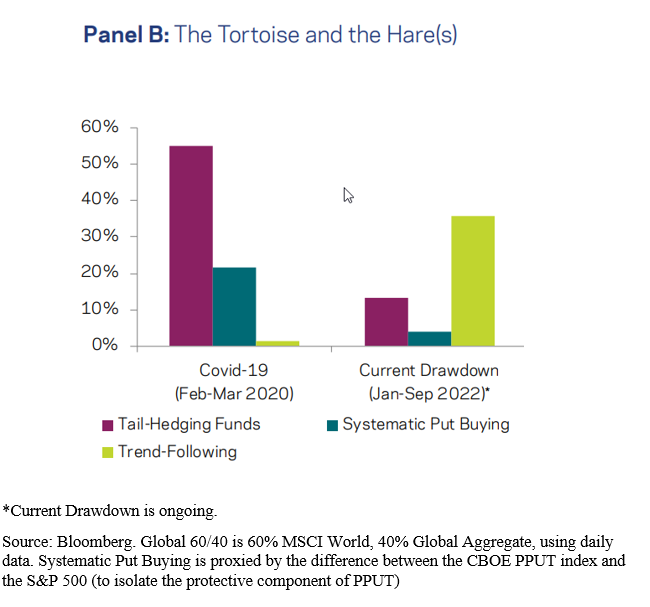 The PSG then broadened its “tortoise/hare” comparison to include the five largest 60/40 drawdowns since 2000, in order of duration. As seen in the exhibit below, options-based hedging strategies outperformed in shorter drawdowns (left side) but were less impressive in longer ones (right). Trend-following showed roughly the opposite pattern, posting its most impressive returns in the protracted bad times. The research found this to be true both during the drawdowns themselves (Panel A) and, importantly, from peak to recovery, or “round trip” (Panel B), where the advantages for trend-following are even more pronounced. The authors observed: “This ‘round-trip advantage’ makes sense economically: the price of protection from options increases amid drawdowns (e.g., via higher premiums), resulting in greater-than-typical losses in the recoveries that follow. For trend-following there is no such mechanical link, and while they may struggle around the turning point, they have an ability to participate in recoveries. In other words, trend-following strategies may be expected to hold on to (or even add to) their ‘drawdown gains’ better than options-based strategies.” 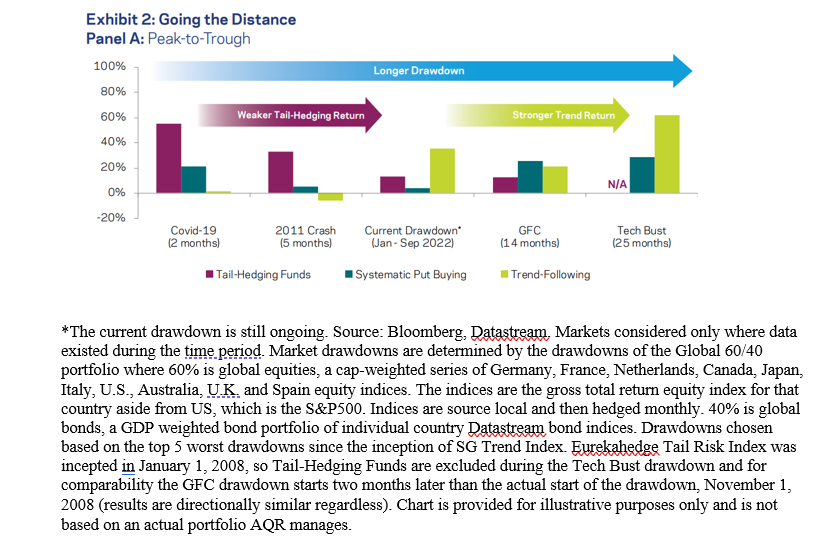 The researchers next examined the impact of average returns outside of specific drawdown episodes. Exhibit 3 below plots long-term cumulative returns for options-based and trend-following strategies since the inception of the SocGen Trend-Following Index (Panel A) 2000 and the EurekaHedge Tail Risk Index (Panel B) 2008. In exchange for crash protection, options-based strategies suffered negative long-term average returns, whereas trend-following—beyond its tendency to deliver in longer-term drawdowns—produced positive average returns. 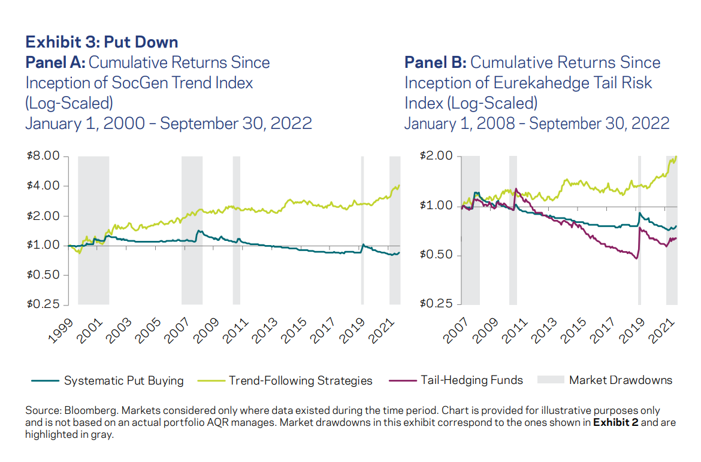 These findings led the PSG to conclude that the tendency for buying puts to produce negative long-term returns “makes them a poor portfolio addition in general, and they often see rising prices (via higher premiums) after periods of market stress—making these among the worst times to invest. Research suggests trend-following strategies are a different story. They have shown the ability to deliver over the long term and particularly in ‘slow’ challenging market environments, and—crucially today—do not have a tendency to ‘richen’ amid market drawdowns.”

AQR’s findings are consistent with those of Campbell R. Harvey, Edward Hoyle, Sandy Rattray, Matthew Sargaison, Dan Taylor and Otto Van Hemert, authors of 2019's  “The Best of Strategies for the Worst of Times: Can Portfolios be Crisis Proofed?.”  This paper analyzed the performance of several defensive strategies, both active and passive, between 1985 and 2018, with a particular emphasis on the eight worst drawdowns (the instances where the S&P 500 fell by more than 15%) and three U.S. recessions (8% of the full period). The authors found that the most reliable defensive tool, continuously holding short-dated S&P 500 put options, was also the costliest strategy (-7.4% return over all periods). While it performed well during crashes (earning a 42.4% return on average), it was costly during the “normal” times (losing 14.2% on average), which constituted 86% of the sample, and expansionary (non-recession) times, which constituted 93% of the observations. As such, passive option protection seems too expensive to be a viable crisis hedge. The authors noted that options are also expensive to trade; thus, returns would have been even worse after implementation costs.

The PSG’s findings are also consistent with those of Roni Israelov, author of the study “Pathetic Protection: The Elusive Benefits of Protective Puts,” which appeared in the winter 2019 issue of The Journal of Alternative Investments. He examined the drawdown characteristics of systematically protected portfolios using the CBOE S&P 500 5% Put Protection Index, as well as Monte Carlo simulations, and concluded: “Put options are quite ineffective at reducing drawdowns versus the simple alternative of statically reducing exposure to the underlying asset.”

As with all portfolio decisions, an allocation to risk-mitigating strategies should be a strategic (not tactical) decision. Unfortunately, many investors succumb to the stress of market turndowns and turn to buying puts—despite the long-term evidence that doing so is likely to be a losing proposition. Instead, investors concerned with the risk of severe, prolonged drawdowns should adopt approaches that are more likely to allow them to achieve their goals. Strategies as simple as reducing equity exposure to a more acceptable level. Alternatively, investors could add trend-following strategies and/or exposure to unique sources of risk, such as long-short, market-neutral factor strategies, which research—including the 2018 study “Tail Behavior in Portfolio Optimization for Equity Style Factors,” the 2021 study “The Best Strategies for Inflationary Times” and the 2022 study “Investing in Deflation, Inflation, and Stagflation Regimes”—has shown provide diversification and tail-risk hedging benefits.

Larry Swedroe has authored or co-authored 18 books on investing. His latest is Your Essential Guide to Sustainable Investing. All opinions expressed are solely his opinions and do not reflect the opinions of Buckingham Strategic Wealth or its affiliates. This information is provided for general information purposes only and should not be construed as financial, tax or legal advice. LSR-22-428