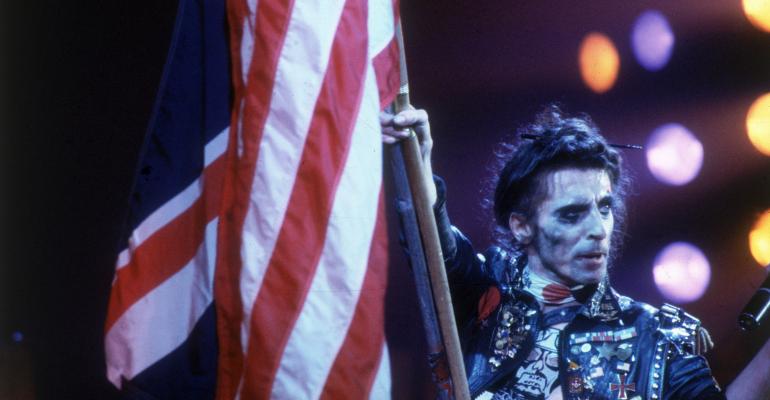 Heavy-Metal Markets Have Worrying Echoes of 2006

(Bloomberg View) -- In April 2006, I was starting to worry about what I was seeing in financial markets. The phrase "heavy-metal markets" seemed to describe the paradox of stocks and bonds all rising at the same time, riffing on the joke that good heavy-metal music is created by making everything louder than everything else. Today, the market backdrop seems awfully reminiscent of that period.

Back then, 25 of the world's 26 biggest government bond markets had been profitable in the previous 12 months (Japanese debt was the sole exception). Returns ranged from 0.54 percent on Swiss debt, 1.85 percent from U.S. Treasuries, and 2 percent on euro-denominated securities.

Stocks had also had a good run; the S&P 500 had gained almost 10 percent, the Stoxx 600 in Europe had added more than 27 percent, and only four of the world's 77 major equity indexes had failed to post gains in the one-year period. Commodities had also been profitable, with commodities climbing 4 percent in the year to March, according to a Goldman Sachs index.

But that felt wrong. Equities and fixed income are supposed to be inversely correlated. What's good for bonds -- slow growth, stagnant or declining consumer prices -- is bad for stocks, and vice versa. Yet both asset classes were rising, as were commodities.

To name my pain a decade ago, I created a chart called "Priced for Perfection." It showed how bond market volatility, stock market volatility, emerging market debt and corporate bonds had all headed in the same direction. I may have been right to be nervous, but my timing was completely off, and any investor will tell you that being early can be as bad as or worse than being wrong. The good times rolled on into the second half of 2007 -- until they ended with a bang:

As the right-hand side of the chart shows, we're heading into similar territory. Equity volatility, as measured by the white line, is back down to where it was at the start of 2006. Bond volatility in red is close, while indexes of both corporate and emerging-market debt suggest investors are warming to those two asset classes after shunning them at the start of the year.

On a total return basis, which includes reinvested dividends and interest payments, investors are making money in every asset class so far this year. Even commodities have eked out a gain of 1.1 percent, according to the Goldman Sachs Commodity Total Return Index: 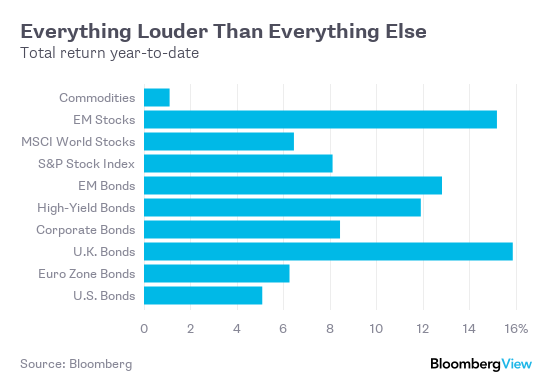 Traditional investment theory says you buy bonds for the income from their interest payments, and you buy equities for the capital appreciation they offer in return for a higher risk. That's not the case in the current world of zero or negative interest rates; the bond returns in the table above are produced by higher prices as investors drive yields ever lower.

Almost $9 trillion of the world's $25.4 trillion of government debt now yields less than zero. And if you compare the dividend yield on the S&P 500 stock index with what's available on a 10-year U.S. government bond, you can see that this year's fashion is for stocks to offer a much better yield: 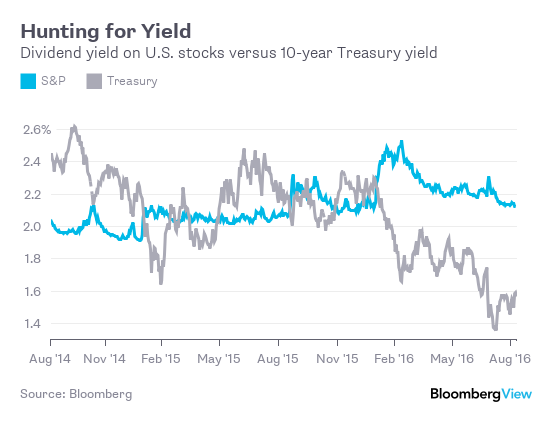 Are we looking at 2006 all over again? Well, the world is a very different place. Central banks have armed their monetary bazookas with trillions of dollars, euros, yen and pounds. Commercial banks for the most part are much less leveraged than they were a decade ago, with better capital bases. And you'd hope that investors have learned some lessons about adding risk to chase returns.

And yet it's hard to escape the nagging feeling that the same desperate search for higher returns that led to the creation and purchasing of such Frankenstein investments as Constant Proportion Debt Obligations or Collateralized Debt Obligations Squared is in play again, albeit in more vanilla markets such as high-yield debt. With stocks and bonds rising simultaneously, money managers are becoming less discriminating in their investing. History doesn't repeat itself; but it sure does rhyme and echo sometimes, especially in financial markets.