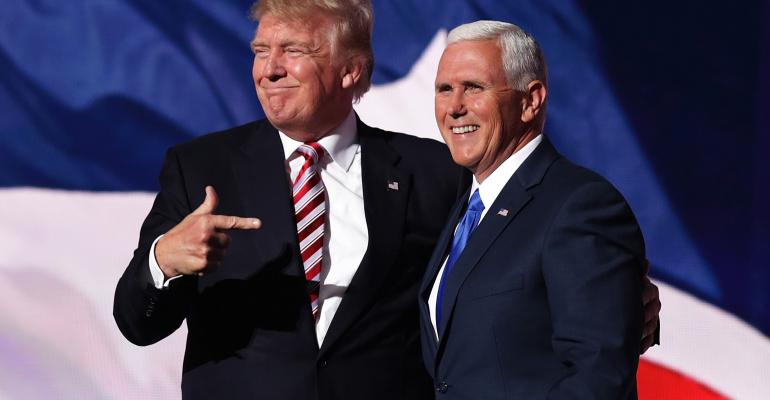 <p>Donald Trump being named the Republican Party&#39;s nominee for president is just one of many political curveball&#39;s seen these year.&nbsp;</p>
Investment>Equities

Half Right Is Half Wrong in Markets Impervious to Political Risk

(Bloomberg) -- Say at the beginning of the year you knew how the British secession vote would turn out, and that Donald Trump would be nominated for U.S. president. Say you also foresaw an army uprising in Turkey, the fall of Brazil’s president and terrorism in Brussels and Nice.

Where would you have said markets would be on July 21? Would you have bet on the S&P 500 Index sitting at a record, global corporate bond yield premiums close to the narrowest in a year, or emerging-market currencies 8 percent above their January lows?

Such is the plight of forecasters, who have been mostly correct in their view that 2016 would be a year marked by rising political danger. The problem is, mostly correct has been pretty much wrong when it comes to calling markets, another example of the near impossibility of making accurate price predictions in a world dominated by central-bank stimulus, subzero bond yields and tepid economic growth.

“You probably would have done worse if you knew the outcomes ahead of time,” Bill Stone, chief investment strategist at PNC Wealth Management in Philadelphia, said by phone. “Recent events certainly illustrate the futility of trying to make investment decisions based on geopolitical outcomes.”

Monetary stimulus, ranging from interest-rate cuts to bond purchases that have swollen major central-bank balance sheets by $7.2 trillion since 2009, has fueled risky assets since the financial crisis while keeping economies afloat though mostly drifting. Policy makers have been as generous as ever in the aftermath of this year’s political dramas. The result has been markets made ever more mysterious when viewed through traditional investment models.

Take U.S. stocks, where valuations last week climbed above 20 times earnings for the first time in seven years. Profits aren’t rising, share buybacks and takeovers are calming down. And yet, with Brexit, the Nice attack and Turkey’s thwarted coup as backdrop, the S&P 500 has rallied for three straight weeks, closing at a record for the first time in 13 months.

One reason for the rebound is the refusal of the U.S. economy to fall into a recession. Another is conditioning. Since the financial crisis, speculating on protracted declines simply hasn’t paid off, thanks in part to the willingness of central banks to stanch losses.

“Part of the resilience is that policymakers are on the case, they’ve been aggressive in response to these shocks,” Ben Mandel, a global strategist with JPMorgan Asset Management’s multi-asset solutions team, said by phone. “There is a limit to it, ultimately.”

Bets on that limit haven’t panned out. In May, Morgan Stanley chief cross-asset strategist Andrew Sheets proposed an alternative to the “sell in May” investing adage, encouraging clients to buy positions that benefit from rising volatility. Around that time, Bank of America Corp. chief equity strategist Savita Subramanian predicted a “ vortex of negative headlines” in June could push stocks lower.

Again, half right. The S&P 500 dropped 5.3 percent in the two days following Brexit and the CBOE Volatility Index shot up 49 percent, to the highest since the peak of selling in February. But the spike was erased in less than a week and the fear gauge closed Wednesday at 11.77, the lowest in almost two years.

It’s the same story in corporate bonds, where the extra yield demanded by investors to compensate for credit risk has narrowed to roughly the lowest level in a year. In foreign exchange, an MSCI index of emerging-market currencies from Brazil to Russia has rebounded from a six-year low in January.

Hazards are proliferating. A global index tracking the exposure of 77 countries to political risk is flashing some of the highest readings in a decade, according to New York-based research firm Eurasia Group. Scores are calculated using monthly surveys on government stability, social stability, security, economic policies and investment policy.

The fat returns investors once demanded to compensate for heightened political uncertainty has been diluted by central-bank money. Assets purchased by the Bank of Japan and European Central Bank not only pushed yields on about $10 trillion of debt worldwide below zero, they’ve squeezed investors out of government bonds into riskier terrain -- stocks, corporate bonds and emerging markets.

“We are in a world where you’re going to fixed income to get your capital appreciation, and you’re going to equities to get your yield,” said Bhanu Baweja, the London-based head of emerging-market cross-asset strategy at UBS. “It’s an upside-down world.”

At 2.1 percent, the S&P 500’s dividend yield is half a percentage point higher than the 10-year Treasury rate. The gap stretched to one of the widest levels ever earlier in the month. At the same time, the iShares 20+ Year Treasury Bond exchange-traded fund has posted a total return of 16 percent in 2016, compared with the S&P 500’s gain of 7.6 percent.

The potential for distortion rises as policy makers double down on unconventional measures to stave off recessions. Even after years of keeping rates at record lows, global growth has trailed past cycles and economies from Japan to Europe are still struggling along the edge of deflationary spiral.

A Bank of England official said this month "material easing" is likely and that a "sledgehammer" might be used. Economists speculate Japan is mulling helicopter money, where fiscal stimulus would be funded by money printing by central banks. Even policy makers at the Fed, the only major central bank attempting to wean investors off easy money, stressed there’s no rush to raise borrowing costs again.

One constituency that’s accustomed to political risk is emerging-market investors. They’ve spent the past two years juggling a collapsing oil price, corruption scandals in Brazil and Russia’s disputes with Ukraine and Turkey. Their stocks reflect it: MSCI’s emerging-market index has gained about 10 percent in 2016.

For them, 2016 is business as usual. In fact, some investors are betting developing-market stocks and bonds will be the most resilient to fallout from Brexit and volatility surrounding the U.S. elections, speculating that industrialized nations will keep rates low. More than $18 billion has poured into emerging markets since Brexit, according to a research note published by Goldman Sachs Group Inc. on Tuesday.

“The market is very focused on yield and has taken its eye off other fundamental factors," said Andrew MacFarlane, an emerging-markets credit strategist at BNP Paribas SA in London. "When you’re really eager to get a return on your money, you’re willing to overlook things that you may otherwise look at more carefully."