/sites/all/themes/penton_subtheme_wealthmanagement/images/logos/footer.png
Recent
Recent
A Course Correction on Nurturing Talent and Culture
Jan 27, 2022
Multifamily Developers Try to Keep Pace with Demand
Jan 26, 2022
Ocado Unveils New, Lighter Robots in Grocery-Delivery Push
Jan 26, 2022
Nine Must Reads for the CRE Industry Today (Jan. 27, 2022)
Jan 26, 2022
Featured
The 10 Best and 10 Worst States in Which to Retire in 2021
Jul 15, 2021
Poll: 15 Classic Books on Investing and the Markets
Apr 03, 2020
25 U.S. Markets Adding the Most Multifamily Units This Year
Feb 03, 2021
Fifteen Must-Listen Business Podcasts for Advisors
Aug 14, 2020
Viewpoints
brought to you by 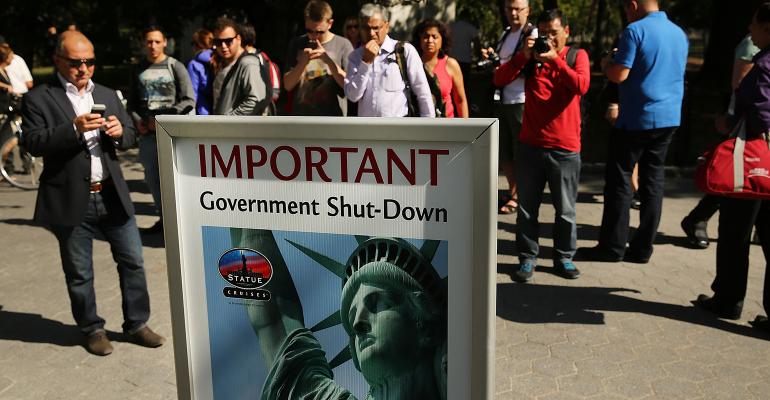 In every instance, market returns have been positive in the 12 months following the beginning of the shutdown.

The prospect of a federal government shutdown seems to arrive with the change of the seasons here in the Northeast. Think about it. We saw threats of a government shutdown in April, to coincide with the arrival of spring, before federal lawmakers passed a one-week stopgap spending measure to keep the government running. They eventually hammered out a funding bill that ran through the end of the fiscal year on September 30. Also in September, shortly before the fall equinox, disagreements over extending the U.S. debt ceiling and other budget priorities for the new fiscal year once again raised the prospect of a government shutdown before a deal was reached, to take us into December.

And now, here we are. With winter about to arrive, so has another threat of a government shutdown, which could come as soon as Friday.

On the basis of how well the 2013 government shutdown polled (72% of Americans opposed it), it’s fair to say the majority of the country does not want another congressional showdown. As John Adams once quipped, “I have come to a conclusion that one useless man is a shame, two is a law firm, and three or more is a congress.” Unfortunately, it’s not clear whether the public’s aversion to government shutdowns will be enough to prevent one from occurring.

Congress must pass legislation by Friday to appropriate money to fund government operations and agencies. Lawmakers may have some flexibility to keep the government open for two weeks beyond the deadline, although that may be easier said than done.

The funding bill requires 60 votes to pass in the Senate. However, promises made to secure passage of the tax bill have opened a deeper fissure between Democrats and Republicans on Capitol Hill. Deficit hawks want a sizable increase in military spending, while Democrats want non-defense spending to rise by the same amount as military spending. Failure to pass an appropriations bill will result in a government shutdown.

Government shutdowns are not without precedent. The government has been shut down 13 times since modern congressional budgeting began in 1976, with shutdowns lasting an average 5.08 days.

Even without a funding bill, essential government functions will continue to operate on Dec. 8 and beyond, with these functions, including, but not limited to, air-traffic control, border patrol, federal prisons, the power grid, mail delivery, disaster relief, food safety inspections, the military and tax collection. In addition:

However, roughly 800,000 federal government employees who are deemed non-essential will be furloughed. An estimated 1.3 million workers who are considered “essential” will remain on the job and receive IOUs to be cashed in when the shutdown ends. As noted above, no federal employees will lose any money.

If a government shutdown occurs, how long it may last is anyone’s guess. Government shutdowns typically end when one or both of the political parties can no longer withstand the public’s ire. In 2013, Congress’s approval rating during the government shutdown fell to a record-low 9 percent. To put it into context, head lice, root canals, and the band Nickleback all polled higher.

At the time, The Tonight Show host Jimmy Fallon quipped, “It’s gotten too bad ... now the approval ratings of Congress hit a record low of just 5 percent. There are a lot of pressing questions, namely, who’s in the 5 percent that still approves of Congress?” Today, Fallon would be looking for the 13 percent of Americans who still approve of Congress, down from a multi-year high of 28 percent in February. (Exhibit 1) After more than two weeks of a government shutdown accompanied by withering public scorn, Congress approved a proposal to fund the government on Oct. 16, 2013, and President Obama signed it into law the next day. It is estimated the U.S. economy lost 0.6 percent of its 2013 projected annualized GDP growth, equal to $24 billion.

Government Shutdowns and the Markets

For investors, the good news is that government shutdowns historically have had limited impact on the stock market. In fact, in every instance, market returns have been positive in the 12 months following the beginning of the shutdown, including a 19.72 percent gain in the year after the 2013 shutdown. The broad market has posted an average return of 17.99 percent in the one-year period following the government’s 13 shutdowns! (Exhibit 2) Whether we like it or not, a government shutdown may soon be upon us. Get ready for a bunch of jokes that sound like this one that Conan O’Brien delivered in 2013, “Our government may be shutting down in a few hours. So, folks, get ready for absolutely no noticeable difference.”

Still, the public noticed and demanded results. Let’s hope cooler heads prevail and the nation averts a shutdown. If it does occur, here’s hoping for a prompt resolution.