FUND FLOWS: Sector Funds Shine Through the Fog of Uncertainty

There’s no shortage of clouds over the current investment landscape.

The prospect of increased U.S.-China trade tensions, growing certainty that there will be four U.S. interest rate hikes this year and the uncertain outlook for energy prices. Going into August, there were no shortage of clouds over the current investment landscape, and this was reflected in the lackluster flows recorded by EPFR-tracked funds.

Of the eight major Equity Fund groups by geography, six recorded outflows for the week ending August 1. Also hit with net redemptions were Balanced, Money Market and Alternative Funds, while Bond Funds collectively posted modest inflows—equal to 0.04 percent of total assets under management—on the back of the $2.5 billion committed to U.S. Bond Funds.

Bank Loan and China Equity Funds and a number of those dedicated to individual sectors were among the few fund groups that attracted positive investor interest in late July, with the latter helped by a generally strong 2Q18 U.S. corporate earnings season.

Overall, EPFR-tracked Bond Funds collectively took in $2.2 billion during the final week of July, while $277 million flowed out of Money Market Funds, $423 million out of Alternative Funds and $1.9 billion out of Equity Funds. Looking ahead, August has been a quieter month in recent years, especially for Equity Funds, as traders and investors head off for summer vacations. Net flows for all Equity Funds were negative in August 2012, 2013, 2015 and 2016. In 2014, they hit a three-month low and in 2017, a 10-month low. 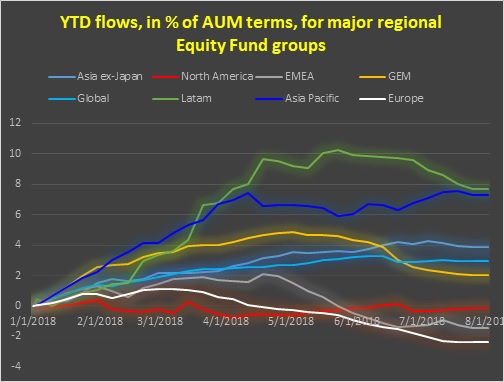