U.S. Equity and Bond funds attracted over $6 billion between them for the second straight week, diverging from other global economies.

Strong U.S. corporate earnings have buoyed equity markets, despite the ongoing trade tensions, while solid second-quarter economic data points to GDP growth reaching 4 percent for the quarter. U.S. Equity and Bond Funds attracted over $6 billion between them for the second straight week, as those investors turned to an economy that is diverging from other global economies.

Overall, the week ending July 25 saw EPFR-tracked Bond Funds collectively absorb another $4 billion. Equity Funds brought in over $1.7 billion in fresh money, while $257 million flowed out of Alternative Funds, and over $4.8 billion out of Money Market Funds. Investors pulled out over $1.4 billion from dividend paying Equity Funds during the week. 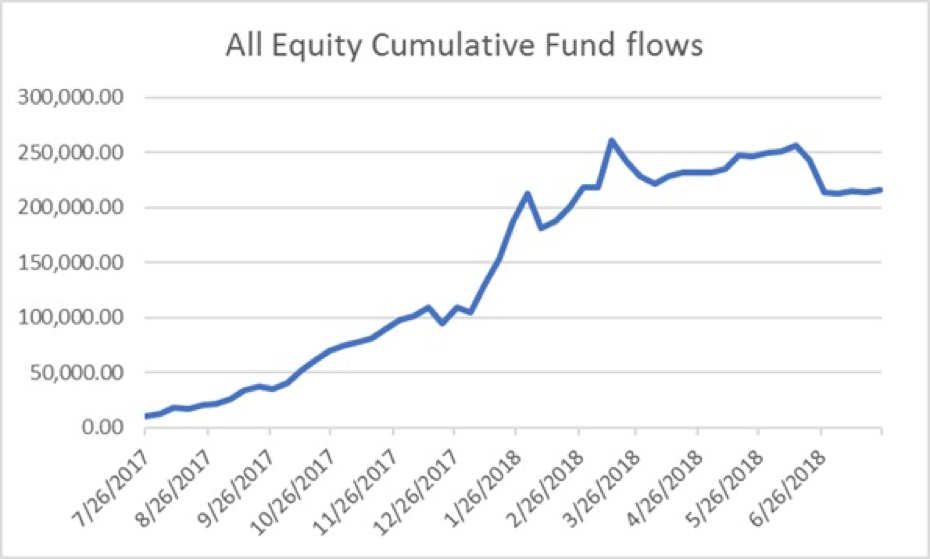 The Chinese government moved to stimulate the economy, as investors risk appetite rose. The offshore yuan declined to its weakest level in more than a year due to an increase in funding to lenders by the People’s Bank of China. Despite the intervention, investors pulled money out of China Equity Funds for the second straight week after 16 straight weeks of inflows.

Uncertainty about Brazil’s political direction ahead of its October presidential election and the unwillingness among the current slate of candidates to champion further economic reforms are taking their toll on investor sentiment towards Latin America’s largest economy, as outflows from Brazil Equity Funds continued for the sixth straight week.

Political uncertainty and populist economic policymaking are also keeping investors cool to EMEA Equity Funds, as investors pulled money from the group for the second straight week. Despite President Ergodan employing a heavy hand in Turkey’s monetary policies, Turkey Equity Funds have attracted inflows for 14 of the past 15 weeks.

At the country level, Spain Equity Funds experienced outflows for the ninth time in 10 weeks, as political uncertainty in the southern part of Europe picked back up. But the U.K.’s struggle to come up with a comprehensive agreement ahead of Brexit next March continues to weigh on U.K. Equity Funds, which have now recorded outflows 17 of the past 20 weeks.

After four weeks of net inflows, investors pulled money out of Japan Equity Funds. Despite the recent retail interest in dividend paying stocks as a way of hedging against trade and tariff risks, Japan Dividend Equity Funds recorded outflows for the second straight week.

At the asset class level, flows into Bank Loan Funds continued for the third straight week, and after four consecutive weeks of inflows, Mortgage Backed Funds posted outflows for the week. Inflation Protected Bond Funds posted outflows after four weeks of taking in new money, and a week after experiencing fresh money, investors pulled money out of Total Return Bond Funds. Outflows from High Yield Bond Funds continued for nine of the past 10 weeks.

Europe Bond Funds experienced inflows for the fourth time in five weeks, as The European Central Bank reaffirmed that it will trim its current quantitative easing program, which includes monthly purchases of up to $30 billion worth of Eurozone debt, again in October and end it in December. At the country level, France Bond Funds posted their largest inflow since the last week of November 2017, while Spain Bond Funds extended their streak of weekly outflows to 11 straight weeks. 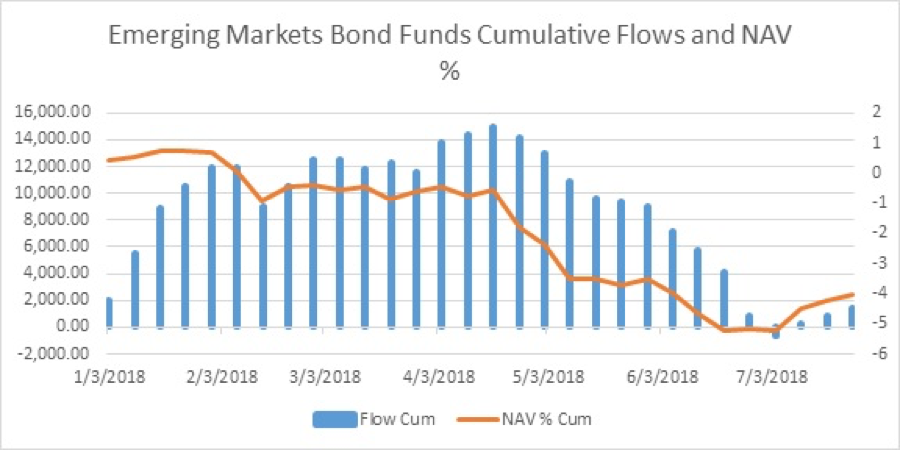 At the regional level, investors pulled money from Latin America Bond Funds for the second straight week. At the country level, China Bond Funds experienced their largest net redemptions since the middle of December 2017.