A rare pocket of value or a mixture of opportunities and value traps?

Among the Country Fund groups posting outflows were Brazil Equity Funds, which experienced net redemptions for the seventh straight week. After the recent sell-off Brazilian equity is, by many measures, cheap, especially if you’re buying it in hard currencies. But investors stopped building their exposure in mid-June, opting instead to sell into a brief rally as they looked ahead to a presidential election in October that few observers think will bring stability and conventional economic policymaking to Latin America’s largest economy.

Managers of diversified Latin America Regional Funds cut their Brazilian exposure to a 24-month low coming into the third quarter, with Mexico the main beneficiary, while the average GEM Fund allocation for Brazil fell to a 27-month low. 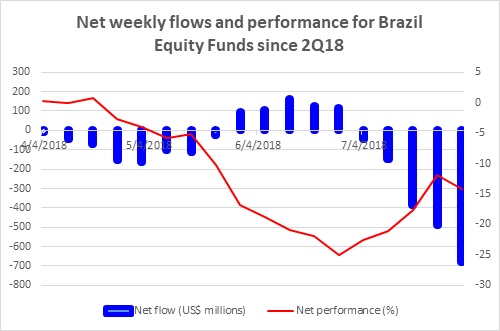 For investors in China, there have been few rallies to sell into this year. But China Equity Funds continue to soak up fresh cash despite the declines chalked up by benchmark indexes and the rising trade tensions with the U.S. Some of this is due to the perception that, with authorities tightening credit standards, some Chinese companies do offer real value at current prices. The lack of alternatives for domestic investors is also playing a role, with tighter regulation of the shadow banking sector, capital controls and measures to cool key property markets, limiting the available investment choices for Chinese citizens.

Among EMEA Country Fund groups, appetite for two dedicated to markets that started the year with strong reform stories continues to wane. Saudi Arabia Equity Funds, which posted 15 straight inflows between late March and late June that included three records, have seen flows falter as the pace of the reform effort championed by ruling crown prince Mohamed bin Salman falls further behind expectations. The same is true for South Africa Equity Funds as it becomes clear just how much work it will take for what it will take for the country’s economy to rebound from the effects of former president Jacob Zuma’s stewardship.