/sites/all/themes/penton_subtheme_wealthmanagement/images/logos/footer.png
Recent
Recent
SEC Charges 18 In International Pump and Dump Scheme
Aug 16, 2022
12 Must Reads for the CRE Industry Today (Aug. 17, 2022)
Aug 16, 2022
Crypto Nomads Move Back to Big Cities Like London, NYC in Bear Market
Aug 16, 2022
The Rise of the One-Day Workweek for Office Commuters
Aug 16, 2022
Featured
The 10 Best and 10 Worst States in Which to Retire in 2021
Jul 15, 2021
Poll: 15 Classic Books on Investing and the Markets
Apr 03, 2020
Fifteen Must-Listen Business Podcasts for Advisors
Aug 14, 2020
Celebrity Estates: Jay Leno and Planning for Classic Car Collections
Feb 22, 2022
Bloomberg
brought to you by 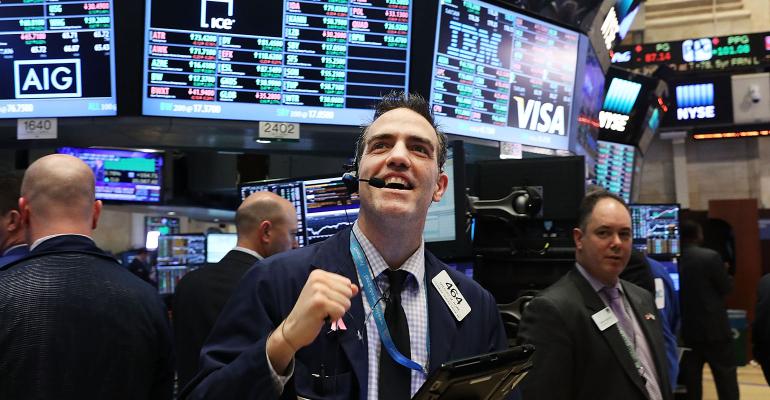 Is it good or bad when markets surge without volatility?

(Bloomberg) --If the bull market is worried about dying, it’s not letting on.

Eight years along and no existential crisis plagues this advance, whose unbroken march from the depths of the Great Recession is the second longest ever. Valuations are stretched and going by its age the rally is in rarefied air. But volatility, the ticker tape of investor anxiety, is nowhere to be found. So profound is the market’s peace that a debate is raging over whether it’s healthy: are investors willfully blinding themselves to danger in the era of Donald Trump? Whether they are, the result has been manna for anyone who’s held on. Almost $3 trillion has been added to equity values since November.

“Investors should now be on the lookout for a fear-of-missing-out mindset that could signal overconfidence and sound the final lap,” said Sam Stovall, chief investment strategist at CFRA in New York. “Volatility will remain a potential challenge to the intestinal fortitude of many investors and cause their emotions to become their portfolio’s worst enemy.”

At 250 percent, the advance in the S&P 500 Index since 2009 has surpassed any bull market at the eight-year mark, plus all those that ended earlier, according to data compiled by CFRA that goes back to World War II. While history shows stocks tend to get more volatile as rallies drag on, it’s not the case now. In the past 12 months, the S&P 500 has spent only 23 days rising or falling 1 percent, compared with 85 days during the eighth year of the 1990-2000 run. The bull market, driven by easy monetary policy from central banks and a doubling in corporate profits, shows few signs of waning as it heads into its ninth year. Since Trump’s election in November, the S&P 500 has jumped 11 percent, going 55 days without an intraday swing of 1 percent, the longest since at least 1982. The index added 0.2 percent at 9:50 a.m. in New York.

Is it good or bad when markets surge without volatility? On trading desks around Wall Street last week, charts surfaced purporting to show that “complacency” is at a record high by dividing the S&P 500’s price-earnings ratio of about 22 by the CBOE Volatility Index, now near 11. The quotient exceeded levels during the dot-com bubble.

Even the Fed has noticed the lack of turbulence. In the minutes from the central bank’s last meeting, a few officials “ expressed concern that the low level of implied volatility in equity markets appeared inconsistent with the considerable uncertainty attending the outlook” for Trump to deliver on pro-growth agenda.

To Michael Shaoul, chief executive officer of Marketfield Asset Management in New York, neither P/E nor the VIX is useful in determining a market top on its own -- and it makes no more sense to look at a combination of the two.

“This idea can be summed up by the old term ‘two wrongs don’t make a right,”’ Shaoul said in an interview. “We can complain that valuations are no longer appealing and that the steady staircase-like move is unnerving, but we cannot say that these factors in themselves mean the end is nigh.”

Steady gains have coaxed investors back to stocks. They poured $60 billion into American equity ETFs and mutual funds in the last four months, an amount recorded only twice over any similar stretch in this bull market, data compiled by Investment Company Institute and Bloomberg show. From 2009 to 2016, withdrawals exceeded $200 billion.

Investors may be forgiven for their reluctance to embrace equities. While the market ruptures that followed Britain’s June vote to exit the European Union and Trump’s November election proved temporary, they were among the five instances in just two years of what Deutsche Bank AG categorizes as an extreme shift in equity volatility. Before that, it took two decades to record five such events.

And the current tranquility does appear to be a bit out of touch with history. In an average bull market, the number of days with 1 percent move usually more than doubles to 65 in year seven after falling in the first three years. During the Internet boom, the only post-war bull market that lasted longer than this one, year nine saw such days surge to 95.

While Trump’s plans to lower taxes and boost public spending may accelerate a rebound in corporate profits, anyone anticipating the peaceful advance to continue may be making a mistake, according to John Stoltzfus, chief market strategist at Oppenheimer & Co. in New York. Catalysts abound for volatility outbreaks, from Fed tightening to Trump disappointment to risks associated with the French presidential election and China’s currency policy, he wrote in March 6 note.

“The ever so unloved and disdained bull market might have more upside than even its earliest adapters and supporters project,” Stoltzfus said. But “With the transition taking place in Washington, changes in monetary policy stateside as well as upcoming elections abroad with issues around populism and nationalism, we expect the market will not show much tolerance should it detect investor complacency.”