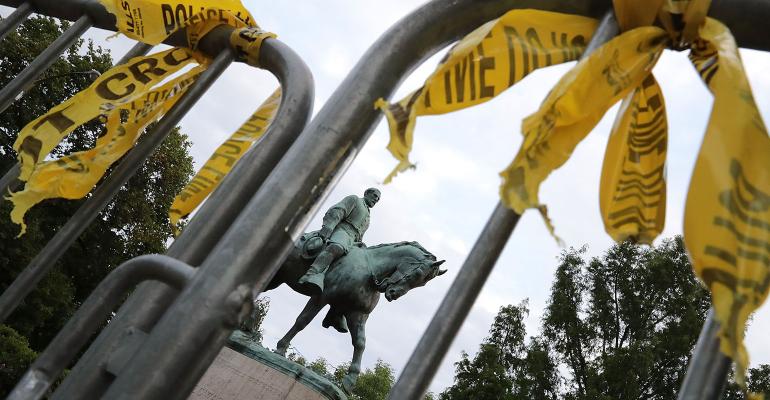 The S&P 500 Index gained less than 0.1 percent over the second-quarter earnings season, the second-worst performance in 4 1/2 years.

(Bloomberg) --U.S. companies are churning out some of the best profits in a decade. But the potential for them to get lost in the political din is rising.

The S&P 500 Index gained less than 0.1 percent over the second-quarter earnings season, the second-worst performance in 4 1/2 years of reporting results. It’s a reversal of a long-running trend that has seen strong corporate results become one of the bull market’s most reliable antidotes for stock malaise, and one that comes as investors fixate on Washington.

Things looked fine until two weeks ago when President Donald Trump’s warnings to North Korea and the conflagration around the Charlottesville protests sent markets reeling.

“Trump is having a relatively negative impact on the market because you don’t know what will come out of his mouth next -- or out of his thumb,” said Malcolm Polley, who oversees $1.1 billion as president and chief investment officer at Stewart Capital Advisors LLC in Indiana, Pennsylvania. “If people could just focus on what happened with earnings, you’d have a better situation.” The potential for politics to ruin everything was on the mind of Ray Dalio, the founder and co-chairman of Bridgewater Associates, in an essay published yesterday on LinkedIn. They will probably play a greater role in markets than any time in our lifetimes, he wrote.

“While I see no important economic risks on the horizon, I am concerned about growing internal and external conflict leading to impaired government efficiency (e.g. inabilities to pass legislation and set policies) and other conflicts,” he wrote.

Economically, it was a stellar quarter for profits. Operating income in the S&P 500 rose 11 percent, building on a 14 percent increase in the previous three months for the first back-to-back gains exceeding 10 percent since 2011. Companies surpassed estimates by almost 1 percent on the sales line and 4.5 percent in profits, among the higher beat rates of the bull market.

You wouldn’t have known it in the market. S&P 500 companies fell an average 0.6 percent the day after announcing results, data compiled by Bloomberg show. Individual stocks also sat still after the release of better-than-estimated results, the first time since 2000 that positive surprises were not rewarded, according to Bank of America Corp.

To be sure, plenty is contributing to the muted reactions besides the distractions of Washington. The S&P 500 is already up more than 8 percent this year and trades for 20.8 times annual profits, among the highest valuations since the dot-com era. Along with anxiety over Trump investors are contending with the first Federal Reserve tightening cycle since the financial crisis. Morgan Stanley strategist Michael J. Wilson said the turmoil surrounding Trump may prompt the Republican party to distance itself from the White House, raising the potential for tax cuts. Investors should buy the dip since the drivers for the bull market, including profits, remain intact. The S&P 500 will rise to 2,550 by mid-September, he forecast.

The pullback “will once gain prove to be short and shallow,” Wilson wrote in a note Monday.

But rising valuations and the Fed could also be part of an argument for limiting unnecessary distractions. Earnings are poised for a similar if slightly less-spectacular improvement in coming quarters, with growth averaging more than 9 percent through March of next year, analyst estimates compiled by Bloomberg show.

The last few weeks stand in contrast to the first four months of Trump’s presidency, when the S&P 500 rallied more than 10 percent. Investors have pared bullish bets on stocks tied to Trump’s growth agenda, such as small-cap companies, while pushing measures of short interest near the highest levels of the year.