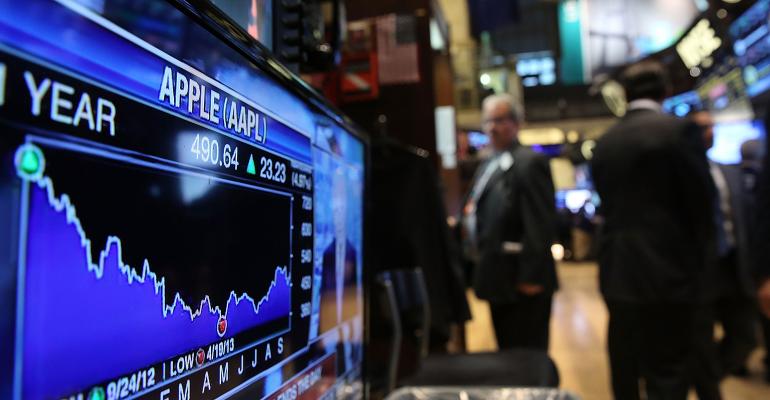 Even with tech giants like Apple and Google dominating gains, valuations are still far from extremes seen at 2000 peak.

(Bloomberg) --Terrified that rallies in Facebook Inc., Amazon.com Inc. and Google portend a millennial catastrophe along the lines of the dot-com bust? Relax. Going by one doomsday clock, it’s only 1997 in bubble years.

So says Leuthold Group LLC in a study that plots today’s valuations against the salad days of Internet mania. Based on its model, which measures the S&P 500 Index by six factors including earnings, dividends and cash flow, the Minneapolis-based firm found stocks currently trade at the multiple they first reached 20 years ago. That is, 1997, when there was still 2 1/2 years and 60 percent to go in what became the longest bull market on record. While elevated multiples are usually associated with lackluster returns, Leuthold’s study may provide a mild salve to investors at a time when everyone from the Federal Reserve to Paul Tudor Jones are voicing concerns over equity valuations.

“You’ve seen CEO, consumer confidence bouncing back, there is more interest in the stock market, but it’s still nothing like late 1990s,” Doug Ramsey, Leuthold’s chief investment officer, said by phone. “If cyclical conditions remain positive, this thing has got some room to melt up.”

Leuthold’s study is hardly an all-clear signal. Saying stocks are cheaper than they were at the top of the biggest valuation bubble in modern history is a long way from saying they’re cheap. Mostly it dramatizes the excesses of that era, while reminding people that not all rallies look alike.

Nor are they unique. One warning sign reminiscent of the sunset of the dot-com era that is true now is concentrated leadership in tech giants. Not only do those firms fill the ranks of the five largest U.S. companies for the first time, their gains have also far outpaced the rest of the market.

Apple Inc., Google parent Alphabet Inc., Microsoft Corp., Facebook and Amazon.com have climbed an average 19 percent this year, almost triple the gain in the S&P 500. Accumulating a total of 47 points, their contribution is about a third of the index’s increase. Last year, the five largest stocks made up only 17 percent of the market’s gain. The top-heavy performance is a signal that investors are chasing a small pool of big winners, a trend that if it persisted could create problems should valuations become untenable. In the final 12 months leading up to the 2000 peak, a version of the S&P 500 that strips out market-value biases trailed the regular index by 14 percentage points.

Nowadays, despite the recent outsized returns in mega-caps, the equal-weight S&P 500 has tracked the market-weight version pretty closely on both three-month and 12-month horizon.

More importantly, tech giants are much cheaper than they used to be. Apple, the largest company, trades at 17 times earnings. That’s less than half the multiple of Microsoft in 2000, the No. 1 at that time.

“There are a lot of next-generation themes that are developing, creating the need for technology,” said Michael Sheldon, the chief investment officer at RDM Financial Group at HighTower in Westport, Connecticut. “In the late 1990s, companies were coming public with very uncertain business models and no profit.”

Investors’ love for tech shares may smack of the Internet frenzy, with the Nasdaq Composite Index crossing 6,000 Tuesday for the first time. But the role that the group plays in the market has evolved from speculative bets to safety trade.

As in 2000, growth prospects explain much of the interest, with tech firms offering profits that are expanding almost twice as fast as in the S&P 500. A deeper look, however, shows a less typical attraction -- With debt levels and effective tax rate already trailing many other industries, tech shares also serve as a shelter with less sensitivity to changes in taxes and interest rates.

The same kind of desire for safety has persisted throughout this bull market as investors flock to stocks that offer low volatility or dividend yields. As a result, while the broad market cap-based valuations still have a long way to go to reach extreme readings, Leuthold found that the same matrix for the median S&P 500 stock shows the “time clock” is closer to the terminal point, in March 1998.

“You have this clamor for income from the stock market as well as stability because people are shaken to the core” after experiencing two bear markets in a decade, Ramsey said. “The mantra has been safety, stability and income, and that’s become over-valued in a way growth was 17 years ago.”