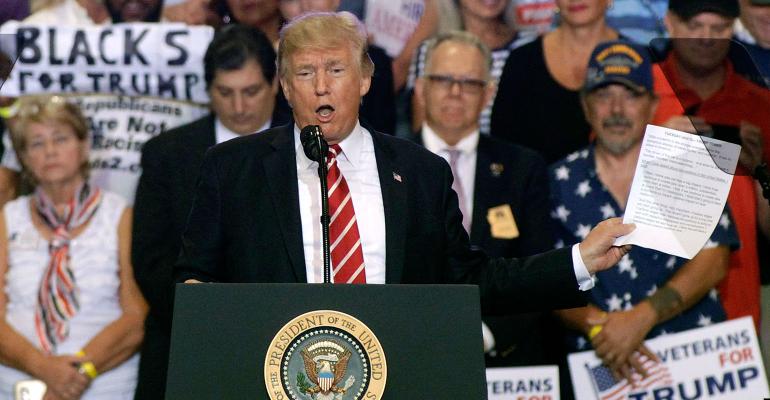 These days, it’s a fractious White House fomenting global political risk that for a decade had emanated from Europe.

By Robert Brand and Cormac Mullen

(Bloomberg) --Political instability, money problems and economic growth still top the list of threats to global markets. It’s just that the main players have swapped roles, according to Eurasia Group.

“For much of the post-crisis period, U.S. money, Chinese growth, and European politics have mattered most” to investors, New York-based director of global strategy at Eurasia, Karthik Sankaran, wrote in a research note this week. “But developments over the past year suggest that markets should be paying attention to U.S. politics, European growth, and Chinese money.” These days, it’s a fractious White House fomenting global political risk that for a decade had emanated from Europe, according to Sankaran. China is no longer the world’s growth driver as it grapples with a bad-debt situation that’s erupted in the decade since the U.S. righted its own banks after they collapsed under the weight of consumer loan defaults.

Meanwhile, as political turmoil subsides in Europe, the region is helping to offset faltering demand from China. Euro-zone growth, while not as significant a contributor to global expansion, has still come as an “unanticipated positive surprise for the global economy,” Sankaran said.

But it’s U.S.-related political risk that remains center stage, according to Eurasia. The greenback is the worst-performing currency this year among 16 major peers, according to data compiled by Bloomberg. “Further erosion of President Donald Trump’s domestic policy coherence, as well as concern over his unpredictability in international affairs will continue to weigh on the dollar versus developed market safe-haven currencies, such as the yen, the Swiss franc and even the euro,” Sankaran said.