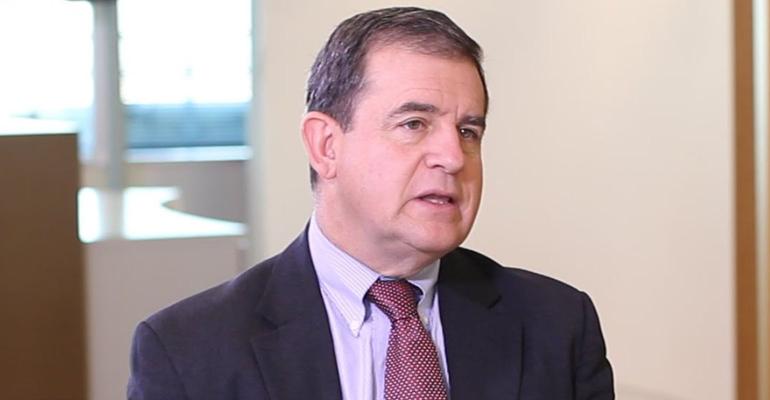 Bob Doll’s 10 Predictions for 2018: From a Smooth Gallop to a Bumpy Grind

The Nuveen equity strategist’s predictions for the economy, the markets and the mid-term elections.

2017 was an outstanding year for the stock market, with positive total returns every month and high earnings growth each quarter. But Bob Doll, senior portfolio manager and chief equity strategist at Nuveen Asset Management, believes we’ll move from a smooth gallop to a more bumpy grind this year.

“A bumpy grind is a far more typical market; a smooth gallop is typically unheard of,” Doll said, presenting his 10 market predictions for 2018. “Nothing bad about 2018. It’s just not the excess versus expectations that we witnessed all the way up and down the page in 2017.”

Confidence, for example, was rising in 2017. He expects that to stay at high levels, but will probably flatten out in 2018, which means exceeding expectations becomes difficult.

Doll has a pretty good track record on his annual predictions. If you look at his 2017 predictions, he got 7 out of 10 correct.

1. U.S. real GDP reaches 3 percent and nominal GDP 5 percent for the first time in over a decade.

Real GDP—economic growth absent inflation—has bumped around 2 percent for the last couple of years, but Nuveen expects it to rise to 3 percent this year. Why? The tax cut, for one. When the last major tax bill came through in 1986, trucking—a big barometer of economic activity—moved to much higher levels.

In addition, recessions start on average six years after we reach a new leading indicator peak, and we hit a new high in leading economic indicators in the second half of last year.

2. Despite ongoing protectionism, the global expansion continues with the fewest countries in recession in history.

The number of countries in recession is in the single digits, and it’s likely to remain low for some time, Doll said.

“Ironically, that’s happened with global trade pretty flat. This is unusual. When we are in a global economic growth pattern—and in 2017 we achieved synchronous global growth—usually the fastest growing parts of most countries’ economies is foreign trade—imports and exports.”

3. Unemployment falls to the lowest level in nearly 50 years as wage growth is the highest since the Great Recession.

If you look at historic U-3 unemployment rates, it has moved down from the height of the Great Recession to the current 4.1 percent. When we clear 3.9 percent of a decade and half ago, then Doll believes it’ll be clear sailing down to 3.5 percent.

Historically when unemployment gets down to 5 percent, that’s when wage growth picks up to the 4 percent level. Doll expects 3 percent wage growth by the end of the year.

4. The yield curve flattens, but does not invert, as the 10-year Treasury yield reaches 3 percent for the first time since 2014.

In the late 70s and early 80s, we had five years in a row when rates moved higher. From 2014 to 2017, rates trickled higher, and Nuveen expects a more significant increase this year.

Doll’s reasons included the fact that the great monetary experiment is unwinding; the world is becoming less deflationary; central banks have moved from easing to normalizing to tightening; there’s robust economic data; capacity utilitization rates are rising, especially labor; and bonds are expensive versus history.

5. Stocks enjoy the longest bull market in history, but experience a 5 percent plus correction after the longest period without one.

Stocks were up every month in a row for the last year; in August, this bull market will become the longest in history. And not only have we not seen a 5 percent pullback, we haven’t even seen a 3 percent pullback in 12 months.

“That is unusual, abnormal and unlikely to continue,” Doll said. “We need to condition investors to realize that the good news is stocks have the highest long-term rate of return of any asset class, but there’s a price to pay for that extra return, and that is you’re on a roller coaster ride. And we’ve not seen much of the down part of the roller coaster. We will see it in some point in time.”

Since 2012, the S&P 500 total return has exceeded earnings growth, and Nuveen expects the pendulum to swing. 2018 earnings revisions are unlikely to remain as buoyant as 2017, and low volatility years are often followed by higher volatility years.

7. Stocks beat bonds for the seventh consecutive year for the first time in nearly a century.

From 2012 to 2017, stocks have outperformed bonds because stocks went up significantly and bonds went up slightly. Doll expects stocks to continue to outperform, but it will be a year where stocks beat bonds because bonds are down.

Doll said some people question whether stocks will get hit if rates rise. But a major de-rating of stocks is unlikely as long as growth and earnings are improving.

8. Corporate capital expenditures increase at the expense of share buybacks.

Corporate capital expenditures have been light this business cycle, and Nuveen expects that to increase this year. Doll’s reasons include companies’ strong profitability, low cost of capital, improved economic confidence, lowered corporate taxes, the repatriation of deferred foreign profits, and the expensing of capex in the new tax bill. With the tax reform, productivity could improve 2 percent.

Nuveen believes the telecommunications sector has a big yield premium, and that it’s currently under-owned. It could be a defensive play if the markets get choppy, and the best play is large network providers.

Healthcare is the best positioned defensive growth sector, and the pipelines are improving,

Doll said biotech and managed care are ways to play it.

10. Republicans lose the House, retain the Senate and further distance themselves from President Trump.

Doll expects the Republicans to lose 25 to 35 seats in the House, allowing the Democrats to recapture it. In midterm elections, the incumbent party tends to lose a lot of seats, he said.