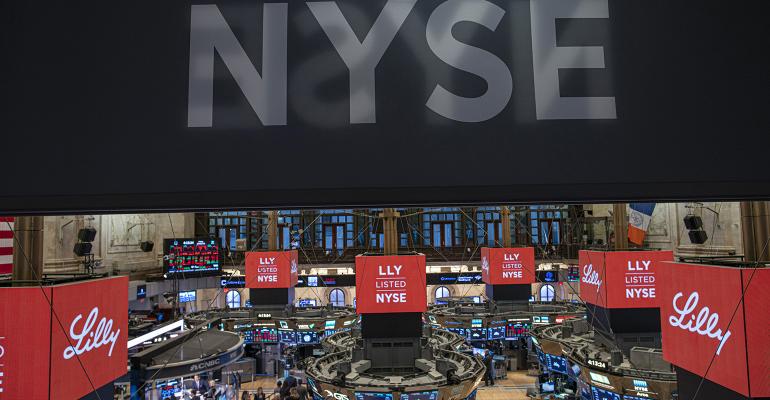 As the S&P 500 Index once again tests its record high, the top five publicly-traded American companies now make up a record 18% share of the benchmark’s capitalization—higher than the tech bubble.

(Bloomberg) -- At least one thing is clear after a tumultuous start to the year: For stock investors, bigger has never been better.

As the S&P 500 Index once again tests its record high, the top five publicly-traded American companies now make up a record 18% share of the benchmark’s capitalization—higher than the tech bubble, Morgan Stanley said on Monday.

U.S. large-cap equities have jumped to near the highest in more than 10 years against small caps in the early days of this new decade. Companies that make the most money overseas are near the highest since April versus domestic peers, Goldman Sachs baskets show.

While a surge in these behemoths is good news for anyone simply chasing the index higher, to some strategists it’s a sign investors have lost their appetite for risk amid fears the economic cycle is set to slow. Thanks to innovation and market dominance -- the bull case goes -- these tech giants can deliver profit growth regardless of what happens in the economy.

Their outperformance threatens to upend many popular 2020 themes in stocks, notably a preference for global shares over U.S. equities, as well as for riskier value names.

A strategy of picking companies based on their earnings-growth promise beat one of buying cheap-looking shares by the most since 2011 last week, Bloomberg data show.

In some corners of the market, it’s all contributing to a sense that the apparent optimism in equities may be a head fake.

Small-cap stocks have lagged not only their bigger cousins but also a rally in high-yield credit, suggesting investors are avoiding the cohort because they don’t expect the kind of growth that would support smaller companies.

“Investors are much more cautious than we think,” said Sophie Huynh, a multi-asset strategist at Societe Generale SA in London. “If there is really a recession, the small-caps will get hurt because of credit risk plus the equity beta.”

In an aging business cycle, many believe activity is more likely to slow down than to rev up and therefore profit growth will be weaker -- punishing small-caps disproportionately. Tighter margins have led to more disappointing earnings among the group and profit estimates are likely to get cut further, Wilson and his team wrote last week.

“In a late cycle environment (like the one we believe we are in), the market tends to become more discerning in terms of punishing lower quality companies,” they said.

The Russell 2000 Index of small-caps has a much lower weighting of technology companies and a higher one of financial services firms. The former sector -- beloved for its ability to generate growth regardless of the economic cycle -- has soared anew in 2020, while the latter tends to be more dependent on the macro environment.

“Investors want quality and that means big- or mega-caps,” said Gregory Perdon, co-chief investment officer at Arbuthnot Latham, a private bank in London. “High-yield is safe since rates will stay low, therefore lower re-financing risk and hunt for yield. So investors feel like nothing can go wrong.”

“If the recovery turns out to be more robust, there is an opportunity in the more cyclical parts of the market,” the Morgan Stanley team wrote on Monday. “It is still too early to make a big bet on cyclicals or small caps but a good entry point may be approaching.”

To contact the editors responsible for this story:
Sam Potter at [email protected]
Sid Verma