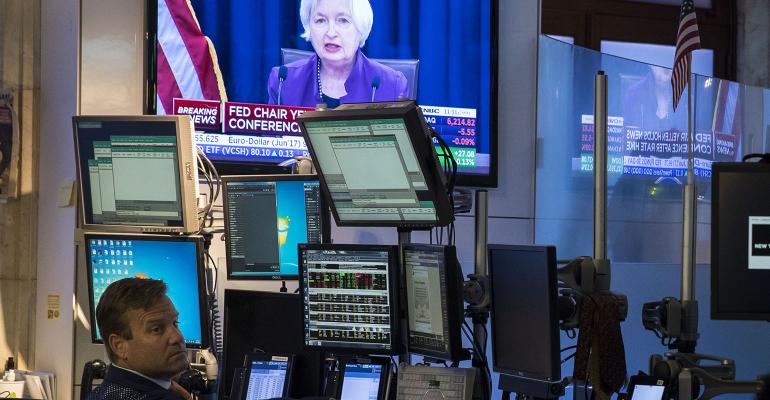 Bank Investors Lean Too Heavily on Fed to Stoke Rally

Investors who are betting on a significant Fed boost may end up disappointed.

(Bloomberg Gadfly) --Shares of the nation's largest financial firms have been rising lately, but investors shouldn't bank on the rally continuing.

The KBW Bank Index is up nearly 8 percent since early September, far better than the 1.3 percent gain for the broader S&P 500 index in the same period. Some of the best performers recently have been the large regional lenders, like Citizens Financial Group Inc., which is up nearly 14 percent in two and a half weeks. But all of the biggest U.S. banks have gained, too. Scandal-plagued Wells Fargo & Co. leads that pack, up nearly 9 percent. Bank of America Corp. is up nearly 8 percent. The recent rally seems to be fueled by the Federal Reserve, which said definitively last week that it would begin to wind down its quantitative easing bond-buying program. That, along with the fact that a majority of Fed policy makers seem to expect at least one more rate increase this year and three more next year, have revived hopes of higher long-term interest rates and larger lending profits. Indeed, the recent bank rally has pretty much tracked the rebound in long-term yields. Bank stocks started climbing on Sept. 8, the same day that yields on 10-year Treasury bonds bottomed as well.

But investors who are betting on a significant Fed boost may end up disappointed. First of all, while it seems logical that bond prices would fall, and yields, which move in the opposite direction, would rise when the Fed begins to ditch its $4.5 trillion portfolio, that might not be the outcome. In 2010, when the Fed temporarily halted bond purchases, long-term yields fell. They rose in 2013 when the Fed was aggressively buying again. And the Fed's QE exit is expected to be extremely slow -- analysts from KBW last month predicted it would take more than six years -- further dampening any market impact.

Second, even if yields do rise, it's not clear how much that will bolster bank earnings. Rather than the absolute level of rates, lending profits depend on the spread between what banks have to pay for short-term funding, typically from savers, and what they can charge longer-term borrowers. Fed research in April found that QE likely cut long-term rates by 1 percentage point, which means a reversal would take 10-year Treasury rates to roughly 3.22 percent. But given that the majority of Fed governors expect four quarter-point rate increases by the end of 2018, the spread between short- and long-term rates is likely to remain mostly unchanged. What's more, it would take a big move in spreads to get lending net-interest margins -- which are still lower than they were before the financial crisis and far lower than they were in the 1980s and 1990s -- back to normal. Lending has also been slowing lately, which may make it harder for banks to capitalize on better loan pricing. And the end of QE won't be all good news for the banks. One booster of financial profits in recent years has been the growth of cheap deposits to fund lending. But the end of QE, which pumped money into the economy, will most likely cause deposits to shrink.

Finally, bank stocks aren't exactly cheap. For a while after the financial crisis, the big banks on average were trading either close to or at a discount to the best guess of their net worth. However, the big six -- Bank of America, Citigroup Inc., Goldman Sachs Group Inc., JPMorgan Chase & Co., Morgan Stanley and Wells Fargo -- now trade at 1.45 times their tangible book values, perhaps not outrageously expensive but not a bargain either. Of course, if the economy heats up, or if President Donald Trump is able to roll back Dodd-Frank regulations, the environment could improve for the banks and their shareholders. But investors bidding up bank stocks on Fed action alone may soon find themselves overdrawn.