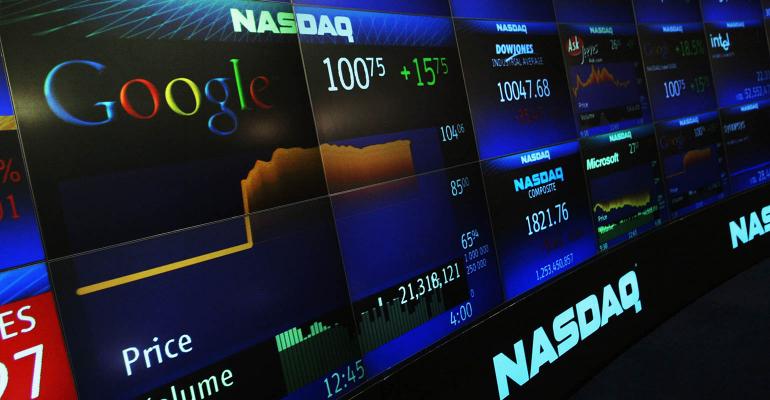 (Bloomberg) -- Don’t look now, but technology companies are exerting more control over the U.S. stock market than any time since the internet bubble.

Fueled by three-year rallies in which Microsoft Corp. and Alphabet Inc. doubled, Amazon.com Inc. tripled and Facebook Inc. surged fivefold, computer and software stocks have increased to almost 21 percent of the S&P 500 Index’s value, near a 15-year high. The distance between tech and the next-biggest group, banks, is close to the widest ever.

While the divergence rings warning bells for anyone who lived through the crash of 2000, tech’s ascent has its virtues, and is in some ways a sign of the market’s health. For one, it reflects the diminishing influence of banks, which held a much larger share of the S&P 500 in the years before the financial crisis. It’s also evidence of rationality: tech is one of the only industries where earnings continue to expand.

“The underlying economy is moving more toward technology, so to have it make up a bigger part of the market is probably not a disconnect,” said Brent Schutte, Milwaukee-based chief investment strategist of Northwestern Mutual Life Insurance Co.’s wealth-management unit, which oversees $89 billion. “This is not me saying that technology is cheap,” he said. “It’s just taking away that argument that this is a bubble waiting to happen.”

Swelling in the market’s largest group comes amid warnings from bears such as billionaire investor George Soros that stocks are at risk for a repeat of the 2008 crisis. While widening valuations and demand for safety trades such as utilities and low-volatility shares have stirred anxiety, the resurgence in tech shows one cornerstone of the seven-year bull market is behaving as it normally does.

The Nasdaq Composite Index and S&P 500 Information Technology Index have both rallied 23 percent since markets bottomed in February. Semiconductor companies like Nvidia Corp., Applied Materials Inc. and Micron Technology Inc. have led the S&P tech gauge, while only one of its 68 members, First Solar Inc., is down over the stretch. The Nasdaq closed at an all-time high on Aug. 15, and has climbed for nine consecutive weeks, the longest since 2009.

Tech companies are extending leadership at the fastest rate in four years. Their representation in the S&P 500 has increased by more than 1 percentage point to 20.9 percent this quarter, about 5 percentage points higher than financial shares. From Apple Inc. to Microsoft, mega techs now occupy half of the top 10 spots in ranks of the most valuable American companies, matching the number at the peak of internet mania.

Unlike the dot-com era, when investors snapped up web companies with promise but little profit, today’s gains are built on earnings, driven by demand for products such as Apple’s iPhone and Google’s web ads. Their strength was on display during the earnings season, when companies delivered the biggest beat among industries. While third-quarter growth estimates just turned negative for the S&P 500, the group is expected to expand profit by 2.8 percent.

“The phenomenon is as much of a function of tech being a strong growing sector in terms of earnings as it is financials fading the scene,” said Rich Weiss, the Los Angeles-based senior portfolio manager at American Century Investments, which oversees about $154 billion. “It’s healthy growth. I don’t believe we need to worry about a tech bubble here or in the near future.”

Computer and software makers have been the biggest industry in the S&P 500 for the duration of the bull market that began in March 2009, with their influence widening at the end of 2015 and again now. That’s a far longer reign than the 3 1/2-year stretch that began at the end of 1998, which saw their share of the index reaching almost 35 percent. This time around, the weighting has generally held below 21 percent.

“Does the fact alone that the largest sector in the index eclipses a weighting threshold make the market vulnerable? At a high level, the answer is no, but with a caveat,” said David Kahn, managing director at Convergent Wealth Advisors in Los Angeles, where the firm oversees about $4.5 billion. “What concerns us is when we see a sector commanding far more in market cap than in profit participation relative to history. That is an indication of a momentum-based bubble.”

By that measure, a bubble does not appear to be in the making. Information technology accounted for about one-fifth of the full index’s operating earnings in the 12 months through March, almost precisely its market weight. In 2000, when technology stocks commanded about a third of the gauge, the group’s profits were 15 percent of the total.

Expanding earnings have helped keep valuations in check. While faltering profits have driven up the S&P 500’s multiple to 18.6, the highest level in more than a decade, computer and software companies are trading at a ratio that’s 11 percent below their 20-year average. At 18 times forecast income, the industry is valued at a discount to the market.

“If tech gets to the point where they’re not growing at all, then it would be really a red flag -- that would signal one of the strongest and fastest growing area of the economy is stalled out,” said Curtis Holden, a senior investment officer in Houston at Tanglewood Wealth Management, which oversees $870 million. “There is probably some realization in the market that ultimately for stock values to go up, there’s got to be some growth and tech has a little bit of edge.”