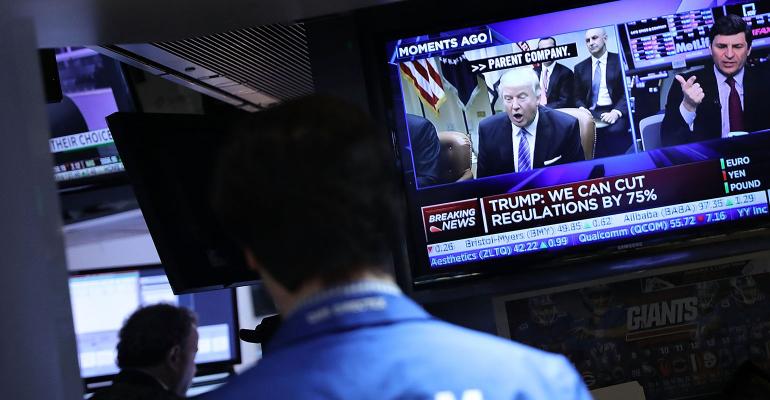 All's Not Calm Under Stock Market Surface With Trump on Tap

With President Donal Trump expected to give specifics of his domestic policy agenda, the markets are expressing caution.

(Bloomberg) --Behind the scenes of a stock market on a tear since Election Day are signs that investors have begun to worry about a rupture.

They’re anxious before Donald Trump’s address to Congress Tuesday, after a run-up that lifted the Dow Jones Industrial Average every day since the president promised a “ phenomenal” plan to cut taxes. One signal: companies with revenue less sensitive to economic growth, such as utilities and health care, have led the market for three weeks, a departure from the previous three months, when banks rallied the most.

This is the only time that the Dow has climbed to new highs over three weeks while cyclical shares trailed defensive stocks, according to data compiled by Sundial Capital Research Inc. that goes back to 1926. Meanwhile, demand for hedges is rising even as the CBOE Volatility Index sits about 25 percent below its five-year average. Large speculators have raised net positions in VIX futures from a record low, pushing them up in three of the past four weeks, Commodity Futures Trading Commission data show.

The positioning highlights investor caution at a key moment for equities under Trump, in which he’s expected to give details of his agenda. While optimism over tax cuts and infrastructure spending has contributed to a rally that has added more than $2 trillion to equity values, strategists including Goldman Sachs Group Inc.’s David Kostin are urging clients to buy protection against the “asymmetrical” risk in a market full of hazards. Among them is that lower taxes may not take effect until 2018, he wrote in a note Friday.

“President Trump’s speech on Tuesday needs to get specific because this market has risen on expectations, which have yet to crystallize,” said Tom Siomades, head of Hartford Funds Investment Consulting Group in Radnor, Pennsylvania, where the firm oversees $78 billion. “If it is obscure or has little clarity, you could begin to see the market get more cautious.” Persistent gains in stocks haven’t dented the popularity of the iPath S&P 500 VIX Short-Term Futures ETN, a security that tends to rise when the market falls. While the S&P 500 hovers near its all-time high and the note has lost money every year since its inception in 2009, shares outstanding in the ETN have increased in each of the last three weeks, reaching a record. Short interest started to fall after climbing to a 10-month high earlier this month, according to data compiled by IHS Markit.

That the market leadership has shifted to defensive shares as Treasury yields decline signals that investors are preparing for trouble, according to Tony Dwyer, a strategist at Canaccord Genuity Group Inc.

“Sector action not fitting upbeat economic narrative,” he wrote in a Feb. 26 note . “The recent sector performance and drop in U.S. Treasury yields suggest a period that should bring more volatility and minor turbulence.”