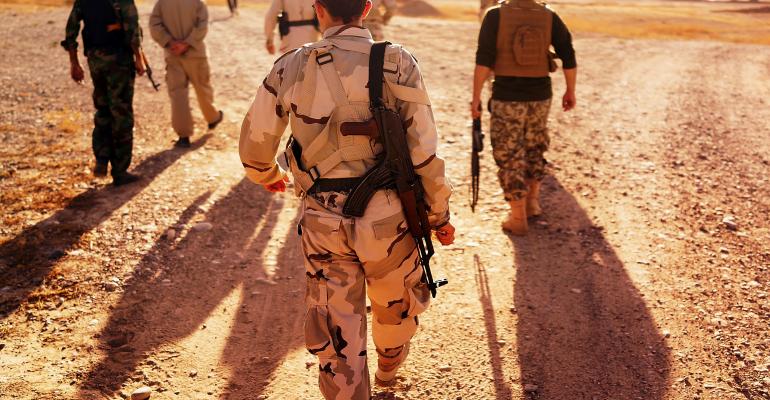 <p>Kurdish soldiers with the Peshmerga keep guard near the frontline with Sunni militants on the outskirts of Kirkuk, an oil-rich Iraqi city. </p>
Investment>Equities

Advisors say that of all the geopolitical risks in the world right now, the Islamic State of Iraq and Syria (ISIS), the extremist Sunni Islamic group attempting to establish a caliphate in the Middle East, is the most threatening, and many are bracing for its impact on the markets by taking a more conservative approach in clients’ portfolios and reducing exposure to international markets.

“We consider the ISIS and ISIL risks serious and are headwinds for future portfolio performance,” said Edward J. Kohlhepp Sr., owner and president of Kohlhepp Investment Advisors in Doylestown, Pa. “Although the markets have been resilient in shaking off almost all of the geopolitical risks to date, we feel that a major event in this country or abroad could cause a jolt.”

Kohlhepp said he has repositioned client portfolios more conservatively over the last year, in anticipation of a correction. His firm has stayed in bonds, despite talk of rising interest rates, to mitigate risk.

Geopolitics have dominated the news headlines over the last couple months, with President Obama outlining plans to expand the U.S.’s military campaign against ISIS this week. This follows the beheading of two American journalists by the group. Meanwhile, the Ukraine/Russia conflict wages on, although the Ukraine said most of Russia’s forces have moved out of its country. The European Union announced new sanctions on Russia today. After some of the deadliest violence in years, Israel and Gaza agreed to a long-term ceasefire. More uncertainty looms in the United Kingdom, where Scotland is set to vote on an independence referendum on Sept. 18.

“Every client conversation includes some discussion of the unending problems around the world,” said Charles Parks, president and CEO of C.F. Parks and Company in Salisbury, N.C. “In my mind ISIS would like nothing better than to spark WW3 as a war of religious beliefs. Russia has so many economic ties to Europe that it would be self-defeating to push the envelope. That being said Putin has demonstrated little restraint to date.”

Earlier this year, Parks raised cash levels in his investment models, as the situation in Ukraine heated up. He has taken a more conservative in general, due to increased uncertainty around the world.

Brian A. Schreiner, president of Schreiner Capital Management in Exton, Pa., believes the Middle East tensions, especially in Syria and Israel, pose the biggest risks because of the U.S.’s direct involvement in those areas.

“If those hot spots erupt or spread into other regions, asset markets around the world would likely experience a heavy shock,” Schreiner said.

“We are watching geopolitical risk more closely than ever,” said Jeremy S. Office, principal of Maclendon Wealth Management in Delray Beach, Fla. “The radicalism and excessive use of beheadings as propaganda to influence the western world has not gone unnoticed. If it’s a war that they [ISIS] want, it’s a war that they will probably get, which could take this terrorist group to the forefront as U.S. and other Western countries join the fight.

“This could potentially disrupt the oil rich region and cause crude to spike where if it remains elevated for a significant amount of time could cause further drag on world economies.”

Office said he has reviewed portfolio positions to make sure his clients aren’t exposed to those areas or any that could be affected by spillover.

“If the Sunni/Shia wars in the Middle East result in a closure of the Strait of Hormuz, then around 17 percent of global energy production would be lost and prices would rise sharply, and the global economic recovery would be at risk,” Elliott said.

“Discussions of resulting implications for investment policy and asset allocation are returning to macro issues from a focus on individual security selection prevalent during the past two quarters,” Helme said.

Jeffrey Apps, vice president of private client services at SRS Capital Advisors in Avon, Colo., has also limited client exposure to international markets because of geopolitical risks. He is also looking at some additional alternatives, including commodities.

“However, what concerns me more so is the complacency factor and the lower levels of volatility.”

Some advisors are taking more of a long-term, buy-and-hold approach, and aren’t making changes to clients’ portfolios in response to the global conflicts, while others say that's a mistake.

“Investors who are taking a passive, buy-and-hope approach in today’s markets are going to be the ones holding the bag when markets do experience a shock,” Schreiner said. “We were fortunate that stocks recovered after the tech bubble and the financial crisis. I’m not so sure stocks will respond the same way after the next crisis. The economy may not be resilient enough after all the tinkering by policy makers.”