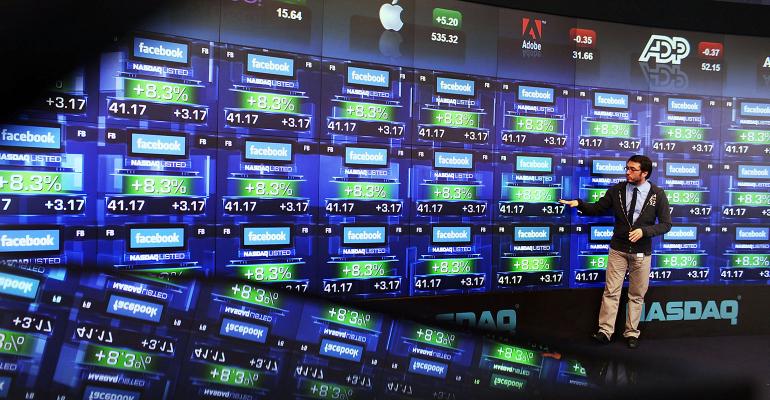 Approximately 52 percent of active fund managers are beating their respective benchmarks this year, the highest relative performance since nearly 55 percent eight years ago.

NEW YORK, Sept 26 (Reuters) - An overweight position in technology stocks like Facebook Inc and Google-parent Alphabet Inc is helping more active fund managers beat their benchmarks than at any point since 2009.

The performance comes as the managers battle passive index funds and exchange traded funds that have grown popular with investors.

Approximately 52 percent of active fund managers are beating their respective benchmarks this year, the highest relative performance since nearly 55 percent eight years ago, according to Lipper data. Last year, only 26 percent of fund managers were able to beat their benchmarks, the worst performance for the industry in more than a decade.

This year's outperformance is powered largely by growth funds, with the average large-cap growth fund beating the 11.7 percent gain in the benchmark S&P 500 for the year to date by 3 percentage points. Among the most common overweight positions held by mutual fund managers include Facebook, Google, PayPal Holdings Inc and Visa Inc, all of which are up by 20 percent or more this year, according to Goldman Sachs.

The jump in technology stocks is also helping put the average long/short equity hedge fund on pace for the best performance since 2009, with more funds concentrating their assets in companies such as Ebay Inc, whose shares are up 28 percent for the year to date.

"Funds continue to rely on just a few stocks to drive performance," Goldman Sachs noted, with the average fund holding nearly 70 percent of its assets in its 10 largest positions, a level of concentration near record highs reached in early 2016.

While mutual fund managers are putting up their best performance numbers in nearly a decade, it may not be enough to stop the flow of assets to passive index funds or exchange traded funds, said Todd Rosenbluth, director of fund research at New York-based CFRA. Financial advisors are increasingly looking at annual fees as much as performance numbers, making it more difficult for higher-cost active fund managers to draw assets, he said.

In July alone, investors put $10.8 billion into U.S. passive equity funds, up from $9.3 billion the month before, and pulled $19.6 billion out of funds run by traditional stockpickers, according to Morningstar data.

"Some of the money is leaving regardless of performance and is more tied to lower fees and shifting business models" among financial advisors, Rosenbluth said. "An advisor who has shifted away from active management to lower-cost passive funds is unlikely to come back due to 9 months of performance success." (Reporting by David Randall; Editing by Jennifer Ablan and; Andrew Hay)