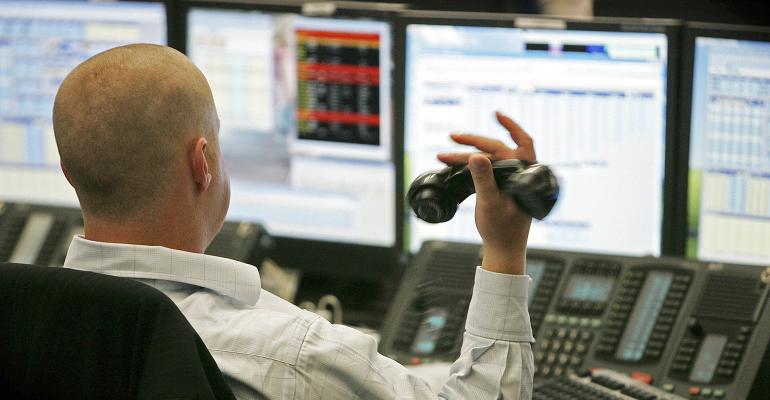 (Bloomberg) -- Looking for a reason to buy equities 7 1/2 years into a bull market? Consider a study that examines an imbalance in stock and bond prices that stretches back half a century.

The author, Leuthold Group, started with the premise that shares should gain more than Treasuries over time -- and the observation that the relationship was annihilated by the financial crisis. The Minneapolis-based fund firm wanted to see if the S&P 500 Index’s rally in the last seven years has been enough to restore balance.

In short, it hasn’t. While U.S. stocks have beaten fixed income by a bigger-than-normal margin since 2009, over any interval longer than a few years, gains in shares are still stuck near historical lows relative to bonds. Leuthold says the unusually strong performance of Treasuries versus stocks over the last few decades has generally been a bullish signal for equities and is one of the reasons it’s underweight bonds in its tactical funds.

“A basic assumption made by investors is that, over the longer-term, ‘riskier’ investments such as stocks should provide reasonably higher returns than ‘safer’ investments such as long-term government bonds,” Kristen Hendrickson, a portfolio manager with Leuthold, wrote in a note earlier this month. “While long-term differential readings are certainly no longer close to the extremes seen in 2009, readings remain fairly low, indicating that further differential mean reversion could be in store.”

The S&P 500 has returned 6.6 percent in 2016, compared with a 4.1 percent gain in the Bloomberg Barclays US Treasury Index. While stocks have beaten Treasuries by about 13 percentage points on an annualized basis since the bull market began in equities in 2009, more double the usual rate, Leuthold found the edge dissolves when viewed from a wider lens -- 10 years back, or 20, or even 50.

Take 20-year returns, for instance. The S&P 500 has advanced at an annualized rate of 7.9 percent in the past two decades, compared with 6.2 percent for 10-year Treasuries. The spread of 1.7 percentage points is smaller than it has been about 85 percent of the time since 1926.

Such low readings have portended outsize gains in equities. The S&P 500 beat Treasuries by a median 11.7 percentage points in the ensuing three years when the return gap over the prior two decades was in the lowest 30th percentile of readings, data compiled by Leuthold show. That’s more than double the extra gains seen in other periods when the stock-bond performance spread was wider.

With equity prices near record highs, Treasury yields stuck around all-time lows, and the Federal Reserve considering higher rates, choosing between stocks and bonds has rarely been harder. Making it worse has been the recent tendency of the two markets to move in the same direction on the same day, something that happens when expectations about Fed rate decisions are dominating psychology.

“The funny thing about the way people perceive and process risk is it’s a time-dependent thing,” said Sean O’Hara, president of Pacer ETFs Distributors in Paoli, Pennsylvania, where the firm oversees $700 million. “Investors who have been traditionally yield-oriented are being forced to make a decision. ‘Do I own bonds, which I think are safe, or do I take that money and buy high-quality stocks and take a little more risk of doing so?’ The trade-off is a challenge for people to get their arms around.”

To Mislav Matejka, an equity strategist at JPMorgan Chase & Co., the danger for stocks lies in their rising correlation with bonds. A gauge that measures to what extent the two assets moved in locksteps in the past 24 months has exceeded 40 percent, the highest level since the bull market began in 2009, JPMorgan data showed.

“Renewed bond market volatility could be a problem for stocks,” Matejka wrote in a note to clients Monday. “The massive liquidity injection by G-4 central banks over the last seven years provided a strong boost to equities. The liquidity trade could start changing if investors begin questioning the sustainability of the QE trade.”

Bonds and stocks suffered a concerted selloff on Sept. 9, when both markets plunged in unison amid Fed hawkishness. The S&P 500 tumbled 2.5 percent in its biggest drop since the Brexit vote while Treasuries slumped, sending the yield on the 10-year note to the highest since June, after Boston Fed President Eric Rosengren warned against waiting too long to raise interest rates.

In Leuthold’s study, stocks looked worst when the comparison was extended to 35 years, a stretch when the fixed income market was booming as the Fed cut its benchmark interest rates from 20 percent in 1981 to almost zero. During that period, stocks suffered five bear market declines of at least 20 percent, including the last two that each erased half of equity values. Based on 35-year returns, the S&P 500’s gap over Treasuries now sits at the bottom 12th percentile of all readings.

“People are scared. They’re less interested in returns and more interested in capital preservation,” O’Hara said. “I’d be more likely to overweight stocks because I don’t think there is much return opportunity in fixed income today. But I’ll be cautious about where we are in the cycle and we’ll be leaning toward equity strategies that have some protection attached to them.”