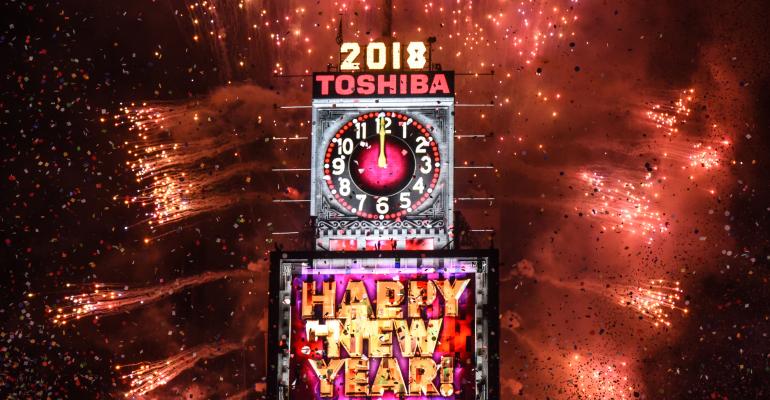 2017 Markets Helped by What Didn't Happen

(Bloomberg View) --Many of the assessments of the 2017 financial markets understandably focused on the impressively favorable outcomes delivered by stocks and other risk assets. Yet it is also worth considering what didn't happen -- in particular, nine events, which, by not taking place, contributed to make the last 12 months exceptional for many investors, big and small.

Superlatives have been and should be used to describe stock-market performance in 2017. Rewarding overall returns, including gains of 25 percent for the Dow Jones Industrial Average and 19 percent for the S&P 500, came wrapped in extremely low volatility. The VIX, the most widely followed measure of market volatility, registered nine of its 10 lowest levels last year.

The series of record highs during the year -- 71 for the Dow alone -- was accompanied by very few episodes of market retracement. And the rare times these occurred, they were comfortably limited in size, duration and scope.

Overall, the Dow rose nine months in a row, the longest streak since 1959; the S&P delivered positive returns every month of the year. The powerful performance of stocks was not limited to the U.S. A few international markets did better, including an almost 40 percent return on Hong Kong stocks, and the MSCI ACWI (excluding the U.S.) index returned a solid 24 percent.

Adding to the good news for investors, the cost of risk mitigation associated with the traditional 60/40 stock/bond investment portfolio was de minimus, and even non-existent with a diversified fixed-income approach. In another unusual twist, both stocks and bonds delivered positive returns.

The yield on the 10-year U.S. government bonds ended the year at 2.41 percent, or four basis points lower than at the start of the year. Given the surge in global stocks, that is certainly not the performance that would be expected for the “risk-free asset” based on history. Moreover, the U.S. government bond market traded in a relatively narrow range all year, with the 10-year spending around 80 percent of the time in a band of just 30 basis points.

Yes, there is a long and impressive list of things that went extremely well for investors in 2017, as markets responded favorably to the trifecta of:

Yet as long and consequential as the list of 2017 superlatives is, it is also worth looking at what didn’t happen -- especially if the goal is to look ahead to 2018. In this regard, nine issues are worth mentioning:

The failure of these nine threats to materialize contributed to 2017’s strong annual performance for risk assets. Together, they turbocharged a rally powered by improving economic prospects, strong corporate profitability and ample liquidity. After closing the books on a great year, investors now need to assess the durability of this unusual combination of things that did and did not happen.

Happy New Year and best wishes for a happy, healthy and successful 2018.