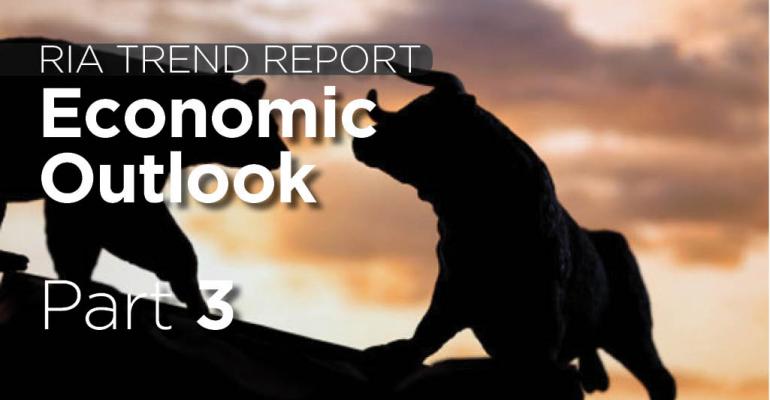 In prior years we observed that advisors were increasingly willing to utilize alternatives in client portfolios. However, while alternatives remain a popular choice for advisors, RIAs may be slightly less enthusiastic about this asset class in 2015. Specifically, the percentage of advisors considering alternatives for the coming year dropped to 21% from 23% last year and 26% in 2013. This finding is consistent with our observation from our chapter devoted to alternative investments. Municipal debt is the second most popular response and also shows an increase over last year. And while we also observe greater interest in commodities and U.S. high yield debt, the most notable year-over-year change can be seen in the percentage of advisors considering or evaluating developed European corporate debt for their client portfolios, with 13% of respondents compared to only 3% each of the last two years. In total, it appears that advisors are more broadly considering new asset classes for client portfolios this year.

As expected, when advisors have positive sentiment towards an asset class they are more likely to be bullish about the class. Alternatives and municipal debt each register slightly bullish to bullish responses from over one-third of respondents. Foreign government debt generated the greatest number of negative responses, with nearly half of advisors responding as bearish or slightly bearish. This likely reflects the extremely low yields found across the international sovereign debt asset class.

Next Part 4 of 6: Expected Growth Rate of Advisory Business Over the Next Year