/sites/all/themes/penton_subtheme_wealthmanagement/images/logos/footer.png
Recent
Recent
10 Must Reads for the CRE Industry Today (July 30, 2021)
Jul 29, 2021
Multifamily Developers Double Down on Southern, Secondary Markets
Jul 29, 2021
How Advisors Can Keep More of Their Clients’ Kids as Clients
Jul 29, 2021
When a Press Release Is Not Enough
Jul 29, 2021
Featured
Poll: 15 Classic Books on Investing and the Markets
Apr 03, 2020
Fifteen Must-Listen Business Podcasts for Advisors
Aug 14, 2020
25 U.S. Markets Adding the Most Multifamily Units This Year
Feb 03, 2021
The Top Colleges for Financial Planning
Oct 03, 2019
RIA Trend Report - Economic Outlook
brought to you by 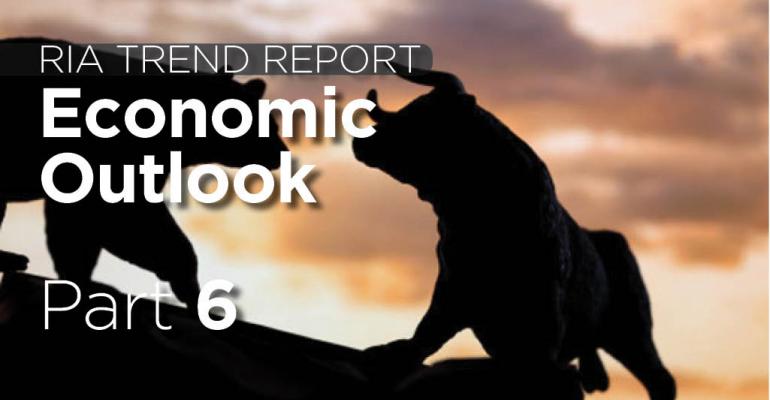 In contrast to naming one or more issues from a predetermined list that were considered to be the biggest threats to their practice, advisors addressed each and every threat, ranking them on a scale of one (least) to ten (most). Not surprisingly, the top four threats remained the same as last year: government overregulation, finding new clients, increased compliance demands, and volatile/flat markets. However, within those, it is interesting to note that government overregulation took the top spot from finding new clients. Other responses that moved up in the ranking this year include downward fee pressure and competition from online service offerings. Clearly these two may be related and we noted some similar findings in our chapter on Robo Advisors. Factors that appear to of very little worry to advisors include competition from CPAs, communication with employees, and lack of exit strategy/succession plan, also consistent with our observations from the 2014 survey. Nearly all of the other factors are generally tightly bunched in the middle of the distribution of responses and are generally consistent with last year.