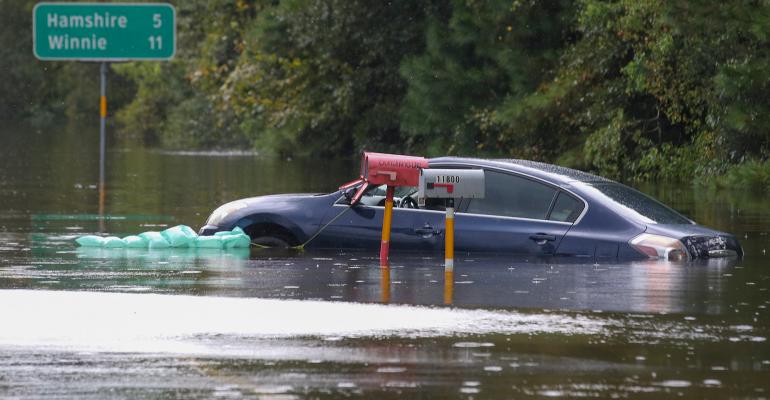 The Truth About Flood Risk Can Worsen American Inequality

Government-produced maps showing 8.7 million homes and properties at significant flood risk may have underestimated the amount of real estate at risk by 67%.

(Bloomberg) -- First Street Foundation, a nonprofit agency, is making accurate climate change-adjusted flood scores available for every property in the U.S. today. There are government-produced maps showing 8.7 million homes and properties at significant flood risk—and it turns out those may have underestimated the amount of real estate at risk by 67%. Or, in other words, an additional 6 million properties face a significant risk of flood.

Before these individual property scores were available, there was no easy way for your average homeowner or buyer to understand the flood risk associated with specific properties. That’s particularly problematic because climate change is causing flood risk to increase; there are more extreme rain events and coastal flooding than there used to be.

In theory, accurate signals about real flood risk will help correct some of the irrational and expensive behaviors we’ve seen— like continued real-estate development in high-risk shore communities. It might also help more people understand what’s at stake if we as a society don’t curb our greenhouse gas emissions.

But transparency also has its downsides.

Rachel Cleetus, policy director for the climate and energy program at the Union of Concerned Scientists, conducted research on risk of coastal property flood in 2018, complete with data on how the risk affected each individual house. She and her colleagues considered publishing their findings but decided against it. Instead, they published the risk information by zip code. Exposing higher flood risk would likely translate to lower property values, and Cleetus worried about singling out unsuspecting home owners.

Some might imagine shoreline communities as the province of second homes for rich people, but in places such as Texas and Louisiana—coasts where risk is already high and projected to get much worse—there are often low- and moderate-income neighborhoods and communities of color. These are the people least able to afford private insurance and most likely to face financial run if their mortgages go underwater.

Cleetus points out that individuals didn’t create the problem of climate change and therefore shouldn’t have to bear its financial consequences individually.  The real solutions, she says, must be collective actions such as restoring wetlands to blunt storm surges or reducing total greenhouse gas emissions.

It’s unfair to pin the problem on a few without public policies to moderate the fallout.“The market is a brutal and sometimes inequitable tool,” she says.

Jesse Keenan, a real-estate professor at Tulane University, sees another problem. Banks and investors are already beginning to abandon communities with a high-risk of flooding, a process he labels “blue-lining.” He stresses the term specifically because he believes it is linked to “red-lining,” the process by which banks exclude Black and other minority communities from home loans.

Because historically red-lined communities offered no tax base, they often didn’t benefit from top-notch drainage and sewer systems or other public works projects. That dynamic continues to haunt neglected neighborhoods today in the form of increased vulnerability to flooding. “Red-lining lives with us today in the form of degraded infrastructure in marginalized communities,” Keenan explains.

Poor infrastructure begets more flooding, which begets worse flood scores, which begets less investment. So a vicious circle of disinvestment drives a community to the brink. That’s why Keenan thinks the new flood maps could have a profound but not entirely salutary effect. “Banks are already using climate data to make investment decisions and this information could accelerate further marginalization of moderate and low-income communities,” he warns. “And I think we have to stand back and understand that the market made be maladapted to deal with this.”

To contact the author of this story:
Leslie Kaufman in New York at [email protected]

To contact the editor responsible for this story:
Emily Biuso at [email protected]