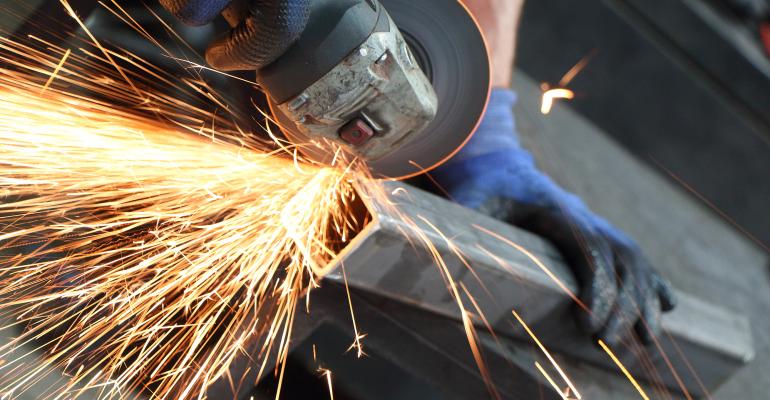 Even as demand rises, Western producers aren’t keen on expanding.

(Bloomberg) -- There’s rarely been a better time to be in the steel business.

Prices have boomed worldwide this year, smashing record after record. Roaring industrial demand is propelling those rallies, with plants straining to boost supply after lying dormant during the pandemic. On top of that, powerhouses China and Russia are trying to limit exports to help other industries at home.

“If you’d asked me six months ago what was my most positive vision for the first half of 2021, I don’t think I would’ve even come close to the reality,” Carlo Beltrame, who manages Romania and France for AFV Beltrame, said in a phone interview. The closely-held company plans to build a 250 million-euro ($295 million) mill in Romania with the capacity to produce about 600,000 tons a year.

That optimism is a far cry from the past decade, when Western makers closed plants and shed workers as low demand had their mills operating below capacity. Last year alone, 72 blast furnaces were idled, according to UBS Group AG.

This year, U.S. President Joe Biden wants to spend on infrastructure, and the European Union wants to spend on reaching net-zero emissions. Manufacturers such as Nucor Corp., U.S. Steel Corp. and SSAB AB are among those set to become profit machines. ArcelorMittal SA, the world’s biggest outside of China, will earn more than McDonald’s Corp. or PepsiCo Inc., according to analysts’ estimates.

Few expect these good times to last through 2022. Keybanc Capital Markets and Bank of America Corp. believe the backlogs driving a surge in U.S. steel prices will start clearing this year. But some analysts predict the current rally may herald better times in the long run, with prices eventually settling at more sustainable levels than before.

“The steel industries outside of China will potentially enter a renaissance period,” said Tom Price, head of commodities strategy at Liberum Capital Ltd. in London. “We could see a turnaround story there because those economies just need their steel.”

Developments in China are key, given it produces more than half of the world’s steel, mostly with coal-fired blast furnaces. The government has signaled it no longer wants to bear the huge environmental burden that entails, so it’s seeking to curb production through measures such as firming up guidance on capacity swaps and removing export tax rebates.

Achieving the government’s goal will be a challenge given China’s strong output at the start of the year, said Lu Ting, a senior analyst at researcher Shanghai Metals Market. Meanwhile, the China Iron & Steel Association’s first draft of its roadmap toward carbon neutrality will be closely watched by the market for any clues on the trajectory of future supply from the nation.

Also providing cause for optimism is the renewed focus on stimulus and infrastructure in the U.S. and Europe. Biden is determined to make new roads, rail and housing the hallmark of his tenure, while the EU is emphasizing clean energy as part of the coronavirus recovery package and Green Deal.

That requires steel, and lots of it. Biden’s proposed infrastructure plan would increase annual demand by about 5 million tons for the first five years, London-based consultancy CRU Group estimated. A bipartisan package would spend $579 billion if approved.

Yet only 4.6 million annual tons of planned capacity are expected to come online in the U.S. by the end of 2022, Bloomberg Intelligence analyst Andrew Cosgrove said.

And even as demand rises, Western producers aren’t keen on expanding. U.S. Steel Chief Executive Officer David Burritt told shareholders in April the company had no plans to restart two blast furnaces that were shut down last year.

Cleveland-Cliffs Inc., the second-largest U.S. steelmaker, is set to tear down its Ashland mill in Kentucky, as well as a blast furnace at Indiana Harbor West. CEO Lourenco Goncalves said in April those will never return to production as his focus is paying down debt.

European producers are almost as skittish about investing in new capacity after spending the past decade painfully cutting down. ArcelorMittal said during earnings calls that its priority is shareholder returns.

In part, that’s due to fears that protectionist measures governments implemented to support their ailing steel companies won’t last forever.

But there’s no signs of change on that front, even with sky-high prices. Biden still hasn’t repealed tariffs on foreign steel imposed by former President Donald Trump, while the EU last month opted to extend its safeguard measures for another three years.

If anything, more support is on the way. The EU eventually will impose duties on imported steel as part of its Green Deal, and those will fall most heavily on carbon-intensive producers such as Russia.

Other nations also could fill the gap created by China’s restrictive measures. India is set to boost capacity, with top producer JSW Group saying it will reach its goal of more than doubling capacity to 45 million tons before 2030. Southeast Asia, including Malaysia and Indonesia, plans to add another 60 million tons by the end of this decade, according to consultant Wood Mackenzie.

AFV Beltrame could start building its rebar and wire rod factory in Romania as early as this year. The plant will generate the lowest emissions in a steel production unit in the world, the company says.

“I’m trusting that this super cycle will last for some more months,” Carlo Beltrame said. “We need bricks, we need cement, we need steel. And we as entrepreneurs have to take the challenge of transforming this industry.”

--With assistance from Annie Lee.