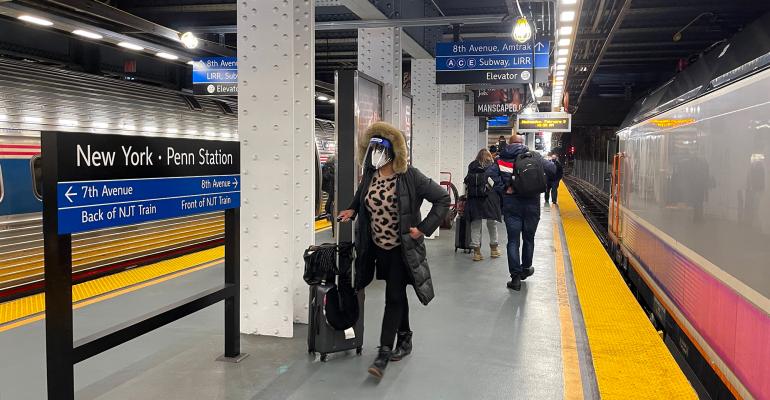 The state will sell development rights to private developers and collect payments-in-lieu-of-taxes, known as PILOTs, on newly constructed and environmentally friendly office and residential buildings.

(Bloomberg)—A funding deal has been reached for the redevelopment of New York City’s Penn Station, the latest step in the multibillion-dollar plan to transform the rail station that sits below Madison Square Garden.

New York Governor Kathy Hochul and New York City Mayor Eric Adams announced the financial framework between the city and state that will help fund the reconstruction and potential expansion of Penn Station in a statement Monday. Under the agreement, the city and state have committed to establishing a shared city-state governance entity to oversee the improvements.

The state will sell development rights to private developers and collect payments-in-lieu-of-taxes, known as PILOTs, on newly constructed, modern, and environmentally friendly office and residential buildings. PILOTs can be used to pay for up to 100% of improvements to streets, sidewalks, public spaces and other elements of the public realm, 50% of improvements to transit infrastructure, including underground concourses and subway entrances and 12.5% of the cost of the reconstruction and potential expansion of Penn Station.

“The current Penn Station is unsightly, inefficient, and impossible to navigate, and New York commuters deserve better,” Hochul said in a statement. “This agreement brings us one step closer to a beautiful, modern station worthy of New York with vibrant open space, lively streetscapes, and better, more seamless connections to local transit.”

To make sure New York City maintains its tax revenue stream, the city will collect amounts equal to current taxes on each development site with a 3% increase each year. All buildings will return to the city’s tax rolls after the agreed contributions to project costs are met, or after a period of 80 years, at the latest. The city and state have also agreed to cap any property tax abatements.

Any remaining costs would be funded through a combination of sources from the federal government, New Jersey, New York state, Amtrak and other public funding sources.

Hochul said in June the state is accepting bids from design firms and architects for the renovations. In November, Hochul outlined a plan costing $6 billion to $7 billion that would redevelop Penn Station and its surrounding neighborhood. It was less ambitious than that of her predecessor, Andrew Cuomo, but she said it would enable renovation at the same time as the construction of the Gateway tunnel under the Hudson River. Prior to the pandemic, the existing Penn Station was the Western Hemisphere’s busiest transit hub, serving 600,000 passengers a day.

“This partnership underscores the commitment by leadership at the city and state level to work together and ‘Get Stuff Done’ for New Yorkers,” Adams said in a statement. “A state-of-the-art transportation system is at the heart of our ability to have a prosperous life and a prosperous city, and the key to an equitable recovery.”