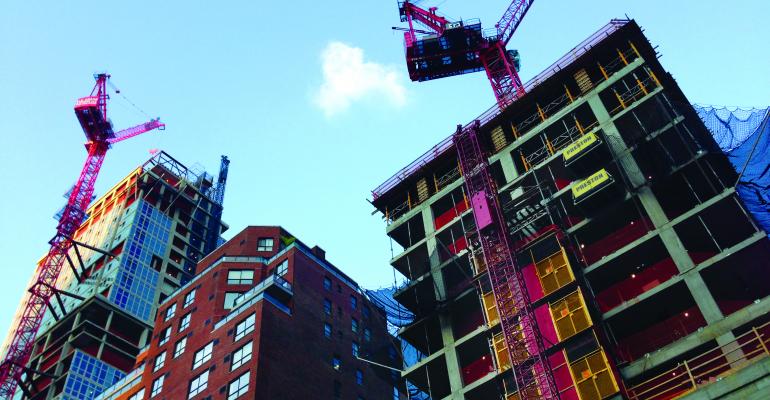 NYC Construction Plugs Away Even with City Shutting Down

With offices and restaurants closed, construction projects in the city are still going ahead.

On Wednesday morning, the pounding of jackhammers and the blaring beeps of trucks in reverse broke the eerie quiet on the waterfront in Brooklyn’s Williamsburg, where work continues at Domino Park. It was the same in Queens and Manhattan, where new offices and residential buildings are under construction.

At the Waldorf Astoria, workers were busy fixing the facade of the iconic Park Avenue hotel, which is being turned into high-end condos. Near the Brooklyn Bridge, roughly 250 workers are putting up a luxury condo building at 130 William St. The developer, Lightstone, is expecting to receive a shipment of cabinets, vanities and marble slabs from Italy, which he ordered before the virus shut down the country.

“You’re not confined to an office,” said Scott J. Avram, the Lightsone executive who oversees the project. “They’re already wearing gloves and masks and hats and glasses and they’re already not working in close proximity to one another.”

Lightstone said it is monitoring the situation and will adhere to guidelines set by the state.

Boston has suspended all construction projects in the city, while San Francisco’s new shelter-in-place order has left cranes and construction sites deserted.

In New York, it’s largely business as usual, though some workers have been calling out because they’re worried about the virus, according to Elizabeth Velez, chair of the New York Building Congress, an industry trade group.

“The work is ongoing, but it’s getting quieter on construction sites as we grapple with the issue of ensuring we have enough staff to be able to work and mitigate against the risk,” Velez said. “So far, there’s no plan to delay.”

Some New Yorkers are just now realizing how loud construction can be, especially since many are working from home. City Councilman Keith Powers, who represents part of Manhattan, said his office has been getting calls from constituents about all the noise.

With many commuters avoiding Manhattan, the crowd at Grand Central Terminal was eerily sparse Tuesday afternoon, while major construction projects nearby continued. At One Vanderbilt, a massive office tower next to the train station, clanking metal and drills resounded through streets that were quiet save for the occasional car horn or siren.

In the Hudson Yards area, about 500 crew members were working on the Jacob K. Javits Convention Center. That could change soon, with local officials considering stricter rules that would require New Yorkers to stay home. Mayor Bill de Blasio and Gov. Andrew Cuomo are squabbling over the potential for a shelter-in-place order for New York.

If construction projects in New York City are halted, economic repercussions could be devastating. There are currently more than 6,800 active construction sites across the city, employing tens of thousands of workers.

Shutting down the projects could bankrupt construction firms and lead to massive layoffs, issues that other industries are contending with as the virus roils the U.S. economy.

“The economic impact of what happens to projects that aren’t moving is devastating” said Carlo Scissura, president and chief executive officer of the New York Building Congress. “There are so many things that are critical to the lifeblood of the residents of New York. You can’t just say shut down everything.”

To contact the editors responsible for this story: Craig Giammona at [email protected]
Christine Maurus