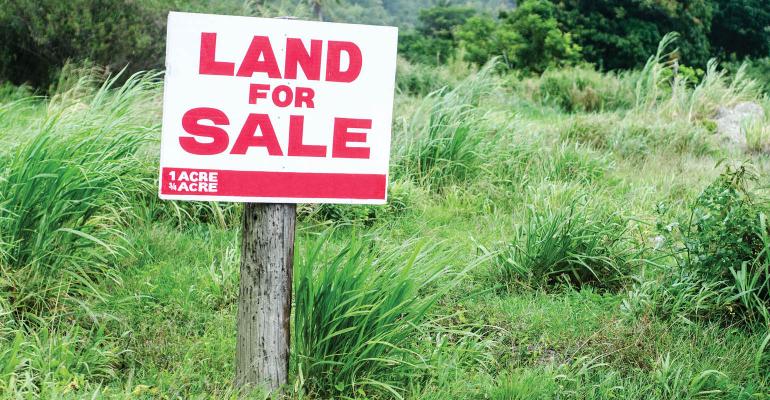 Developers are remaining careful on land acquisitions this time around.

Land sales can be a fickle business. Prime development sites often disappear quickly, while other parcels can languish on the market for years waiting for the right buyer and use. Land sales can also be a good barometer to show what’s ahead for development pipelines and growth opportunities within markets.

Annual transaction volume on land deals is still falling well short of the pre-recession peak that reached $31.2 billion in 2007. However, sales have been fairly steady over the past five years, with annual totals ranging between $19.3 billion and $25.0 billion, according to research firm Real Capital Analytics (RCA). Buyers have taken the foot off the gas a bit in 2019, with year-to-date sales at the end of the third quarter totaling $14.3 billion, which is down 16 percent compared to the same period in 2018, according to RCA.

Overall, developers have been much more disciplined compared to past cycles when they were more aggressively grabbing land that was well ahead of growth. “We’re not seeing that now. They’re slowly marching with growth and not racing in front of it,” saysAshley Bloom, national land & development services product council chair for brokerage firm SVN in Sarasota, Fla.

“Land sales volume is difficult to track from a national perspective, but is generally flat,” notes David Adams, director and co-head of JLL Capital Markets, Americas land group, in Houston. Land sales are very location- and use-specific and individual markets have their own unique drivers. Markets that have strong employment growth and are not over supplied in various asset classes are seeing a tremendous amount of development, which closely correlates to land sales. Likewise, those growth markets are seeing a deeper buyer pool for good development sites, he adds.

According to RCA, the most active markets for development site transactions based on year-to-date sales volume through third quarter include New York City, Los Angeles, Dallas, Phoenix and San Jose, among others.

Prices have remained fairly stable over the past 12 to 18 months, agrees Bloom. In the past cycle, higher land prices would result in higher rents or home costs. Now there is a lot more discipline in underwriting. Developers recognize that they can’t just tack on a higher rent or purchase price to account for a higher land cost, notes Bloom. If the land price doesn’t work with the total project cost, developers are not going to do the deal, he says.

Land sales are tracking with development activity. So, it is no surprise that land zoned for industrial and multifamily uses makes up a more active segment of the market.

“Buyer interest has narrowed since the recession,” says Abbe Hohmann, CCIM, president of Site Strategies Advisory LLC in Indianapolis. Part of that is due to the fact that there was such a run-up in development going into the recession and developers have been slower to pick up the pace, particularly in retail and single-family home building, she notes. That being said, there has been explosive growth in multifamily in the past several years that has fueled demand for good building sites. Indianapolis has also seen strong demand for industrial land, given its central location and presence of a major FedEx hub, she adds.

“We have always been a sought-after market for industrial warehouse/logistics type projects, and that has only increased coming out of the recession with e-commerce and all of the trends impacting industrial,” says Hohmann. That appetite for large-scale industrial sites remains unabated. Single-family residential construction has also recovered in Central Indiana. For example, Hohmann has a 120-acre land parcel in Westfield, Ind.—about 30 miles north of Indianapolis—that is currently under contract with a housing developer that is planning to build an age-restricted residential community for seniors.

There are some signs that national homebuilders are starting to slow down a little bit in the number of lots they are willing to buy in some metros, because they are worried about an economic slowdown, notes Bloom. However, the steady demand for housing and low interest rates continue to provide a good tailwind for residential developers. Generally, land sales are following the population. “Anywhere that retirees and baby boomers are going and where we’re seeing a good flow of people, we’re also seeing land deals,” he says.

For example, Florida land investor and real estate developer BTI Partners acquired 1,400-acres about 20 miles south of downtown Orlando in August for a reported $40 million. The site has been approved for about 5,000 residential units and 2 million sq. ft. of commercial space. BTI Partners is still working on design and planning for the site, but the firm typically sells off lots in master-planned communities to residential homebuilders.

In addition, Houston-based developer Land Texas partnered with CBA Land Capital earlier this fall to acquire 856 acres for a future master-planned community in Cypress, Texas. The site, which is located about 30 miles northwest of Houston, will be able to accommodate about 2,500 single-family homes.

Land sales reflect the bifurcated market that exists in terms of demand for desirable urban infill sites and the lure of lower cost parcels available in outer suburbs. “Developers are continuing to move further from urban cores, but, at the same time, we are witnessing the redevelopment and densification of most of our major markets,” says Adams. So, on the one hand, there is still high demand for good infill sites, while at the same time rising housing values in most infill locations are pushing people further out from the core to where they can afford to live, he says.

Likewise, businesses are keeping a close eye on where their employees and target labor pool is choosing to live—urban or suburban areas—and making their location decisions accordingly. In some cases, that is causing some businesses to move from the suburbs closer to central business districts, whereas in other cases, firms remain firmly rooted in the suburbs.

There has been a lot of focus on millennials and will they or won’t they move out of cities to the suburbs. “This is a key question developers and builders are focused on. There is speculation about both directions, and we will have to see how this starts playing out,” says Adams. “I assume we will see both, just like we are now—higher density housing in infill locations and continued urban sprawl.”

Apartment developers are also staying closer to the core because of financing. “If you can’t prove rents and the rental history of an area, financing is very difficult,” says Bloom. “So that constraint has definitely kept the multifamily developers from reaching further out.”