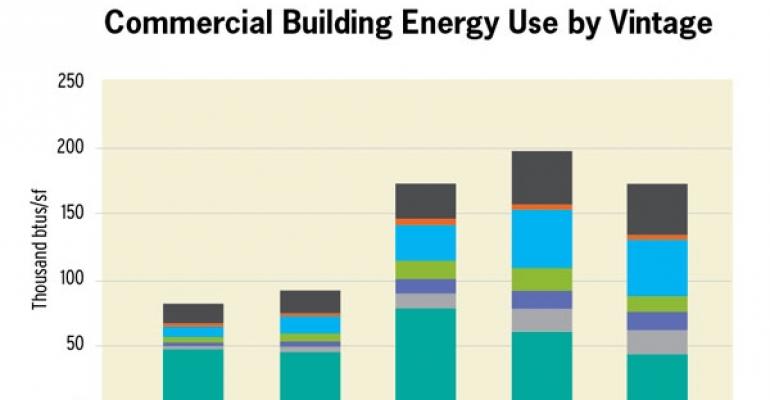 Now there is proof.

A groundbreaking report released earlier this year found that it is unequivocally greener to retrofit an old building than construct a new green building, no matter how many high-tech bells and whistles are in the new construction. “The Greenest Building: Quantifying the Environmental Value of Building Reuse,” was commissioned by Preservation Green Lab, a project of the National Trust for Historic Preservation with support from The Summit Foundation and in partnership with four companies, including Skanska Group.

Elizabeth Heider, chair of the board of directors at the USGBC and senior vice president, green markets, for Skanska, says there has been a great interest over the past 20 years in tearing down buildings and raising new green ones.

“The thought was that in order to build green you had to build new,” she says. But the numbers don’t add up that way.

The numbers add up in favor of retrofits

The report states: It can take between 10 and 80 years for a new energy-efficient building to overcome, through more efficient operations, the negative climate change impacts that come from construction. Environmental savings from re-use are between 4 and 46 percent over new construction when comparing buildings with the same energy performance level.

And it’s a huge marketplace. In any given year, only about 1 percent of the building stock in the U.S. is new. You can see the impact of green retro versus green new in the stats from the U.S. Green Building Council, which saw LEED certification for existing buildings (LEED EB) start to outpace LEED for new construction (LEED NC) in 2011. That trend has continued so far this year with LEED EB logging in 25.3 million more square feet than LEED NC.

In Chicago, Atlanta, Phoenix and Portland, the Greenest Building researchers looked at two actual buildings—one a new construction and one a retrofit—in each of seven categories: commercial office, mixed-use, elementary school, single-family home, multifamily, warehouse-to-office conversion and warehouse-to-multifamily conversion. Within the retrofit category, the researchers also compared so-called base and advanced cases—the base having average energy performance and the advanced being 30 percent more efficient than that.

In each instance, the researchers looked at the environmental impact of the new construction versus that from the retrofit.

Patrice Frey, director of sustainability for the National Trust for Historic Preservation, says some of the most startling numbers came in the category of human health. Across all four cities, in almost all categories, the negative environmental impact of retro green for human health was between 12 and 38 percent less than for new construction.

“It is more clear than ever that there are human health reasons to reuse rather than rebuild,” Frey says.

The report is no surprise to Bob Best, executive vice president at Jones Lang LaSalle. In June two JLL buildings became part of a group of 14 commercial buildings that signed on to the Retrofit Chicago’s Commercial Buildings Initiative. The goal is for each building to reduce energy usage by 25 percent.

Best says the firm will analyze how best to attain that goal at its properties: the Hyatt Center at 71 South Wacker Drive and the NBC Tower at 454 North Columbus Drive. The energy audit and energy analysis is crucial, he notes.

“Too many buildings say ‘We need new windows,’ or ‘We need a new chiller plant,’” Best says. You don’t know what you need until you look. That point was made when JLL did the retrofit at the Empire State Building. JLL knew the building’s chiller plant needed work. Retrofitting the building’s windows was cheaper than a new chiller system and it saved so much energy that a chiller system retrofit was just as effective.

Likewise, Eric Duchon, manager of sustainability strategy at Cushman & Wakefield says companies are continuing to make retrofitting pay back in terms of financial incentives. Cushman & Wakefield is currently undergoing a retrofit project at its New York City headquarters with lighting upgrades. The company is also replacing the air handling units and installing variable frequency drives and doing lighting work at another building in its portfolio.

Each individual project does not net a sizable incentive from the New York State Energy Research and Development Authority, but the agency allows firms to bundle together projects within the company’s portfolio and that package will net them a larger incentive. In C&W’s case, the incentive went from just a few thousand dollars separately to almost $30,000 bundled.

Retros win in paybacks, too

The Greenest Building report does not address the comparative financial payback of new versus retro. However, “The McGraw-Hill Construction Green Outlook 2011: Green Trends Driving Growth” report does.

But, predictably, retros won the contest when it comes to ROIs, showing a 19.2 percent increase in ROI for retros versus 9.9 percent for new buildings.

One of the more surprising findings in the Greenest Building report was that the detrimental environmental effects from a warehouse to multifamily were greater than that in new construction in terms of ecosystem quality and human health impact.

“In retrospect it makes sense,” Heider says. “When you do that, you actually have a lot of impact on the environment because you take so much material out of the building to landfill or recycle.”

The case for demo vs. retro

There are some times when it is better to demolish, Heider admits. Say, an area is a growing community near a transit hub. You have a low-rise property and it’s zoned to accommodate three times as many people.

“If you can increase the density, then it makes sense because you have that access to public transportation and take that transit impact into consideration,” she says.

“If you can increase the density, then it makes sense because you have that access to public transportation and take that transit impact into consideration,” she says.

Cushman & Wakefield’s Duchon used a similar example, pointing to the Bank of America tower at 1 Bryant Park, where several small buildings were demolished to make way for a 55-story, LEED platinum building.

It also can make sense to demo if the existing building is simply not a good fit for the new intended use. “If you have to use more area per worker than you really need for them to do their job, that can be inefficient too,” she says.

Best, of JLL, says it would have to be a pretty extreme case for it to make more sense to demo rather than retro.

“Say a building has no market appeal and it’s also energy inefficient, then you may decide to tear it down,” he says. “But about 75 percent of the commercial building stock is more than 20 years old. What that says to me is that if we want to make buildings more efficient, sure it’s great to focus on new construction but you’re only going to attack a small sliver of the real problem. To get that existing building stock more efficient is the key.”

At the National Trust for Historic Preservation, Frey says her group is working on a follow up report that will identify barriers and disincentives to reuse from policy and marketing standpoints. They are also working with lawmakers in Seattle who are adopting new masonry regulations. Her group hopes to add financial incentives to retrofitting so that building owners can meet the new regulations.

“We want to ask what we can do to help really tip the scale in favor of building reuse,” she says.