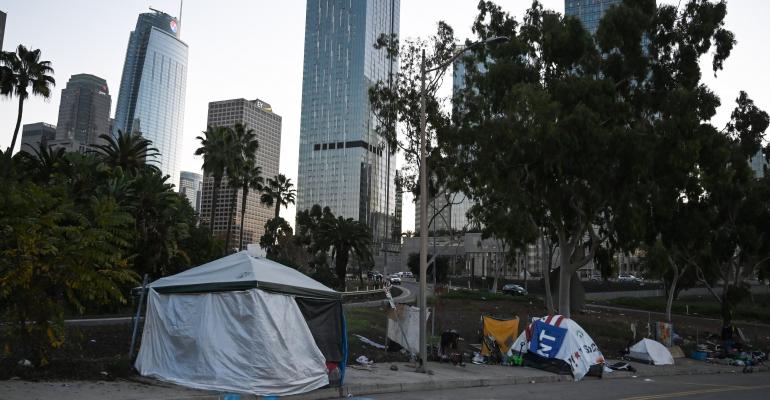 (Bloomberg)—Downtown Los Angeles, which overcame decades of neglect to become one of the city’s hottest neighborhoods, risks backsliding as the homeless population begins to burst out of Skid Row, some real estate developers and business owners warn.

They say sprawling homeless encampments threaten residents, workers, visitors and the homeless themselves with hazardous waste, disease and crime and could reverse 20 years of progress.

The threat may become more acute -- not only in Los Angeles but also in Hollywood, Sacramento, Seattle and elsewhere in the western U.S. -- now that the U.S. Supreme Court has let stand a ruling that cities can’t outlaw such encampments if no other shelter is available, given the Constitution’s ban on cruel and unusual punishments.

“Finally downtown has become a real city, but I’m concerned it’s going to collapse again,” developer Izek Shomof said. “Every one of our properties is affected.”

Shomof, who said his holdings were worth hundreds of millions of dollars, was among the first to buy up vacant office buildings in the city’s former banking district in the 1990s and turn them into lofts for urban pioneers. Today, the downtown area’s homeless population has exploded to about 8,000, mostly concentrated on Skid Row itself -- a 50-square-block industrial wedge between the redeveloped old financial district and the up-and-coming arts district -- but spreading.

Screaming at a Wall

Shomof and other downtown investors are quick to acknowledge that escalating homelessness, driven by the high cost of housing and aggravated by mental illness and drug use, is above all a humanitarian crisis that exposes those living on the streets to violence and illnesses such as flea-borne typhus, which has been on the rise in recent years.

But they also see it as a threat to the local economy as businesses and residents are confronted with public drug sales and needle use, garbage and human waste on the street, trespassers and aggressive panhandlers, all alongside the Pilates studios and juice bars. Sam Rehman, owner of the L.A. Cafe across the street from Shomof’s office, said his manager was ready to quit from the stress of dealing with transients at the 24-hour eatery trying to steal from the tip jar and breaking into the office.

“They go outside and may see a guy screaming at a wall,” said Almeida, who has posted a guard and has his employees escorted back to their cars at night. “You never know what’s around the corner.”

Owners on the block are reluctant to open new establishments, he said, citing a bar just a few blocks east of The Wolves that is now surrounded by tents and is up for sale for the third time in recent years because no one can make it work.

But the homeless encampments are “a significant development,” said Elizabeth Mitchell, an attorney who represents downtown business groups in L.A. and elsewhere in California. “A lot of it is anecdotal, but we’re seeing things turning around. We’re hearing about restaurants that are declining to come downtown.”

Mitchell said the appeals court ruling that the Supreme Court let stand takes an important tool away from local governments by quashing anti-camping laws. “That still doesn’t justify a municipality, like Los Angeles, abdicating its responsibility to maintain public health and safety for all persons, housed and unhoused alike,” she said.

Los Angeles Mayor Eric Garcetti said in a statement that he’d continue to focus on “providing services to save lives, keeping our neighborhoods clean and healthy, opening shelters to help get people indoors more quickly, and building permanent units to keep them under a roof for good.”

There are as many as 59,000 homeless people in Los Angeles City and County, according to a recent estimate by the Los Angeles Homeless Services Authority. That’s less than in New York City, where there were about 79,000 last year, but it’s up from 44,359 in 2015. And 75% of the homeless in Los Angeles live on the street, while in New York the vast majority live in shelters.

East Coast real estate developer Don Peebles recalls a visit to City Hall a few years ago to discuss plans for a $1.6 billion L.A. project in which he’s a partner. On his way out, he remarked on the lush green lawn full of city employees enjoying their lunch break.

“‘Those are homeless, sir,’” Peebles said he was told.

He and his wife drove around downtown that evening. “It was eye-opening,” he said. “You can’t go anywhere in downtown and not experience it. You don’t see anything like Skid Row anywhere else.”

Peebles has teamed up with MacFarlane Partners on one of the biggest downtown projects on the books. Angels Landing, to the west of the city’s historic core, is planned as a mixed-use development of almost two million square feet that will span two towers with hotels, apartments, condominiums, an elementary school, restaurants and retail. The project is his first Los Angeles foray, and he said he wouldn’t let the homeless crisis deter him.

“Downtown Los Angeles’s best days are ahead of it,” Peebles said. “It’s been neglected over time, and there are going to be issues and bumps on the road, but I’m confident in the city’s future.”

The blue state’s homeless surge has drawn the scorn of Donald Trump.

“We can’t let Los Angeles, San Francisco and numerous other cities destroy themselves,” the president told reporters aboard Air Force One on a campaign trip to California in September, adding that homeless people are living on the “best highways, our best streets, our best entrances to buildings” as property owners pay “tremendous taxes.”

Still, downtown is the only place in the city where big residential projects don’t face opposition from well-financed neighborhood groups, like those that will fight almost any substantial proposal for the affluent west side.

Investors are “taking a harder look, but not one client has red-lined downtown Los Angeles,” said Harris, of Institutional Property Advisors, referring to the exclusion of whole neighborhoods from an investor’s portfolio.

Downtown is also the only part of Los Angeles where it’s still possible to develop housing on a large scale, according to Nick Griffin, executive director of the Downtown Center Business Improvement District. The area’s population has increased from 18,000 in 1999 to 80,000 today and is expected to almost double to 150,000 by 2030, he said.

“There’s a massive ongoing investment in residential and office projects, and the influx of residents is continuing,” Griffin said. “We’re still seeing a lot of interest from investors in places like New York who understand the challenges of working in a big city.”

As for Shomof, he said the homeless problem spurred him to diversify three years ago. He put new money in the San Fernando Valley. About a quarter of his portfolio is now outside downtown.