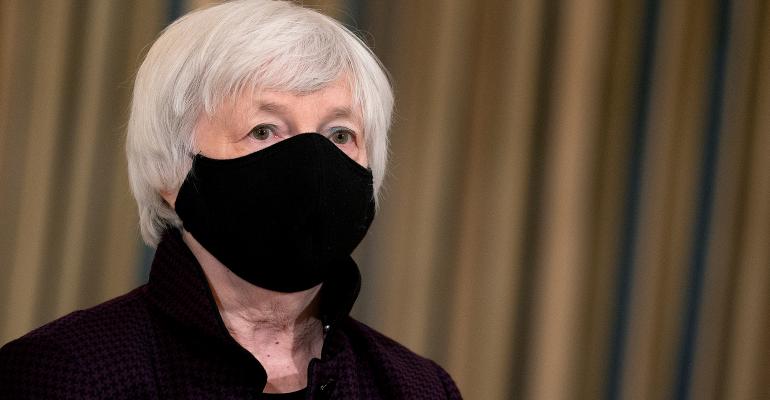 In making the case for a mammoth $1.9 trillion economic relief package, President Joe Biden and his acolytes had maintained that economists across the board agreed that now is the time to go big in the fight against the pandemic.

Well, so much for that. A number of prominent economists and former policy makers -- from Democrat Lawrence Summers to Republican Douglas Holtz-Eakin -- have raised questions in the past week about the size of the package. So too have some economy watchers in the financial markets.

While they don’t disagree that the U.S. needs additional help, they’ve highlighted the potential costs of doing a whole lot more: Economically, there’s the risk of much faster inflation and a stock market bubble. And politically, it could reduce the appetite in Congress for future fiscal action to tackle longer-term priorities such as infrastructure spending and fighting climate change.

Biden doubled down on his pitch for a big package on Friday.

“Some in Congress think we’ve already done enough to deal with the crisis in the country. Others think that things are getting better and we can afford to sit back and either do little or nothing at all,” he told reporters at the White House. “That’s not what I see. I see enormous pain.”

Some 10 million Americans remain without work because of the fallout from the Covid-19 virus. Almost 40% of the unemployed have been jobless for 27 weeks or more, and uncertainty about the virus or rollout of vaccines continues to hold back hiring and activity.

Behind some of the skepticism about the size of the president’s plan is simple arithmetic. The output gap -- the difference between where the economy is and where it should be if there had been no pandemic -- stood at a shortfall of about $665 billion in the fourth quarter of last year, according to Congressional Budget Office figures. The stimulus Biden is seeking is roughly three times that.

Perhaps the most surprising economist to raise questions about the package is Summers, the Harvard University professor who’s been a fixture in Democratic policy-making ranks for decades. He served as Treasury secretary under President Bill Clinton and as a senior economic adviser to Barack Obama.

In appearances on Bloomberg Television and in commentary for the Washington Post, Summers agreed with Biden officials that the risks of doing too little outweighed those of doing too much. And he admitted the economy would have done much better if the Obama administration had pushed for -- and won -- a much larger fiscal package in 2009, instead of the $787 billion program he played a key role in formulating.

But Summers, who is a paid contributor to Bloomberg, argued that the Biden team needs to be cognizant of the risks they are taking with their ambitious plan.

“There is a chance that macroeconomic stimulus on a scale closer to World War II levels than normal recession levels will set off inflationary pressures of a kind we have not seen in a generation,” he wrote for the Post. “I worry that containing an inflationary outbreak without triggering a recession may be even more difficult now than in the past.”

In an interview with CNN’s “State of the Union” television program on Sunday, Treasury Secretary Janet Yellen acknowledged that too rapid inflation was a risk that needed to be considered. But she argued that policy makers have the tools to deal with that should it materialize, and emphasized a greater danger.

While financial markets are increasingly reflecting expectations for a strong rebound -- with stock indexes hitting records -- investors don’t seem overly concerned about a big outbreak of inflation. They see it averaging 2.2% over the next decade, according to trading in the Treasury debt market. While that’s up from a post-pandemic low of just 0.55% last March, it’s still modest by historical standards.

Former CBO Director Holtz-Eakin agreed that inflation is not a particular concern right now. What worries the American Action Forum president is the risk of financial instability, as a flood of cash pushes up the stock market and other asset prices to unsustainable levels -- paving the way for a subsequent crash. That’s what occurred in 2000, with equity prices, and in 2007, with real estate.

Fed Chairman Jerome Powell played down those concerns last month, saying he judged the risks to financial stability to be “moderate.”

But some market professionals are not so sanguine, especially given the virtually unrelenting rise in share prices in recent months.

“When you have reached this level of obvious super-enthusiasm, the bubble has always, without exception, broken in the next few months, not a few years,” Jeremy Grantham, famed value investor and co-founder of Boston-based GMO, said in a Jan. 22 Bloomberg TV interview.

There’s no doubt that Biden’s package would give a big lift to the economy if it’s enacted. “You could get the recipe for the second quarter and third quarter to look astonishingly strong,” said James Knightley, chief international economist at ING Financial Markets.

Peter Hooper, who is global head of economic research for Deutsche Bank AG, forecast that GDP would surge 7% to 8% this year, and unemployment would fall below 4% from 6.3% in January, if the Biden plan is adopted.

But that would come at “the potential costs of some undesired inflation, a significant further increase in U.S. national debt and further political polarization,” the former Fed official wrote in a Feb. 5 report to clients.

While government debt soared to about 100% of GDP at the end of last year, many economists consider it less disquieting than before because interest rates are so low.

Rather than worrying about the extra debt generated by the Biden plan, Summers is concerned that its passage might diminish the political appetite of lawmakers to spend more later to attack such fundamental problems as inadequate public investment.

Asked about that risk on CBS’s “Face the Nation” program on Sunday, Yellen reiterated the administration’s determination to come forward with another package to deal with those longer-term issues.

Biden on Friday signaled he’s prepared to go forward with his relief plan without the backing of Republicans. Congressional Democratic leaders are pursuing a legislative course that forgoes GOP support, known as reconciliation, with committees set to start compiling the bill in the coming week.

Partisan battles over what elements can be included in the reconciliation bill are inevitable, and could leave GOP members all the less likely to consider backing the longer-term economic rebuilding package Biden plans to unveil.

Worries over using up political capital are justified, according to Andy Laperriere, a former congressional staffer who is Washington-based partner for Cornerstone Macro LLC.

--With assistance from Christopher Condon and Julia Fanzeres.