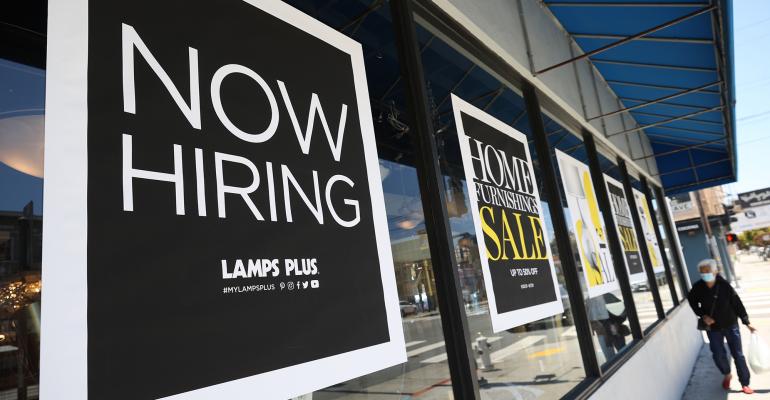 Millions of Americans remain reluctant or unable to take up the unprecedented number of job openings available.

(Bloomberg) -- The U.S. labor market is entering one of its strangest summers ever, with a powerful economic rebound generating record demand for workers just as roadblocks distort employment and wage levels.

While economic growth will clock 10% this quarter and 7% next, according to Bloomberg surveys -- well above pre-pandemic trends -- millions of Americans remain reluctant or unable to take up the unprecedented number of job openings available.

Lingering concerns about Covid-19, highlighted by a worrying surge in the Delta variant, along with continuing childcare challenges have been a bar for some. For others, a temporarily strengthened unemployment-insurance safety net has reduced the need to immediately return to work, or given people the chance to be more discriminating before taking up a role.

Meantime, disruptions to immigration and international travel have curbed typical summer job patterns for workers, especially at inns, restaurants and other facilities at holiday destinations.

“It’s going to be a weird summer. Some of the factors that have been holding back labor supply are starting to roll off and should give us a lift -- but that isn’t going to be too clear until September,” said Gregory Daco, chief U.S. economist at Oxford Economics. “There’s a lot of churn in the labor market right now.”

The June jobs report, due Friday, is forecast to show that the picture is improving, somewhat. The median forecast of economists as of Friday afternoon was for a 695,000 gain in payrolls -- more than in each of the prior two months, which undershot expectations. The jobless rate likely edged down to 5.7%, compared with 3.5% pre-pandemic.

The disappointing readings for job gains in April and May forced economists to reassess factors including early retirement decisions that have been prompted by the pandemic. Goldman Sachs Group Inc. has penciled in the labor force remaining more than 1.2 million workers below the trend level by the end of next year.

The strains have triggered varying responses by employers.

Officials have responded, as well. About half of U.S. states, mainly run by Republicans, are curbing the extra $300 a week in unemployment benefits extended by President Joe Biden’s March Covid-relief act before the supplement runs out in early September.

“It’s likely to take a bit of time for conditions to normalize and it’s not just going to be a straight line back to late 2019. ... Everyone is trying to put one cause behind the fact that the last couple of months have seen sluggish payroll numbers,” but in reality “it’s all the factors combined. They’re all impacted by a series of constraints.”

A Federal Reserve Bank of San Francisco study found that higher weekly payments likely had only a small effect on job applications. Biden’s cabinet has argued that the strengthened jobless benefits have been a positive, keeping people out of poverty amid the continuing crisis.

“There’s little to no disincentive effect” keeping people from work, said Janelle Jones, chief economist at the U.S. Department of Labor. “We are headed in the right direction,” she said. “We just have to keep our foot on the gas.”

Democrats have pointed to the 7.6 million shortfall in payrolls compared with the pre-pandemic peak as reason to keep implementing the March relief package -- rather than repurposing the money.

“The trend lines are positive of getting out of this hole at a historically rapid clip,” said Mike Pyle, chief economic adviser for Vice President Kamala Harris. “We are hopeful the labor market can heal more rapidly. But still, we are under no illusions this will be anything other than a long and bumpy road.”

How quickly the labor market recovers is also key to how Fed policy makers decide to sequence any tapering of their $120 billion a month asset-purchase program.

“This is a period of tremendous change,” said Sarah House, senior economist at Wells Fargo & Co. “Everything is happening at once -- we’re in a harder phase of the labor market recovery.”

--With assistance from Nancy Cook.