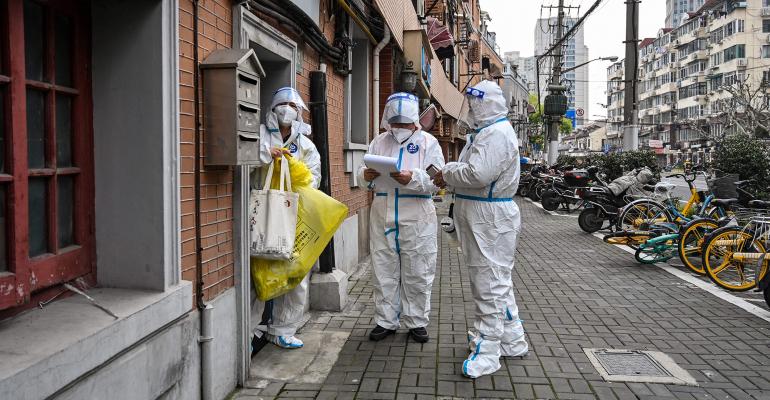 Shanghai Locks Down Half of City to Fight Covid Outbreak

About 62 million people in the country are either in lockdown or facing one imminently, according to Bloomberg News calculations.

(Bloomberg) -- Shanghai will lock down the city in two phases to conduct a mass testing blitz for Covid-19, as authorities scramble to staunch a spiraling outbreak that’s challenging China’s zero-tolerance approach to the virus like never before.

At 5am on Monday, the city of 25 million people locked down areas east of the Huangpu River, which includes its financial district and industrial parks, for four days. The lockdown then shifts to the other half of the city, in the west, for another four days, according to a statement Sunday from the local government.

Residents will be barred from leaving their homes, while public transport and car-hailing services will be suspended. Private cars will not be allowed on the roads unless necessary. Tesla Inc. is extending the production pause at its Shanghai plant to Thursday, people familiar with the matter said. Some financial companies rushed to call staff into offices before the lockdown and told workers to prepare to sleep there.

The sweeping restrictions come as China experiences its worst Covid spread since the virus’s emergence in Wuhan, with more than 6,000 locally-acquired cases reported nationwide on Sunday. The outbreak is testing the country’s virus strategy, which is proving tougher to prosecute amid more contagious variants and is dragging on the world’s second-largest economy as the rest of the globe normalizes.

About 62 million people in the country are either in lockdown or facing one imminently, according to Bloomberg News calculations.

China had recently pivoted to a more targeted approach to dealing with flareups as part of President Xi Jinping’s dual goals of seeking to eliminate the virus while minimizing the economic and social impacts of the Covid Zero strategy. But the rapid rise in cases in Shanghai underscores the limitations of such measures in the face of the highly transmissible omicron strain.

“The failure of targeted lockdown model is a big setback as Shanghai has been the testbed for China to explore alternative model to minimize the social costs,” Oversea-Chinese Banking Corp. analysts Tommy Xie and Herbert Wong wrote in a report. “This may delay China’s plan to ease its dynamic zero Covid policy.”

The Shanghai move comes after authorities locked down the tech hub of Shenzhen in the south earlier this month, the most economically strategic city to come under such restrictions since the pandemic started. More than 3,200 kilometers (2,000 miles) to the north, Jilin, which borders Russia, saw its capital city shuttered on March 11 and days later the entire province sealed off. The region, a hub for auto-making, remains locked down.

Infections in Shanghai, home to the Chinese headquarters of many international companies and the country’s largest port, have climbed in recent days despite repeated and expanded testing. The financial hub reported about 3,500 new infections Sunday, according to a CCTV report, overtaking Jilin as the nation’s biggest Covid hot spot.

The Shanghai Stock Exchange will shift many services online, and extended the time window for listed companies to release statements to 11pm local time. Firms will also be able to apply to postpone the publication of their full-year earnings. The city suspended the auction of 36 land sites. And people wanting to depart Shanghai will need to have a negative Covid results.

Shanghai’s port, the world’s biggest, will maintain operations during the lockdown, the Securities Times reported. Airlines, railways, global passenger and cargo transportation are all operating normally during the new round of nucleic acid testing, Wu Jinglei, director of the Shanghai Heath Commission, said at a press conference on Monday.

McDonald’s shut stores and stopped services in Pudong. Delivery platform Meituan showed Pizza Hut and KFC had stopped delivery in the district, though some small non-chain restaurants were still able to provide services. The Century Link shopping mall said it will suspend operations for four days.

Nongshim Co., an instant noodle maker, will suspend operations at its Shanghai plant between March 28 and April 1, and may extend the halt depending on the lockdown situation. Chipmaker SK Hynix Inc., as well as Hyundai Oilbank Co., have asked employees to work from home.

The lockdowns in Shenzhen and now Shanghai, two of China’s most economically significant cities, show the growing toll -- and challenge -- of maintaining a zero-tolerance approach to the virus amid more transmissible variants. While most countries have started to live alongside Covid, accepting it as endemic, China is maintaining its strategy of closed borders, mandatory quarantines and mass testing, even as it becomes more difficult by the day.

China’s economy faces its worst downward pressure since the spring of 2020, during Covid’s first wave, Nomura Holdings Inc. economists wrote over the weekend. Shanghai contributes 3.8% to the country’s gross domestic product, according to Bloomberg News calculations. And it’s the second-richest city, trailing only Beijing, according to the latest available figures from the National Bureau of Statistics.

For Shanghai, the latest restrictions mark a departure from the city’s previous approach, which was more targeted when it came to curbs and testing. Officials there had resisted a full-blown lockdown to avoid disruption to businesses, only to see the highly infectious omicron variant continue to spread.

As Covid cases started to rise this month, Shanghai reacted by shutting schools and suspending all cross-province bus services. An increasing number of residential towers around the city have been sealed off sporadically over the past few days due to suspected cases.

In its statement released Sunday night, Shanghai’s government said it will ensure basic supplies such as electricity, fuel as well as food during the lockdown periods.

Still, the surprise announcement immediately sparked a rush for groceries as residents sought to stock up on necessities ahead of the first lockdown.

Over the past week, many Shanghai residents have been hoarding supplies due to uncertainty over building lockdowns -- the city’s strategy until now -- and a lack of delivery drivers. Shanghai police detained two men last week on suspicion of spreading rumors that the entire city was headed into a total lockdown.

Officials stressed that citizens’ emergency medical needs will be guaranteed during the lockdown. Medical institutions need to provide a “green channel” for patient reception, and “closed-loop transportation” can be arranged by communities for special cases, said the health commission’s Wu.

A nurse died of asthma Wednesday night after being turned away from Shanghai East Hospital as the emergency department was closed for disinfection under Covid control rules. She subsequently died at another hospital, according to a statement from the medical center in the city’s Pudong district.

There were similar scenes earlier this year when the central city of Xi’an, home to the famed terracotta warriors, was locked down to tame a Covid outbreak. While case levels are nowhere near what is being seen in the West and even in other parts of Asia, China’s hardcore response has become disruptive, spurring President Xi Jinping to urge officials to avoid impact to the economy while continuing to suppress Covid.

Along with Tesla, plants run by Toyota Motor Corp. and Volkswagen AG in Jilin province have been shut down for weeks due to the lockdown there. In Shanghai, financial-market traders have been sleeping at their offices to avoid building lockdowns that would prevent them from the trading floor.