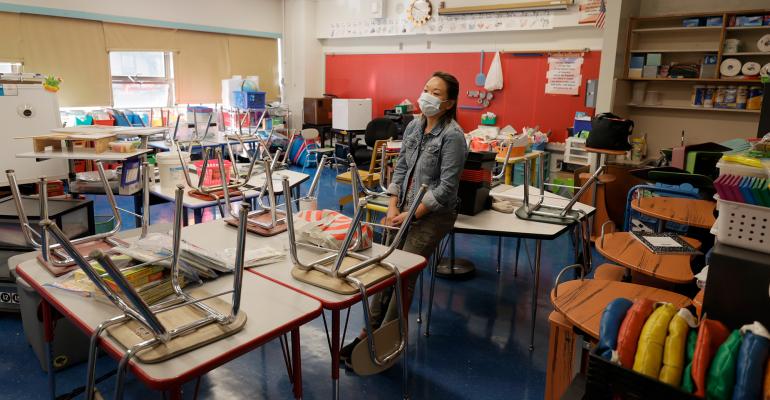 New York City’s public school staff must get at least one dose of the Covid-19 vaccine by Sept. 27.

(Bloomberg) -- For the first time since the beginning of the Covid-19 pandemic, all of New York City’s public school students are expected to return to classes in person on Monday.

It’s a day some families have looked forward to for months, and others have dreaded since Mayor Bill de Blasio eliminated a virtual option for the nation’s largest district. Last year, a majority of New York City students took advantage of a remote option, allowing classrooms to operate at a fraction of capacity.

“Kids coming to school today all across this city are going to experience a gold standard of health and safety measures,” de Blasio said on Monday, standing outside of P.S. 025 Bilingual School in the Bronx with schools chancellor Meisha Ross Porter and dozens of masked kids and teachers.

The full return to in-class instruction will test de Blasio’s insistence that schools can keep infection rates low even with all 1 million children learning in person and the highly contagious delta variant spreading among the unvaccinated. Since the start of the school year, more than 1,400 schools in 35 U.S. states have closed because of Covid-19, according to the Burbio tracker, which follows school shutdowns.

“There is a lot of anxiety because of what is happening around the country,” said Candra McKenzie, an English as a New Language teacher at the City Polytechnic High School of Engineering, Architecture, and Technology in Downtown Brooklyn.

New York City’s public school staff must get at least one dose of the Covid-19 vaccine by Sept. 27, though officials stopped short of requiring vaccines for eligible students, which the Los Angeles Unified School District did last week. About two-thirds of eligible kids -- ages 12 and up -- in the city have their first vaccine dose, according to the mayor. More than half a million students are younger than 12 and are ineligible for the vaccine.

Nearly three-quarters of Department of Education employees have been vaccinated. Employees with an approved religious or health exemption may be assigned to a non-school building job, otherwise if they don’t get vaccinated they will be removed from payroll on Sept. 28 but keep their health insurance through next summer, according to an arbitration agreement signed between the city and education unions.

“Vaccinations are our passport out of this pandemic,” Porter said during the Bronx school welcoming event on Monday.

On Friday, de Blasio added a vaccine requirement for all eligible kids in extracurricular school activities considered high risk, including chorus, dance, band and cheerleading. Vaccines for sports were previously mandated. Throughout the first week, every school that serves children eligible to receive shots will have vaccinations available on-site.

All students and staff must wear masks on buses and on school property, indoors and outdoors, regardless of vaccination status, unless they have a medical exemption. Masks may be removed during lunch and take designated “mask breaks.”

The city said it tapped an independent third-party engineer to inspect its roughly 1,400 school buildings, many of which have been since outfitted with new ventilation systems. The city has also adopted new cleaning systems and most recently, had to repair 234 schools across the city that incurred major damage from Hurricane Ida.

The mayor’s hard-line approach to virtual school has prompted criticism from some parents and city council members, as well as questions about how schools will respond to outbreaks. De Blasio said there will be a process in place to instruct kids in quarantine.

The current protocol requires an entire elementary school class to quarantine for 10 days if there’s a positive case in a classroom. Middle and high school rules are more complicated, and vary depending on students’ vaccination status and symptoms.

“Our kids need to be in school and it’s unbelievable that some kids have not seen the inside of a classroom for a year and a half,” said de Blasio, speaking at a press conference Thursday. “There are massive consequences to that.”

New York City is among the last districts in the country to start classes. Through Sept. 3, about 90% of U.S. K-12 public school students had started, according to the Burbio tracker. Of those that had to close temporarily, delay start dates or switch to virtual instruction due to outbreaks, the majority experienced disruptions in the third and fourth weeks of school.

“I feel safe, but I’m concerned how we are going to support our students when it comes to those that haven’t been in the building for over a year,” said McKenzie, the English as a New Language instructor who taught hybrid last year and hasn’t seen some of her students in-person since the pandemic began.

Some City Council members and parents have criticized the mayor for reducing the frequency of Covid testing and refusing to offer remote options for students.

“Knowing what we know right now, it is very hard to conclude that New York City is doing everything possible to make this a safe and successful school year,” said Mark Treyger, who chairs the council’s education committee.

The virus, and the resulting shift to virtual school, disproportionately harmed the city’s communities of color, and there is widespread consensus on the benefits on in-person learning. De Blasio has staunchly defended his decision to reopen, arguing the risks of being out of school outweigh the health concerns.

“Our schools are safe, and our multilayered approach to protecting the health of students and staff made them some of the safest places to be during this pandemic,” said Nathaniel Styer, deputy press secretary at the New York City Department of Education. “We will work with each family to ensure that their children safely return to school for in-person learning and to restore what Covid-19 took from them.”

One study found in-person learning in New York City public schools was not associated with increased prevalence and incidence of the virus compared to the general community, so long as strict health protocols were followed.

Still, some parents are preparing to keep their children home from school out of fear of the delta variant, which has roiled reopenings in districts elsewhere in the U.S.

Tanesha Grant, a Harlem parent and chief executive of Parents Supporting Parents NYC, said she isn’t planning to send her 14-year-old son to The Eagle Academy for Young Men of Harlem, where he is slated to begin the ninth grade on Monday. Grant said she emailed school leadership and was told that keeping her son home would be treated as an absence but that without a remote option provided by the city, she didn’t know what else to do.

“It’s really stressful -- this system that is supposed to take care of your children, when you feel like you’re putting them in danger,” Grant said.

--With assistance from Emma Kinery.