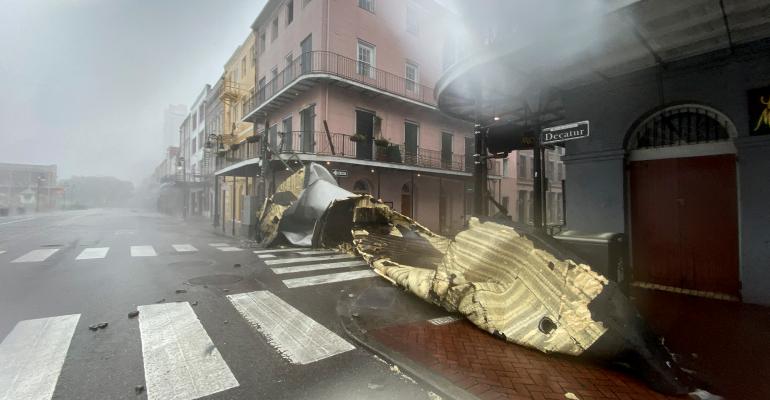 Ida drove so much water off the Gulf of Mexico that the Mississippi River flowed backward.

(Bloomberg) -- Tropical Storm Ida pummeled New Orleans and the Louisiana coast overnight with lashing rain and ferocious gusts, leaving much of the region without electricity and bracing for widespread floods.

The storm, wielding some of the most powerful winds ever to hit the state, drove a wall of water inland when it thundered ashore Sunday as a Category 4 hurricane and reversed the course of part of the Mississippi River. All of New Orleans was without power when evening fell on Sunday. As Ida moves north, it’s expected to unleash as much as 2 feet (61 centimeters) of rain.

U.S. gasoline futures jumped on Monday as the storm disrupted refineries and other oil-processing facilities.

The New Orleans Fire Department said on social media that a grocery store had caught fire. In Kenner, just outside New Orleans, at least a dozen fires were reported, according to the city’s Facebook page.

“We’re in for some historic floods,” said Jim Rouiller, lead meteorologist at the Energy Weather Group. “The rainfall -- that is going to be the next story.”

Ida struck New Orleans on the 16th anniversary of Hurricane Katrina, the costliest tropical cyclone in U.S. history that left much of the city in ruins. The levees, pumps and other infrastructure rebuilt after that 2005 storm are being put to their biggest test yet. Louisiana’s hospitals are already overwhelmed with more than 2,600 coronavirus patients.

President Joe Biden approved a federal disaster declaration for Louisiana to assist with recovery. While the storm’s impact wasn’t fully clear early on Monday, and first responders didn’t plan to start answering search and rescue calls until sunrise, signs have already emerged that Ida’s toll has been dire. The storm was responsible for at least one death, as the Louisiana health department said a man in Ascension Parish was killed when a tree fell on his home.

More than 1 million homes and businesses in Louisiana and about 100,000 in Mississippi were without power, according to Poweroutage.us. The utility serving New Orleans, Entergy Corp., said some could be in the dark for weeks. The company’s transmission system suffered “catastrophic damage,” it said in a statement.

Ida drove so much water off the Gulf of Mexico that the Mississippi River flowed backward. In downtown New Orleans, the river has already risen by 7 feet in the last 24 hours, according to the National Weather Service.

Officials in Plaquemines Parish southeast of the city warned residents to evacuate after reports that water overtopped a levee. In St. John the Baptist Parish, west of Lake Pontchartrain, officials reported at least one case of residents trapped in their attic and seeking to be rescued, according to local media.

“We are confident that the system will perform as designed and we all ride out the storm,” Kelli Chandler, regional director of the Southeast Louisiana Flood Protection Authority-East, said in an interview Sunday.

Ida made landfall amid the final stretch of what’s been a summer of extreme weather in the U.S. and around the globe. Six tropical cyclones have now struck the U.S., and the high in Portland, Oregon, hit an unthinkable 116 degrees in June. Floods killed 20 people this month in Tennessee, while drought- and heat-wave-fueled wildfires blackened huge swaths of California, Greece, Turkey and Siberia, sending smoke over the North Pole for the first time on record.

Although Katrina made landfall with 126 mph winds, that doesn’t necessarily mean it was weaker. At its peak over the Gulf, Katrina’s winds reached about 175 mph, making it a Category 5 system with a monstrous storm surge. And while Ida is big, Katrina was even bigger -- with hurricane-force winds that reached out 125 miles from its eye. Ida’s extend 50 miles.

After swirling past New Orleans, Ida is projected to cut across Mississippi and work its way northeast, rolling over New Jersey and New York later this week before blowing back out to sea.

Aside from the swelling Mississippi, several smaller rivers in eastern Louisiana and southern Mississippi are expected to rise more than 10 feet in the next few days, according to the Lower Mississippi River Forecast Center. The Big Black River in Bentonia, Mississippi, could rise by more than 17 feet between Sunday and Wednesday.

“A lot of destructive potential is still ahead of us from the inland wind and from the inland rainfall, too,” Ryan Truchelut, president of Weather Tiger LLC, said in an interview.

The storm could damage close to 1 million homes along the coast, according to CoreLogic. It ran directly over chemical plants, refineries and the Louisiana Offshore Oil Port. All told, damages and losses could exceed $40 billion, said Chuck Watson, a disaster modeler at Enki Research. That would make it among the costliest ever in the U.S.

Oil companies bracing for the storm have already halted the equivalent of 1.74 million barrels of daily crude production and almost 2 million barrels a day of refining capacity. Royal Dutch Shell Plc, BP Plc and others shut offshore platforms and evacuated crews. Key agricultural export elevators are also in the direct path of the hurricane, and the interruption to container terminals will likely affect grain shipments.

WWL-TV reported damage to barges at the docks of one of Valero Energy Corp.’s oil refineries just west of New Orleans.

Ralph Tovar, a visitor from Chicago who was stranded in New Orleans because his flight was canceled, tore apart a plastic umbrella bag to fashion a rain-proof hood as he stood inside the oldest cathedral in the U.S., St. Louis Cathedral, as the first gales began to lash the city.

--With assistance from Dylan Griffiths.