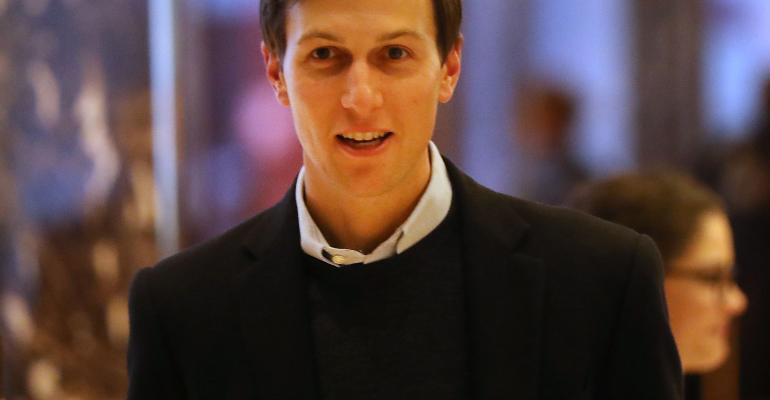 (Bloomberg) -- Jared Kushner divested from dozens of investments when he became a White House adviser. One that he held onto paid off when he sold it last month.

Kushner was allowed to defer the taxes on his profits from the sale of his stake in Cadre, the online real-estate company he co-founded, thanks to a sign-off from the U.S. Office of Government Ethics.

The certificate of divestiture he received is typically awarded to incoming federal employees who have to shed assets that could complicate their public work. Getting one for declaring a conflict after so much time has passed is far less common, according to several people familiar with the ethics office’s work.

“These certificates of divestiture are only supposed to be used if they identify that the holding is a conflict of interest,” said Virginia Canter, a former ethics adviser to Democratic presidents who is now chief ethics counsel for Citizens for Responsibility and Ethics in Washington, a group that has been critical of the Trump administration. “They’ve been contending all along that it isn’t a conflict of interest for him to hold this.”

The conflict calculation changed last month. Kushner attorney Abbe Lowell said Kushner was divesting so that Cadre could avoid causing him conflicts with Cadre’s future business deals. Lowell and Alan Fleischmann, a spokesman for Cadre, wouldn’t comment for this article.

By waiting, Kushner was able to sell at a higher valuation than he could have when he entered the administration of his father-in-law, President Donald Trump. After Kushner joined the White House in 2017, he said his stake in Cadre was worth $5 million to $25 million. The company subsequently got a round of funding that valued it at $800 million. Kushner’s latest government filing valued his stake at $25 million to $50 million.

Neither Kushner nor Cadre provided a sales price for his stake. Because he invested early in the company, most of the sale proceeds would be profits and therefore taxable to him. At the $50 million level he recently disclosed, the tax bill might have approached $10 million.

The ethics office said: “OGE is committed to transparency and citizen oversight of government. However, OGE does not respond to questions about specific individuals.” While it offers guidance to government officials on issues including potential conflicts of interest, the ethics office typically relies on the information presented to it and doesn’t have the capability to perform investigations or audits, according to people familiar with its operation.

For Kushner’s first three years in the White House, his representatives said the stake presented no conflict, pointing out he’d given up his management roles at the company and become a passive shareholder.

Even so, high-level representatives from Cadre were frustrated by the complications caused by its ties to Kushner and made it known to him that they wanted him to sell, Bloomberg News has reported. In an interview published in Forbes last year, Ryan Williams, the company’s CEO and Kushner’s co-founder, said, “I can’t force anybody, really, to sell their equity.”

In 2018, Cadre held talks with the SoftBank Vision Fund about a possible investment in the start-up. The fund gets much of its capital from the Saudi government; Kushner’s portfolio as a senior adviser to the president includes Mideast policy. The fund wanted Kushner to sell, people familiar with the talks have said. He didn’t, and the deal fizzled.

Read More: Jared Kushner Helped Put Cadre on the Map, Then Held It Back

When Bloomberg News reported on Feb. 28 that Kushner was divesting, Lowell said Kushner had complied with all ethics rules and made the decision to sell after Cadre “decided to pursue opportunities that could unknowingly to Mr. Kushner become future conflicts.”

“Jared and Cadre are confident that this divestment will allow Jared to continue focusing on his work in Washington and further accelerate the company continuing to fulfill its mission of expanding access and liquidity in commercial real estate investing,” Fleischmann said at the time.

Last year, Cadre received approaches from investors that posed potential conflicts for Kushner, according to people familiar with the matter, and the company flagged them to Lowell. In December, Kushner moved his shares into a trust to begin the divestment process after consulting White House counsel and the Office of Government Ethics.

The sale may make it easier for Cadre to do business, especially overseas, as it seeks new equity investments and new clients for its real-estate platform. The company operates a marketplace to sell stakes in properties to high-net-worth individuals. Like other marketplace operators, Cadre doesn’t make public the identities of its clients.

Ethicists raised concerns that parties could seek to curry favor with Kushner with investments in the fund, while representatives for Kushner say he has maintained a firewall between himself and the company.

Cadre’s Kushner ties run deep. The company was co-founded by Jared Kushner, his brother Josh Kushner and Williams. The company’s first completed deal cycle, used as a proof of concept for potential investors, relied on a partnership with Kushner Cos., the Kushner family’s development company, to sell a handful of residential buildings in Queens, New York. Its offices are in the Puck Building in downtown Manhattan, one of the Kushners’ most valuable properties, and Josh Kushner maintains a stake through Thrive Capital, his venture firm, with offices upstairs from Cadre.

Cadre has also begun investing in the “opportunity zone” program, which provides capital gains tax breaks for investing in designated poor areas. The program was created with the passage of Trump’s 2017 tax law, and backed by Kushner

--With assistance from David Kocieniewski.

To contact the reporter on this story:
Caleb Melby in New York at [email protected]