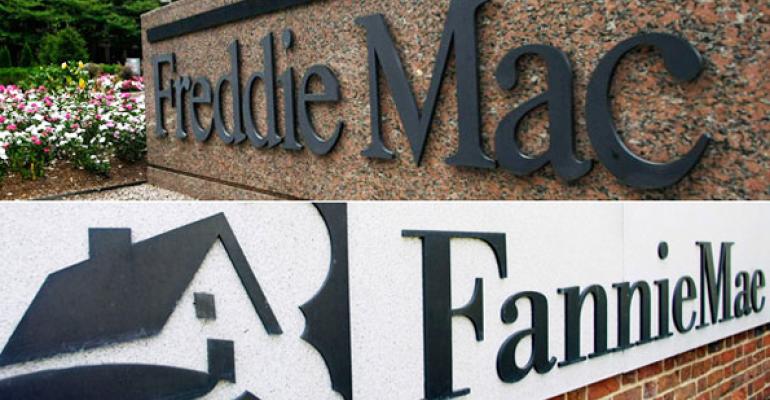 Both sides now are asking the Supreme Court to review that conclusion. The suing shareholders say everyone would benefit from clarity.

(Bloomberg) -- The U.S. Supreme Court could say as early as Friday whether it will intervene in a high-stakes fight over hundreds of billions of dollars in Fannie Mae and Freddie Mac profits that investors say the federal government has collected illegally.

The justices meet Friday to discuss whether they will review scores of cases, including appeals from each side on the so-called net-worth sweep, which has funneled more than $300 billion in Fannie and Freddie profits to the Treasury since 2013.

Together, the appeals could determine whether the sweep can continue, whether the shareholders have leverage to extract an expensive settlement, and even how much job security Federal Housing Finance Agency Director Mark Calabria will have. The dispute could also affect plans by President Donald Trump’s administration to end the government’s control of Fannie and Freddie.

The case “is of immense practical importance,” the administration told the justices in court papers.

Fannie Mae and Freddie Mac help keep the U.S. housing market humming by buying mortgages from lenders and packaging them into bonds that are sold to investors with guarantees of interest and principal.

After the housing market cratered in 2008, the companies were put into federal conservatorship and sustained by taxpayer aid. They have since returned to profitability and paid $115 billion more in dividends to the Treasury than they received in bailout funds. Since 2013, nearly all their profits have been sent to the Treasury under the net-worth sweep.

In their lawsuit, three investors contend the FHFA exceeded its authority when it set up the net-worth sweep in 2012. The administration counters that the 2008 law that established the FHFA precludes lawsuits over the arrangement.

Both sides now are asking the Supreme Court to review that conclusion. The suing shareholders say everyone would benefit from clarity.

“So long as there is a credible threat that litigation will invalidate the net-worth sweep, a cloud of uncertainty will hang over the companies’ capital structure,” the shareholders told the Supreme Court. “Investors will not be willing to supply the tens of billions of dollars in new capital that are essential to Treasury’s reform plan.“

Shares of Fannie and Freddie have surged over the past year on expectations that the courts may act and that the Trump administration will take steps to end U.S. control. A move to free the companies is expected to include an initial public offering or other event where Fannie and Freddie seek to raise new capital from investors.

The Trump administration told the high court that legal uncertainty “may frustrate the federal government’s proposed and ongoing efforts to reform the housing finance system and to end the ongoing conservatorships of the enterprises.”

Complicating matters is a second appeal, filed by the investors, that says Congress unconstitutionally limited the circumstances under which the president can fire the FHFA director. The investors say that violation of the Constitution’s appointments clause offers an additional ground for tossing out the net-worth sweep.

The Supreme Court is already set to consider whether Congress violated the appointments clause by insulating the director of the Consumer Financial Protection Bureau from being fired. Arguments are set for March 3 and a ruling is likely by the end of June. The court could defer acting on the Fannie and Freddie investors’ appeal until the CFPB case is resolved.

Ironically, that line of argument could undercut Calabria, a former chief economist to Vice President Mike Pence and champion of efforts to free Fannie and Freddie from government control.

Calabria just began a five-year term that could let him outlast Trump. Should the courts rule that the director was given too much job protection, and should a Democrat win the presidential election in November, Calabria would be vulnerable to being fired next year by the new president.

Calabria and Treasury Secretary Steve Mnuchin have said they plan to make additional changes to Fannie and Freddie’s bailout agreement and would eventually like to end the sweep.

They took a key step toward doing that in September when they let Fannie and Freddie retain more of their earnings than previously allowed. The deal essentially halted the net-worth sweep, and it will likely be more than a year before the companies will have to send additional earnings to Treasury.

Resolving legal issues surrounding Fannie and Freddie could be a crucial step if the companies are going to attract new investors, according to analysts. It could spur the administration to push ahead with its planned changes and perhaps even consider a settlement.

“The Supreme Court’s consideration of this case is significant insomuch as it impacts the administrative reform conversation,” said Isaac Boltansky, financial regulation analyst at Compass Point Research & Trading. “The shareholder cases are meaningful because they could conceivably force action or expedite timelines, but this is still predominantly about what the FHFA and Treasury Department can accomplish.”