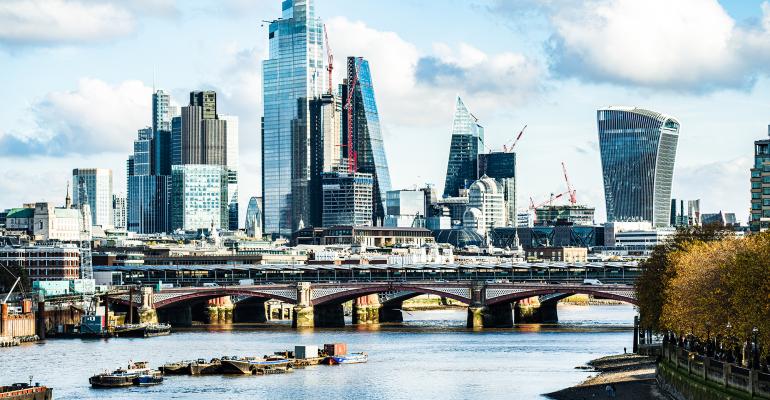 The U.K. government has long sought to lure Chinese investment, a process that started in earnest in 2014.

(Bloomberg) -- The U.K.’s relations with China may be at a low ebb but China Construction Bank Corp.’s City of London outpost is banking on ever closer financial flows between the two countries.

The branch is the sole renminbi clearing bank in the U.K., making it an essential conduit to potentially staggering flows of Chinese money and investment. It has cleared some 64 trillion yuan ($10 trillion) of transactions since 2014 -- the largest volume outside of Asia -- and its top U.K. executive is planning for growth.

Yang Aimin, who has run the U.K. operations of China’s second-largest lender since 2018, said in an interview last week he is targeting double-digit clearing volume growth in 2022 after it grew 18% last year to 11.9 trillion yuan. He’s also expecting the business of servicing Chinese companies listed in London to grow.

“Hong Kong has embarked on a path that can be largely replicated by London,” he says, noting the existing Shanghai-London Stock Connect -- which enables Chinese firms to list in the U.K. and vice versa -- could ultimately open the door to a similar arrangement for trading bonds.

His ambitions are good news for the City of London, which is looking to burnish its credentials as the international finance center of choice now it sits outside the European Union. The U.K. government has long sought to lure Chinese investment, a process that started in earnest in 2014 with a deal allowing CCB to facilitate offshore yuan clearing in London and the issuance of a 3 billion yuan bond in London in 2016, the first sovereign RMB bond issued outside of China and Hong Kong.

The mood music has soured somewhat in recent years, with British lawmakers growing increasingly wary of closer ties with China. The U.K. will join countries including the U.S. and Australia in a diplomatic boycott of the Winter Olympics in Beijing, amid growing criticism of China’s human rights record, including the crackdown in Hong Kong and concerns over human rights abuses facing the Uyghur minority.

But Yang remains hopeful on the outlook for closer financial ties, saying one way the U.K. could encourage more investment is to allow renminbi bonds to be accepted as collateral in U.K. markets. That could bolster the amount of renminbi holdings and promote more trading in all types of yuan assets.

“We have discussed the collateral inclusion many times with U.K. authorities over the years, I hope they can feel our sincerity and act quickly,” the 56-year-old Harvard graduate said.

CCB provides foreign exchange and clearing services to the four Chinese listings in London including Huatai Securities Co. and China Pacific Insurance Group Co., and Yang would welcome more dual listings in London, although other options are proliferating. Last month, the China Securities Regulatory Commission announced an extension of the Stock Connect program to eligible listed companies in Germany and Switzerland, paving the way for such listings elsewhere in Europe.

The Hong Kong-listed shares of China Construction Bank, which has a market value of about $193 billion, are down about 3% in the past year.

And London remains a relative minnow when it comes to offshore renminbi trades. Hong Kong dominates with three quarters of the market with the U.K. in second place on 6.6%, ahead of Singapore’s 3.3% share, according to data compiled by the Society for Worldwide Interbank Financial Telecommunication, or SWIFT.

It’s a familiar challenge for Yang, who spent his early career at CCB promoting the use of renminbi interest rate swaps, a hedging tool common in global markets that didn’t exist in China until 2006. Yang said he found himself pitching the products repeatedly during his stint as deputy general manager of trading at CCB’s Beijing headquarters.

His current office -- sitting in the shadow of the Gherkin and NatWest Tower -- has about 130 staff offering services from corporate banking to clearing. He says he has no plans to expand into investment banking for now, relying instead on CCB’s Hong Kong arm to provide those services to clients.

“Some investors got burned, but in the long term I think it is a good thing to break free of the expectation that Chinese government will always bail out these firms,” he said. “As China transitions into a more market-driven place, foreign investors need to accept China bonds can default, corporates as big as Evergrande can fall.”

He strikes a similarly optimistic note on the yuan’s prospects as China’s central bank bucks the broader trend of raising interest rates.

--With assistance from Wenjin Lv, Ran Li and James Boxell.