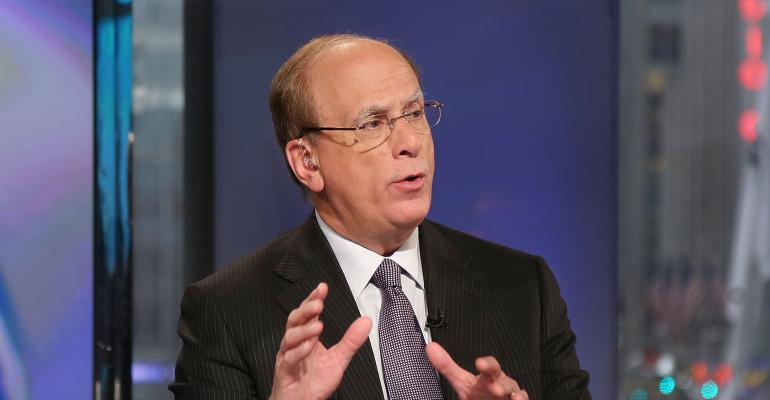 For BlackRock and others, ESG investing has become a highly lucrative strategy.

(Bloomberg) -- BlackRock Inc. Chief Executive Officer Larry Fink warned that companies will be left behind if they don’t embrace sustainable business practices, hitting back at critics who say that considering environmental impact in investing decisions is a politically motivated fad.

“Stakeholder capitalism is not about politics,” Fink wrote in his annual letter to CEOs. “It is not a social or ideological agenda. It is not ‘woke.’”

In the decade Fink’s been writing his letter, BlackRock has ballooned to more than $10 trillion in assets, giving it significant stakes in many large companies. It’s also been a major beneficiary of the boom in sustainable investing: its portfolio includes $509 billion in sustainable assets, more than double the amount a year ago.

It also sees more on the horizon. But BlackRock’s growth and Fink’s high-profile missives have drawn critics from all corners. On the left, progressives complain that BlackRock and others aren’t using their financial clout to do more, faster. On the political right, some U.S. states have declared that they won’t do business with asset managers that, for example, eschew oil and gas investments.

Read More: How BlackRock Made ESG the Hottest Ticket on Wall Street

Fink used this year’s letter, published on the firm’s website late Monday in New York, to clearly state its position on fossil fuels. “Divesting from entire sectors – or simply passing carbon-intensive assets from public markets to private markets – will not get the world to net zero,” he said. “And BlackRock does not pursue divestment from oil and gas companies as a policy.”

In fact, it does the opposite. The firm’s ESG exchange-traded funds not only hold stakes in fossil-fuel giants such as Exxon Mobil Corp. and Chevron Corp., its biggest ESG ETF holds a heavier weighting in 12 fossil-fuel stocks than the S&P 500 does, according to Bloomberg Intelligence, the research arm of Bloomberg.

Capitalism -- not climate -- took center stage in this year’s letter, a marked change from the last few years. “We focus on sustainability not because we’re environmentalists, but because we are capitalists and fiduciaries to our clients,” he wrote, encouraging companies to prioritize long-term profits over short-term results.

He also called on companies to make themselves more appealing to employees in a tight labor market, saying that “workers demanding more from their employers is an essential feature of effective capitalism.”

Fink didn’t mention climate until the final sections of his letter, and then just four times, including once in the context of the Task Force on Climate-related Financial Disclosures and once to say that businesses “cannot be the climate police.” He also emphasized the immediate need for fossil fuels to ensure energy supplies, saying that ambitious goals take time.

Environmental activists almost immediately registered their disappointment, accusing Fink of trying to play both sides. “Fink apparently wants to be above the political fray, but by playing nice with those profiting off of the causes of climate change, he’s making the political choice to reject climate science,” said Moira Birss, Climate and Finance Director for Amazon Watch, a rainforest protection group based in California.

For BlackRock and others, ESG investing has become a highly lucrative strategy. Philipp Hildebrand, the firm’s vice chairman, said in October that BlackRock expects “a vast reallocation of capital toward sustainable products.”

Fink also prodded shareholders and governments for action. Governments, he said, should offer more guidance on sustainability policy, regulation and disclosure across markets. BlackRock is also working on an initiative that would give clients more power to vote their proxies.