The 17 Most Dynamic American Cities 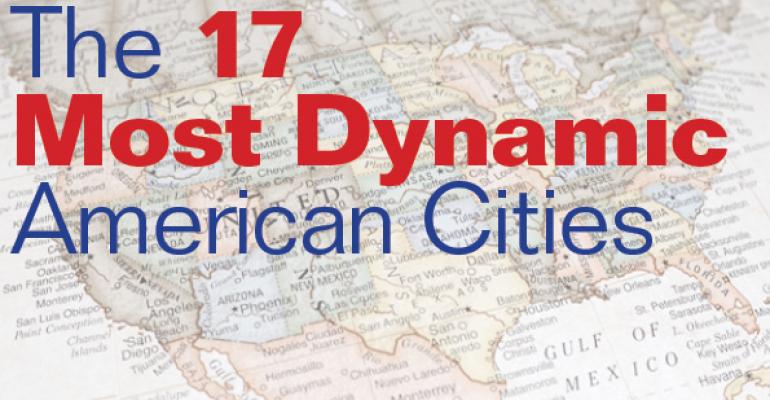 Which are the top American cities today, how do they rank on a global scale, and what will they be like tomorrow? The answers to these questions can vary from one study to another, depending on the type of data being used. We looked at five studies conducted within the past three years; here, we list the 17 American cities that were included in at least one of the studies. The results, which follow, are sometimes predictable (New York and Los Angeles consistently take top slots, and each survey is dominated by Chinese cities) and often surprising (at home, San Diego and San Jose both hold much future promise; in the world, Lima, Dubai and Jakarta are all up-and-coming).

In May, the British newspaper The Guardian published a study, conducted by British urban brand consulting company Saffron, that measured two aspects of a city’s brand: its assets (attractions, climate, infrastructure and transport, safety and economic prosperity); and its “buzz,” a combination of social media (Twitter sentiment analysis and Facebook likes) and news media mentions. Assets and buzz were then graded on a score of 1 to 10 and the numbers were added to produce the final score. In Saffron’s survey, Los Angeles came in at no. 1 and New York City grabbed no. 2, followed by London (3), Paris (4), Seoul (5), Barcelona (6) and Rio de Janeiro (7), San Francisco (8), Las Vegas (9) and Dubai (10).

Utilizing data from PricewaterhouseCoopers and the Partnership for New York City, the international organization City Mayors, produces rankings of the “World’s Most Important Cities,” according to 10 key factors: intellectual capital and innovation; technology readiness; transportation and infrastructure; demographics and livability; economic clout; health, safety and security; ease of doing business; and sustainability. At no. 1, New York City is the only traditional powerhouse to rank within the City Mayors’ top 5, followed by Toronto (2), San Francisco (3), Stockholm (4), Sydney (5), London (6), Chicago (7), Paris (8), Singapore (9) and Hong Kong (10).

The Atlantic magazine’s CityLab produces a combined global city index (CGCI) of U.S. Cities ranked “in terms of their global clout.” The rankings are based on CityLab’s CGCI, The Economists’ Global City Competitiveness Index; A.T. Kearney’s Global Cities Index; the Global Financial Centres Index; and the McKinsey Global Institute’s projections of city economic output for 2025. The CGCI also takes into economic population data from the American Community Survey, output from the Bureau of Economic Analysis and wages and salaries from the Bureau of Labor Research.

But where will American cities be in the future? Foreign Policy (FP) magazine has ranked the top 75 cities out of 2,600 cities around the world in terms of how these cities will be doing in 2025. Using McKinsey Global Institute’s Cityscope database, FP made estimates “based on underlying demographic and GDP per capital growth projections, and subject to significant uncertainty in evolution of everything from population and migration patterns to per capital GDP growth and exchange rate outlook.” For FP, only New York City figured into the top 10, coming in at no. 7 in a list dominated by China: Shanghai (1), Beijing (2), Tianjin (3), Sao Paolo (4), Guangzhou (5), Shenzhen (6), Chongqing (8), Moscow (9) and Tokyo (10). Los Angeles almost made the top 10 cut, coming in at no. 12, and Seattle brought up the rear at no. 74.