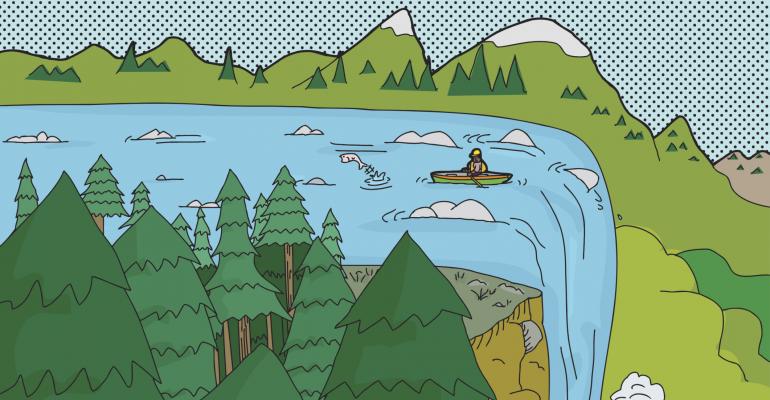 Sometimes, You Have to Take Risks

There is an opportunity cost to always waiting for someone else to develop the next technology innovation. If you want to stay ahead of the competition, you sometimes have to stay on the bleeding edge.

I recently attended a new, unique gathering of primarily software developers hosted by Orion Advisor Services. There’s a lot to like about Orion: They’ve got an excellent product, and excellent culture and excellent people. They also have a great network of partner firms that they collaborate with. Perhaps the firm’s most potent business advantage, however, is their willingness to go beyond the cutting edge and to tread on the bleeding edge.

I often hear executives at broker-dealers and other firms proudly exclaim that they want to be on the cutting edge of technology, but not the bleeding edge. Orion seems to understand that if you aim for the cutting edge in your technology development, by the time it is implemented, it is no longer cutting edge. There is an opportunity cost to always waiting for someone else to develop the next technology innovation. If you want to stay ahead of the competition, you sometimes have to stay on the bleeding edge.

Where other firms in the industry are sometimes hesitant to take a risk, Orion President Eric Clarke and his team will boldly go where no firm has gone before. Not every idea works out as intended, but when they do get something right, it can pay large dividends. One recent example of a seemingly risky idea that succeeded was the recently concluded FUSE event that took place in Park City, Utah.

The idea was simple: Get about eighteen developers from a bunch of partners together in a remote mountain lodge for a “hackathon” over a long weekend, to do nothing but write apps that integrate with the Orion platform. They would then have a panel of judges, including Bill Winterberg (FPPad), JD Bruce (Abacus Wealth Partners), Ryan Beach (CLS Investments), Billy Oliverio (United Planners) and yours truly, me, (T3 Technology Tools for Today) present awards to the winners in various categories.

Well, the idea proved a little more popular than originally anticipated. A total of fifty-two people showed up in Utah for FUSE. It was not strictly speaking a hackathon, because some folks started their projects before they arrived, and some attendees wrote integrations with each other instead of or in addition to the ones they wrote with Orion, but the end result was impressive. A great deal of creative energy was unleashed and Orion, their partners and their clients will surely benefit from the FUSE experiment.

Whether you are a client of Orion and their partners or not, I believe FUSE demonstrates that a group of like-minded developers can create solutions that address real business problems that advisors face in a relatively short period of time, if they devote some time and resources. We need more of this sort of risk-taking from our technology providers.

When have you taken a risk that turned out better than expected? Post your comments here and I will respond on the discussion boards.

Joel P. Bruckenstein is a freelance magazine writer, book author, virtual office consultant and fee-only financial advisor. He is the publisher of Virtual Office News. In addition to his writing duties, he is the president of Global Financial Advisors, Inc, a fee-only financial planning and investment advisory firm in Miramar, Fla. He previously served as senior technology editor at MorningstarAdvisor. You can follow him on Twitter @FinTechie.