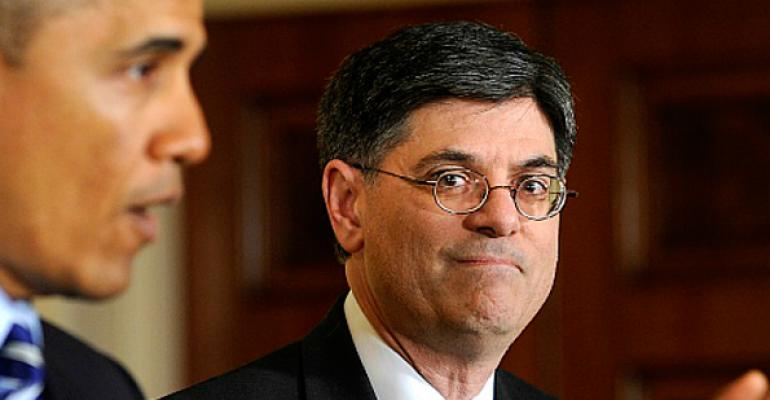 Louis Navellier on Lew’s subpar resume, dangerous agenda and business failures, and how you’ll have to adjust your investment strategy should he get the job.

President Obama’s nomination of Jack Lew as the next Treasury Secretary baffles me. Jon Corzine has far more Wall Street experience than Jack Lew, including 25 years at Goldman Sachs, rising to CEO in 1994. Historically, America’s Treasury Secretaries are appointed based on their financial expertise, so they can give the President sage advice based on their decades of experience in the financial community. But that is not the case with Jacob “Jack” Lew. Consider these highlights from his resume:

In nominating Jack Lew as Treasury Secretary last Thursday, President Obama claimed Jack Lew was responsible for balancing the budget – three times – in his role as Director of the White House Office of Management and Budget (OMB) under Bill Clinton. The truth is that Lew was Deputy Director of OMB – a small fish in a big pond – for most of the Clinton Era, including the time the Balanced Budget Act of 1997 passed Congress. Jack Lew did not become Director of the OMB until May of 1998.

The people most responsible for passing the 1997 Balanced Budget Act were the Republican House leaders, Dick Armey (House Majority Leader), Newt Gingrich (Speaker of the House), and John Kasich (Chairman of the House Budget Committee), along with a very co-operative President Clinton who supported Congress’ plans for dramatic cost-cutting, including “ending welfare as we know it.”

Another big contributor to the balanced budgets in 1998 through 2001 was the global prosperity following the end of the Cold War and the birth of the Internet, two unique historical blessings happening at once.

Turning from the 1990s to today’s realities, if you want to know what Jack Lew might do about balancing our future budgets, look to his more recent run as Director of OMB from late 2010 to early 2012.

According to Bob Woodward’s latest book, The Price of Politics, Jack Lew was among the most divisive players in the August 2011 debt-ceiling drama. Speaker of the House John Boehner personally asked President Obama to keep Jack Lew out of the room, since Lew would adamantly say “no” 999 times out of 1,000. Other Republican negotiators said Lew preferred to tell others “why they were wrong instead of negotiating.” As a result, Jack Lew is widely viewed as partisan and will act as President Obama’s bulldog. The fact that President Obama would appoint a “stonewalling” expert at this point in the new debt-ceiling negotiations tells us that the President is not interested in a compromise.

Specifically, Senator Sessions wrote yesterday in the National Review that Lew “submitted to Congress the most dangerously irresponsible plan we’d ever seen, one panned by virtually every major editorial board in the country. Mr. Lew then launched a nationwide PR campaign designed to mislead the public about the budget that included false statements in Congressional testimony. Most infamously, Mr. Lew claimed his plan ‘would not add to the debt’ and defended this statement as ‘accurate’ when testifying before the Budget Committee. But that plan, according to the White House’s own budget tables, would have added $13 trillion overall to the debt and never once had a deficit of less than $600 billion — with deficits getting larger with time. In just ten years, mandatory spending would increase by more than 80 percent.”

Then, Senator Sessions listed some of Lew’s “many egregious falsehoods” about these huge deficits:

Senator Sessions concluded, “Not only was Lew the architect of two failed budgets, but he was the point man in the White House for its campaign of financial deception. For instance, he was the budget director and was present when President Obama notoriously gave an address outlining a framework to save $4 trillion (a complete fantasy) while decrying Paul Ryan’s very real plan to save trillions as an attack upon the weak and vulnerable. Mr. Lew, a man whose duty it was to present a truthful picture of the nation’s financial condition, did the opposite. He presented a false picture. No man serving in the White House has done more to scuttle the hopes of a meaningful long-term debt agreement than Jack Lew. To confirm him to the premier financial post in the country would be an acceptance of such tactics … it must not happen.”

As bad as his performance has been recently, I’m even more concerned about Lew’s failed experience in business, as an executive at Citigroup during the explosion of that bank’s kinky leveraged debt products.

Lew’s Sole Business Experience (at Citigroup) was a Disaster

Between his long stints in government and at New York University, Jack Lew has had just one major run in big business, at Citigroup from June 2006 to December 2008. During the crisis year of 2008, his Alternative Investments division lost billions of dollars. In the first quarter of 2008 (his first quarter at the helm), that unit lost $509 million, but then Citigroup stopped publicly disclosing that division’s numbers.

I can’t find any source that can compute the total damage completely, but the company that absorbed the Alternative Investment division lost $20.1 billion in 2008, according to Citigroup’s filings with the SEC.

Prior to his 30 months there, Citigroup invented several kinky financial derivatives like Structured Investment Vehicles (SIV), which helped lead to the downfall of the mortgage market. In the end, despite their role in helping cause the crisis, Citigroup received $45 billion in bailout funds and secured further protection for up to $300 billion in any losses that might follow from their inventory of toxic assets.

Jack Lew didn’t create most of Citigroup’s toxic assets, but as Chief Operating Officer of Alternative Investments, he was in charge of those products when his division effectively “blew up” financial markets in 2008 – from the failure of Bear Stearns in March 2008 to the death of Lehman Brothers in September.

Under Lew’s watch, the Alternative Investments division marketed the family of Falcon leveraged muni funds that promised high yields but lost up to 97% of principal by being leveraged by up to 8-to-1. The Falcon funds were publically marketed to institutions as “safe muni substitutes.” One such fund, Falcon Plus Strategies, launched in late 1997, promised twice the returns of Falcon Strategies Two, but the Falcon family of funds fell to earth when Citigroup made a series of bad bond bets at 8-1 leverage.

During his 30 months at Citigroup, shares in Citi’s widely-held stock fell 86%, at which time Lew entered the Obama administration as deputy Secretary of State under Hillary Clinton. Later on, Lew’s “Alternative Investments” division was such an embarrassment to Citigroup that it was re-launched as “Citi Capital Advisors.” Thus ends the brief business resume of our Treasurer-designate.

Even though he has his own baggage, I truly believe Jon Corzine could be a better Secretary of the Treasury, since he at least had five years of successful experience as CEO of Goldman Sachs from 1994 to 1999, and The Wall Street Journal reported last Friday that investors in Corzine’s failed MF Global may get up to 93% of their money back.

How to Invest During a Jack Lew-Led Treasury

Assuming he passes muster in the Democratically-controlled Senate and takes office shortly, what can we expect from a Treasury Department led by a man who seems to be a political attack dog for the President?

I expect to see a continuing decline of the dollar.  I expect Lew to promise his version of “declining debt,” which seems to be a “decline” from $1.3 trillion to $1.1 trillion in red ink. Four more years of trillion-dollar annual deficits along with the Federal Reserve’s monetary easing will cause the U.S. dollar to fall, which I believe will give an extra “tailwind” to three major investment categories:

#1: Commodities should rise since they are mostly denominated in U.S. dollars. As the dollar falls, most commodities tend to rise in U.S. dollar terms. Gold and silver, for instance, virtually doubled during President Obama’s first term. I wouldn’t be surprised to see them have significant gains during his second term.

#2: Big multi-national companies should flourish since they can compete better overseas with a weak dollar and they can book profits in other currencies before translating those earnings back into dollars.

Louis Navellieris Chairman of the Board, Chief Executive Officer, and Chief Investment Officer of Navellier & Associates, Inc., located in Reno, Nevada. www.navellier.com.  Mr. Navellier has been active in the management of institutional and individual client accounts since 1987.  He received a B.S. in business administration in 1978 and an M.B.A. in finance in 1979 from California State University - Hayward.

Important Disclosures:This report is for informational purposes and is not to be construed as an offer to buy or sell any financial instruments and should not be relied upon as the sole factor in an investment making decision. The views and opinions expressed are those of the author at the time of publication and are subject to change. There is no guarantee that these views will come to pass. As with all investments there are associated inherent risks. Please obtain and review all financial material carefully before investing. Although the information in this communication is believed to be materially correct, no representation or warranty is given as to the accuracy of any of the information provided. Certain information included in this communication is based on information obtained from sources considered to be reliable. However, any projections or analysis provided to assist the recipient of this communication in evaluating the matters described herein may be based on subjective assessments. Potential investors should consult with their financial advisor before investing in any investment product.