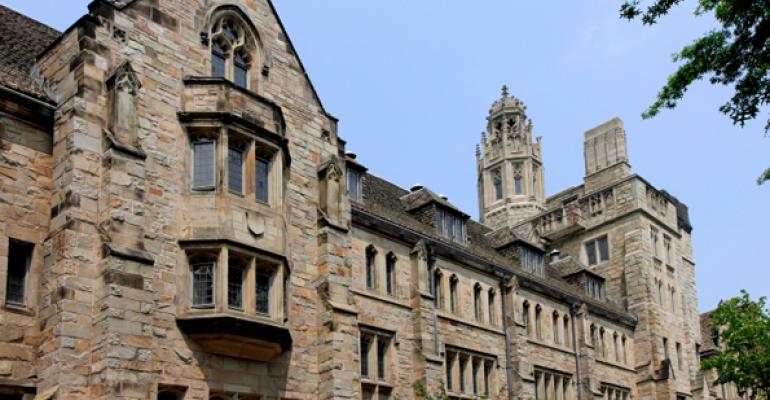 Yale’s 3.4% Gain Is Top Performer as Most Endowments See Losses

Yale’s endowment declined in value to $25.4 billion, net of spending that supports faculty salaries, student scholarships and other expenses, in the year ended June 30, the university in New Haven, Connecticut, said Friday in a statement. Yale, which has the second-largest U.S. school fund behind Harvard, has the best return among school funds that have posted so far. The endowment has been led by David Swensen for three decades.

Two of Yale’s Ivy League peers posted negative returns. Harvard on Thursday said its investments declined by 2 percent, lowering the value of the largest fund in higher education by $1.9 billion to $35.7 billion. The University of Pennsylvania’s loss was 1.4 percent. More than a dozen university endowments with assets of more than $1 billion have reported investment declines as results come in over the next month.

Endowments with more than $500 million lost a median 0.73 percent, according to the Wilshire Trust Universe Comparison Service. The data, from fund custodians, is gross of fees, while most schools report returns including fees.

Yale said its target asset allocation for fiscal 2017 was more than 50 percent in illiquid investments, including private equity and “absolute return,” which includes hedge funds.

Yale’s 10-year annualized return is 8.1 percent. The fund has consistently performed well, proving its success in assets such as venture capital; the school disclosed this year its original $2.7 million investment in LinkedIn Corp. produced $84.4 million in gains.

Many endowments have sought to replicate the so-called Yale model, pioneered by Swensen, which prizes more illiquid assets including private equity. The school’s highest target allocation for fiscal 2017 is 22.5 percent in absolute return, followed by 16 percent in venture capital and 15 percent each in foreign equity and leveraged buyouts, according to the school’s statement.