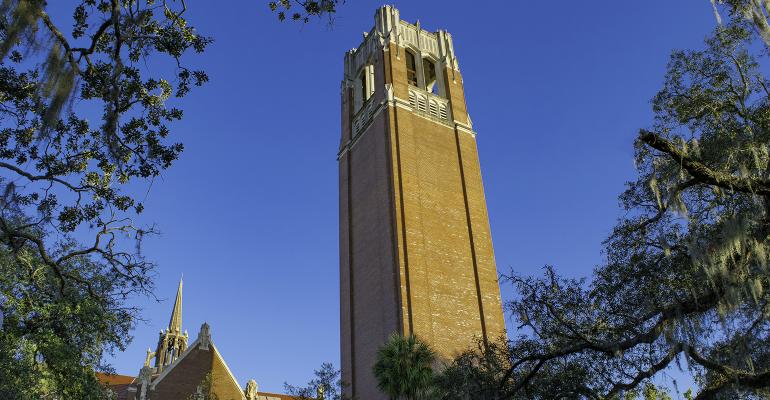 Where You Go to College Doesn’t Matter

Though many of your clients probably believe it does.

As a financial advisor, you can wince at the prospect of your clients blowing $300,000 for a bachelor’s degree for a single child. That’s a lot of assets you will potentially not be managing anymore and multiply that if parents have more than one child.

You’re in a tough spot. Intuitively you might think that that’s too much money to spend when retirement isn’t that far away. Or maybe you’re in the camp that believes the stiff financial sacrifice is worth it.

Let’s say, however, that you wisely take the position that paying an extreme price for a little old bachelor’s degree is nuts. How could you ever counteract the ingrained belief of many high-income clients that the pedigree of a university is strongly tied to a graduate’s ultimate success in a career and even in life.

Well, that’s where I’m going to help you. Today I’m sharing with you ammunition to help parents resist the urge to wildly overspend for college.

An excellent report entitled A Fit Over Rankings: Why College Engagement Matters More Than Selectivity expertly lays out important reasons why parents and their children should pause before believing an elite education is the only realistic alternative to a happily-ever-after life.

Challenge Success, a nonprofit that is closely affiliated with Stanford University Graduate School of Education, wrote the report that summarizes the extensive research and findings in these areas:

To make it easier for you, I am highlighting three significant findings that can help you make the case with parents for spending a more prudent amount of money on colleges.

There is no doubt that, as a group, students who graduate from the nation’s most elite higher-ed institutions do enjoy high earnings. The question remains, however, whether the grads’ alma mater had anything to do with their overall impressive earnings.

Two landmark studies, which examined decades’ worth of salary data, strongly suggest that wealthy students don’t boost their earnings power by attending the most elite institutions.

The conclusion of this much lauded research was that the high-income teenagers who apply to these prestigious universities will do well in their careers—regardless of whether they are admitted—because they are bright, talented, ambitious and have rich parents. For these affluent students, an elite education just isn’t necessary because they were born into golden-ticket households.

The research suggests that a better predictor of earnings is the average SAT scores of the most selective school that a teenager applied to—not the typical scores of the institution that the student ultimately attended. Please let that sink in!

Both studies, however, did document a significant boost in income among black and Latino graduates, as well as low-income and first-generation students who attended Ivy League schools.

The Folly of College Rankings

College rankings are one of the major factors fueling the preoccupation with college selectivity. The rankings that are the most influential and most destructive belong to U.S. News & World Report.

A huge body of research and commentary exists that decries the use of U.S. News & World Report rankings as a proxy for academic excellence, but that hasn’t stopped families from doing so.

The most fraught factor that U.S. News measures is its reputational yardstick, so let’s take a look at that.

U.S. News’ reputational score is generated after it sends out an annual survey to three administrators from the offices of president, provost and admissions at each school in a particular category. National Universities, which includes nearly all of the nation’s best-known universities, is the most prominent category. Someone in each office must assess what they think about their peers on a one-to-five grading scale.

Here, however, is the dilemma:

What do administrators, for instance, at UCLA, Cornell, University of Tulsa and Kansas State know about what’s going on at Carnegie Mellon, Brandeis, Virginia Tech and Georgia Tech, much less all the other schools in the National Universities category? They don’t.

A better way of using the U.S. News rankings, rather than believing a school’s rank means something, is simply to use the lists to expand the scope of a college search. This tactic will be particularly helpful in searching for promising schools beyond the National Universities category. Families should try looking for ideas in U.S. News’ Regional Universities and National Liberal Arts Colleges categories and then start researching them.

When looking at colleges, families often think about the right fit, which is a slippery concept to pin down. Research on college selection has led researchers to believe that fit is strongly tied to a student’s ultimate engagement.

Work in this field suggests that what students do in college is far more important than the type of institution that they attend. Students learn more when they are actively engaged in the learning process and fare better in their careers and their personal lives after college graduation.

Research by Purdue and Gallup concluded that where students went to college—public or private, small or large, very selective or not selective—hardly matters at all to their current well-being and their work lives in comparison to their experiences in college.

These were the six factors that Purdue and Gallup concluded were critical for after-college success along with the percentage of grads who strongly agreed: 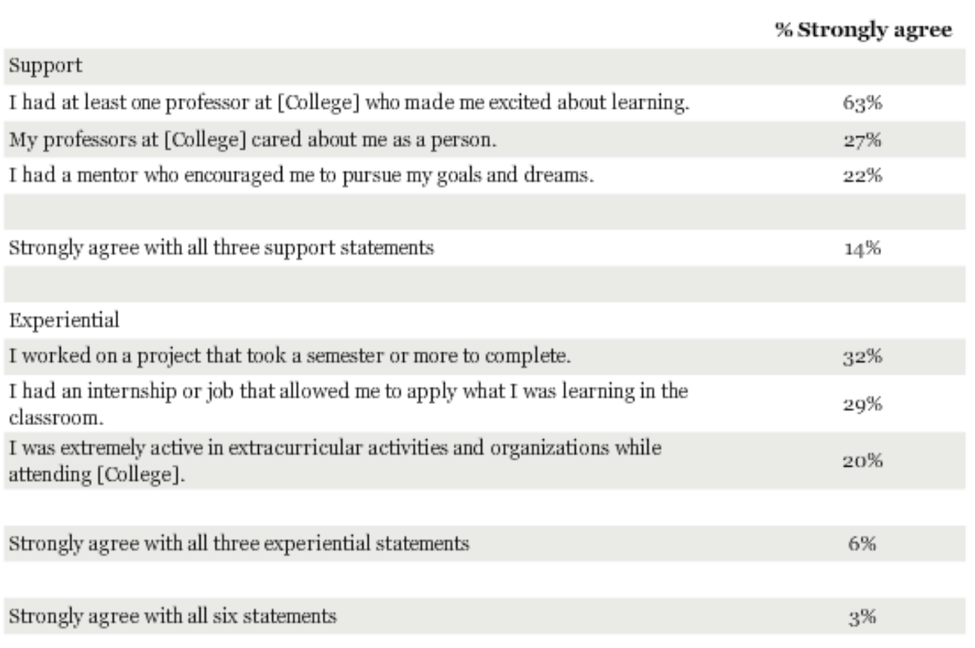 The researchers’ conclusion can be summed up this way:

When it comes to finding the secret to success, it’s not where you go to college but how you spend your college years that makes all the difference.