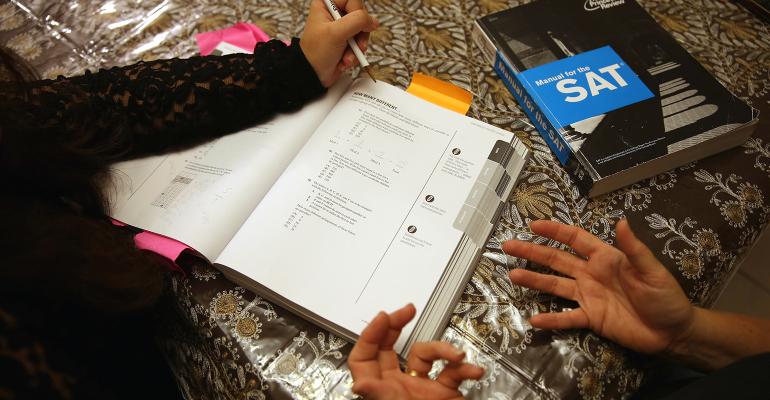 Wealthy Parents and an SAT Freak-out

Five things advisors should know about the adversity index.

Anytime the College Board makes changes to the all-important SAT test, it generates controversy.

So it’s not surprising that the latest SAT development, which the College Board unveiled in May, triggered kudos, as well as concern and even outrage.

Why you should care about this latest SAT brushfire is because the parents most likely to be upset are high-income and well-educated ones. Just the sort of folks most likely to seek help from a financial advisor.

What has caught everyone’s attention is the College Board’s roll out of what is being commonly called an adversity index. The index attempts to measure what kind of disadvantage an applicant has faced in his or her life that college admission offices should know about.

With this information, a school may decide to accept a student who has experienced tremendous hardship when the application might normally have been tossed on the reject pile.

The adversity score ranges from one to 100, with the highest signaling the most extreme disadvantage. An adversity score will be generated for each individual who takes the SAT, but students won’t be able to see what that score is.

In a pilot project, about 50 colleges participated and this year roughly 150 will receive their applicants’ adversity score. Next year the program will be rolled out to all colleges.

David Coleman, the College Board’s president, explained that the intent of the rating is to help schools locate promising teenagers whom colleges might normally overlook.

“Today, far too many of America's most talented students go unseen,” Coleman said in a television interview.

“Across the country, from Buffalo to Boise and a thousand small towns in between, there are students who achieve a great deal with very little. Yet because these students don't live in the right places or go to the right schools they can be overlooked by college admissions officers. They become simply test scores. They become invisible.”

You can probably see where this is going.

Affluent parents, who hope that their children will attend prestigious state and private universities, are worried that it will be even more difficult to gain admission if disadvantaged students enjoy special treatment because of their hardship.

Jon Boeckenstedt, an enrollment management administrator at DePaul University in Chicago, summed up the reaction quite well when he wrote this: “There is already extreme paranoia among high school counselors, independent educational consultants and wealthy parents, many of whom believe that this is going to hurt their children’s chances of gaining admission to selective institutions because the Adversity Index (the inverse of which is apparently the Privilege Index) will be held against their students or children.”

What parents need to know

In an attempt to reduce this latest SAT freak-out, here are five things that you should know about this new development:

1. The adversity index won’t impact a student’s SAT score. The index will be an additional tool that schools can use or ignore.

2. The index includes numerous factors tied to a student’s high school and neighborhood. The tool doesn’t look at a family’s financial circumstances. It also won’t take race or ethnicity into consideration.

3. With or without this index, college admissions are and will continue to favor high-income applicants. The evidence is incontrovertible that colleges favor rich teenagers.

And I’m not talking just about the most talented teenagers among the well-to-do. This also applies to wealthy teens, who aren’t as accomplished, but whose parents have the ability to pay full price for schools with a high, coveted ranking from U.S. News & World Report. The vast majority of private schools are need aware. This is a policy that favors less qualified wealthy students in the admission process when a school is running out of its money targeted for need-based financial aid. Schools will look for less qualified students whose parents can pay the entire tab.

4. Colleges do not need an adversity score to find high school seniors who have experienced hard times. Colleges operate sophisticated enrollment management systems that allow them to target students across the country who would boost their institutional priorities. Since schools can easily identify rich students on New York’s Upper East Side or the North Shore neighborhoods of Chicago, they should be able to locate kids in windswept western Kansas or the gritty neighborhoods of East Los Angeles. For colleges to say they can’t currently do that is highly disingenuous.

The new College Board tool is not a magic wand that will motivate schools to boost their acceptance of these financially less attractive teenagers.

5. The roll out of the adversity score—the official clunky name is Environmental Context Dashboard—illustrates that now even the College Board openly acknowledges that the test is rigged against students with modest incomes, observed Robert Schaeffer, Public Education Director of the National Center for Fair & Open Testing (FairTest).

It’s indisputable that SAT and ACT test results are highly correlated with income. For instance, the average SAT score for students with a household income of $200,000 fare better on the test than teenagers whose parents make $150,000 and these kids do better than their peers whose household income is $100,000. This phenomenon is true up and down the income ladder.

“Test-makers long claimed that their products were a common yardstick for comparing applicants from a wide range of schools,” Schaeffer said. “This latest initiative concedes that the SAT is really a measure of accumulated advantage which should not be used without an understanding of a student’s community and family background.”