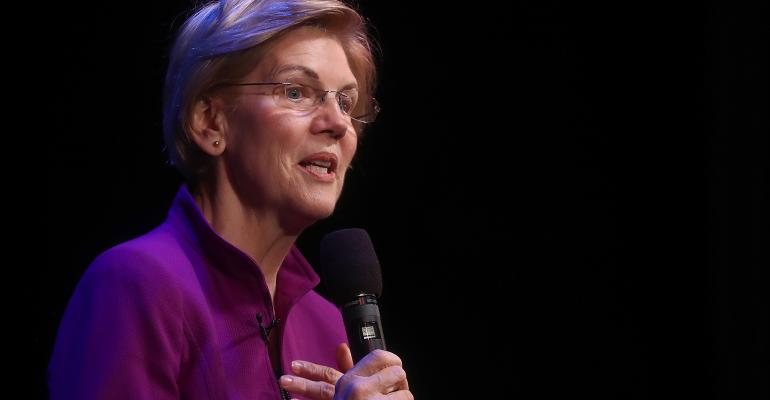 Forgiving loans today is a transfer payment to people who will earn several million dollars over their working lives.

(Bloomberg Opinion) -- Many progressives are cheering Senator Elizabeth Warren’s new proposal that promises to eliminate all student loan debt for three quarters of the 45 million Americans who owe college loans. They are also applauding the 2020 Democratic presidential candidate’s call for college to be universal, with free tuition at every public two- and four-year college. And she proposes a huge expansion of federal grants to make non-tuition expenses more affordable, allowing students to graduate debt free.

This proposal is ridiculous.

It is ridiculous in a way that should be salient to progressives: People who go to college typically earn higher incomes than those who don’t. So debt forgiveness takes tax revenue — which comes from taxpayers, not from the money tree — and redistributes it to those who are relatively well-off.

Aside from all the ways such a plan would provide incentives to enterprising people to game the system and to colleges to inflate costs even more than they already do, there’s a larger principle here: The U.S. needs to spend less public money on households earning comfortable incomes, not more.

Warren estimates that debt forgiveness would cost $640 billion. To put that in perspective, it would cost about $6 billion per year to double the earned-income tax credit — a federal program that subsidizes wages for low-income households — for childless workers. I’d rather spend the marginal taxpayer dollar expanding economic opportunity for the working poor than giving a subsidy to relatively well-off households.

Moreover, what matters here is lifetime income. A household with, say, two 27-year-old college graduates earning $85,000 today should expect to earn considerably more over the next four decades. Their salaries will grow as they gain experience in the labor market.

Those who drop out with significant debt do not enjoy the earnings premium that comes with a diploma. Indeed, there are many Americans — though far fewer than Warren implies — who are truly struggling under the weight of their federal student loans.

Yet the U.S. already has a safety net in place to deal with those loan situations. For example, income-based repayment plans adjust monthly student loan payments based on income and family size, and any outstanding balance is forgiven after two decades of payments have been made. Warren should explain why these programs are inadequate.

Debt forgiveness on the scale she proposes presumes a student debt crisis where one does not exist. A 2014 Brookings Institution paper by higher-education experts Beth Akers and Matthew M. Chingos finds that the monthly payment burden of borrowers has not increased over the past two decades, with the median borrower spending around 4 percent of monthly income on student loan payments. Akers and Chingos conclude: “Americans who borrowed to finance their educations are no worse off today than they were a generation ago.”

In addition to forgiving debt from student loans, Warren would make public college free of charge to students, and would push for everyone to go to college. This is a step in the wrong direction. We need to stop sending the signal to our youth that a four-year college is best for everyone.

To be fair, in focusing on two-year colleges in addition to traditional four-year degrees, Warren’s plan sends a more productive message to high schoolers than does our college-or-bust culture. But two-year community colleges are already very affordable. Instead of pouring resources into traditional four-year colleges, public policy should be focused on new education models to make sure workers have the skills they need to increase their wages in the 21st century economy.

The senator’s plan would invest resources in attempting to make higher education universal, yet in practice children raised in higher-income households will continue to be much more likely to attend college. So the free tuition component of Warren’s proposal suffers from the same problem as her debt forgiveness component: It is a giveaway to relatively higher-income people — a giveaway they don’t need, as the labor market’s rewards for a four-year diploma are much more significant than the debt students incur to earn one.

I’ve been pretty negative, so I’ll conclude by praising the senator for wanting to pay for her proposal, rather than, say, leaning on modern monetary theory (i.e., the money tree) as rhetorical support that financing it isn’t needed.

She claims that the full cost of debt cancellation and universal free college would be financed by her proposed “Ultra-Millionaire Tax” — a 2 percent annual wealth tax on the 75,000 families with more than $50 million in net worth in a nation of 128 million households. Unfortunately, her punish-the-rich tax proposal — befitting its Dr. Evil-esque name — will also serve to reduce savings and investment, and therefore productivity and wages. It is as misguided as debt forgiveness and free tuition. (That’s another column.)

Warren is one of many Democrats who want to take the price of college to zero. And she is likely correct in her political judgment that millennial voters in her party’s 2020 presidential primaries who find their student loans irritating will be attracted to her proposal to forgive their debt and create a new entitlement for their benefit. But it’s deeply misguided policy. And it doesn’t take a college degree in public policy to see that.

Michael R. Strain is a Bloomberg Opinion columnist. He is director of economic policy studies and resident scholar at the American Enterprise Institute. He is the editor of “The U.S. Labor Market: Questions and Challenges for Public Policy.”

To contact the author of this story: Michael R. Strain at [email protected]