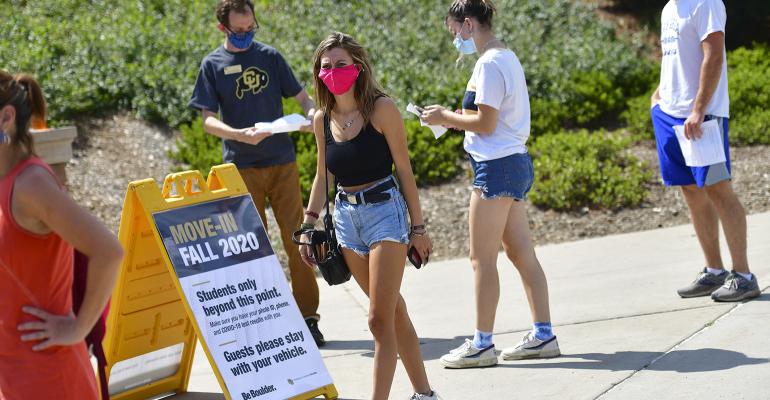 Rethinking Paying for College During COVID-19

A degree is still a good idea, but getting one requires some unconventional planning.

In a normal year, millions of young adults would be happily heading off to college for the fall semester, full of excitement about furthering their education.

But that was in our blissful pre-virus era. Now we don’t know if, how or when higher education will begin or once begun, when or if it might stop again.

Here are some new ways of thinking about saving and paying for college for your clients who still want the best possible futures for their children and grandchildren.

Stop saving so much for college

Clients who are already financially independent should continue to save money for future college costs, cramming as much as they can into tax-favored vehicles like 529 plans. But the vast majority of Americans, who are in a more financially precarious position, should instead direct any extra dollars toward increasing their emergency cash reserves, at least until they have six to 12 months of living expenses on hand. Then they should maximize savings for retirement, in both at-work plans and personal (and spousal) Roth IRAs, if eligible.

Once the child is ready to go to college, if the parents have suitably funded their retirement plans, they can pay for higher education expenses by redirecting money that was previously being saved for retirement. They can also borrow from their 401(k)s or withdraw the contribution portion of the Roth IRAs with no taxes or penalties.

But if the family is still short on cash when the child enrolls in college, they should . . .

Borrow what they can

Higher education debt can certainly be a burden for young adults. Yet when applied toward the cost of a wisely chosen school and major, it can be one of the most useful loans to take.

Begin with federal student loans that offer relatively easy access and repayment terms that are more lenient than most other kinds of debt. Plus, these loans may be forgiven at some point in the future. If savings and federal loans aren’t enough to cover the cost of college, private loans should be considered. But the application process is more stringent, and the repayment rules are generally less flexible.

Too much for tuition?

It’s never been a more urgent time for financially insecure families to consider the benefit their child is getting when paying the cost of a higher-priced school.

Especially when some schools’ instruction may be only virtual for the foreseeable future, thereby reducing a great deal of the personal interaction students will have.

Fortunately, it doesn’t take much research for students to find an as-good-or-better public school with a lower net expense than a preferred private college, or a reputable in-state public school that is much cheaper than one in an out-of-state location (and with out-of-state tuition).

Before making a decision on which school a student will attend, clients should ask each prospective school if the net price can be reduced in any way (and the family shouldn’t hesitate to use each school’s offer as a negotiating tool with the rest of the schools).

If students are choosing between schools that are otherwise relatively similar in cost and benefit, they should choose the one that can be easily driven to and from.

Then if there is a sudden virus outbreak on the campus, parents can quickly drive to retrieve the student until the proverbial coast is clear and then return them to campus once in-person classes resume.

Better yet, the closer the school is to the family’s home, the more likely it is that the student can stay home and take classes online, commuting to campus only when necessary.

Not only will this practice lessen the student’s potential exposure to the virus, it will also save a bundle of money on housing and food—which typically make up about half the cost of getting an undergraduate degree.

Clients who have the desire, need and/or resources to place their student on campus may want to consider avoiding the dormitory option in favor of off-campus housing.

A student living in a house or apartment will likely be safer, as she will only be regularly exposed to a couple of roommates each day, instead of the couple hundred in a traditional dormitory. And as the procedures implemented by schools this previous spring demonstrated, if/when the campus is shut down to slow the spread of the virus, most dorm residents had very little choice but to move out of the closed dorms and head home. But those who live off-campus could remain in their respective houses and apartments, if they so desired.

A word of warning, though: If the school does close the campus and shut down the dorms, the students may have a better chance of getting some or all of their previously paid dorm expenses rebated from the school, rather than getting a landlord to let them break their lease or give them a discount on rent.

If the current economic conditions continue, it’s going to be hard enough for students with pragmatic and practical training to get (and keep) a job that provides a self-sustaining paycheck. It’s going to be even more difficult for those graduates who have chosen more ... um, “idealistic” fields of study.

What makes this topic even more treacherous is that many relatively healthy industries have been quickly and nearly destroyed by the necessity of social distancing. Trying to bet on which ones will survive and thrive is more difficult than ever.

Therefore, students should not only opt for the most pragmatic major they can stand (such as those in the STEM, education or health care fields) but also consider adding a minor or second major with a more general application, like accounting, marketing or business management.