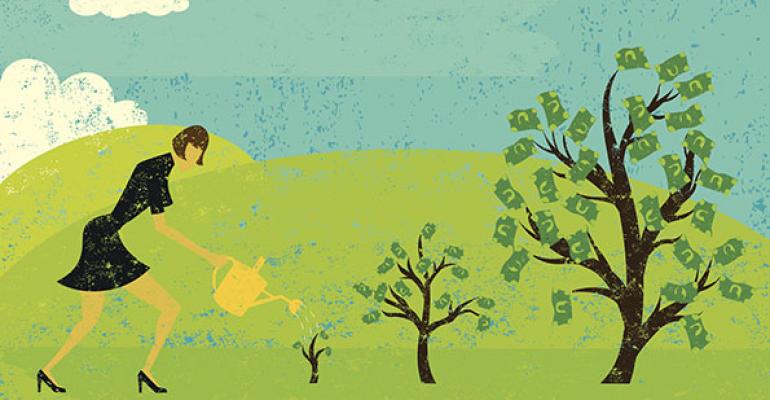 Clients who are saving money for college have a dilemma. Conservative, liquid savings don’t pay enough interest to keep up with rising costs, but more aggressive investment choices may go down in value (and stay down) just as the bills start coming due.

In the right situation, prepaid tuition plans can provide savers with a competitive ersatz investment return, especially for families with children who are bound for college in the next few years.

Although the rate of increase fluctuates, most of your clients with younger children will agree that tuition costs are likely to only go in one direction: Up.

That’s where 529 prepaid tuition plans can help. These vehicles have many of the same contribution, tax, control, financial aid and estate tax features of the more common traditional 529 savings plans. But instead of choosing from an array of mutual fund investment options, depositors to prepaid tuition plans lock in future tuition shares or units at prices quoted at the time of purchase.

The prepaid plans usually only cover future tuition and mandatory fee expenses, and not room, board, or other costs. Other limitations may include the residence of the beneficiary, or they are only for certain qualifying schools.

Making a deposit to a prepaid tuition plan doesn’t guarantee that the student will be accepted at one of the participating schools, however. But in that case most plans offer the option of transferring the account value for attendance at an outside institution, or receiving a refund.

One strategy that might serve families well is to use both an appropriate prepaid tuition plan, as well as a standard variable 529 college savings account. Then the family can benefit if tuition cost increases exceed the investment performance of the variable 529 plan.

But they will also have a backup plan if the investments outperform tuition increases, or the student doesn’t attend a participating institution. The money in the variable 529 plan can be used to pay a wider array of education-related expenses beyond tuition.

Several states sponsor their own 529 pre-paid tuition plans. However, many of the states limit the qualified use of the plans to instate residents, or attendance at public schools within the state boundaries, or both.

And be careful on timing. Although some state plans offer year-round enrollment, several limit the enrollment period to just a few months during the calendar year.

Last but certainly not least, consider that some plans may be unable to honor the pre-paid tuition obligations, due to underperformance of the underlying funds, state financial conditions or legislative changes.

Savingforcollege.com has a comprehensive listing of the individual state prepaid tuition plans.

Although the state-run prepaid tuition programs are focused on public schools, families interested in private colleges and universities have a similar tool at their disposal.

The eventual value of the certificate depends on the tuition rate charged by the school in question, at the time of the purchase. For instance, a $10,000 deposit today might buy 25% of a year’s tuition at one institution, but 60% of annual tuition expenses at a different school.

The tuition shares are guaranteed to be redeemable for up to 30 years after the date of investment. Even if a college or university would leave the group in the future, it is contractually-bound to honor prepaid tuition certificates sold while it was participating in the plan.

If the student doesn’t attend a participating institution, the account owner still has several options. First, he can leave the account open for up to 30 years after enrollment, change the beneficiary or roll the funds over to a state-sponsored 529 plan.

Deposits to the Private College 529 are held by the OFI Trust Company, and managed by a subsidiary of OppenheimerFunds. If the funds are withdrawn by the account owner and not used at a qualifying school, the net amount may reflect a gain of up to 2% per year, or a loss of no more than 2% per year, depending on the underlying performance of the trust’s assets.

Finally, a tuition certificate must be held for at least 36 months before it can be redeemed to pay for qualified tuition expenses.  You can investigate the details of the plan and search for participating institutions at www.privatecollege529.com.

Prepay at the school

Clients with a kid on the cusp of college and who have enough saved to pay for the future expenses might ask you, “What should we do with the money in the meantime?”

You might suggest a short-term CD, a money market account, or relatively-conservative bond fund. But there may be a solution that offers more return and less risk.

Some schools allow families of admitted students to pay for future tuition costs in advance, thereby locking in the costs at today’s likely lower rates.

For instance, Harvard offers qualifying families of enrolled students the opportunity to pre-pay tuition costs (and health services fees) for up to five years in advance.

Usually if the student studies abroad, transfers, or drops out of school, the school refunds unused amounts, albeit without interest. Clients should contact the school’s financial aid office to see if they offer direct tuition prepayment, and what terms and conditions may apply.