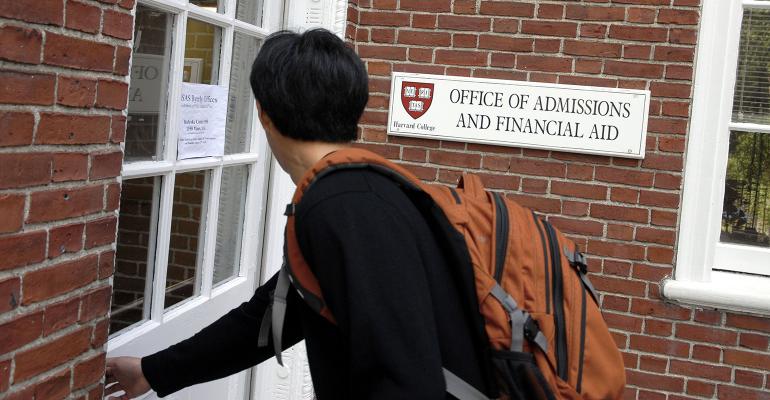 A New Way to Game the College Admission Process

A closer look at the latest scheme wealthy parents are using to qualify for need-based aid—transferring guardianship.

When I heard about the first college admission scandal when it became public, I initially thought it was a one-off event.

A devious college consultant in Southern California had dreamed up an almost fullproof plan to get the teenagers of wealthy clients into prestigious universities often through compromised athletic coaches.

Then, another admission scandal hit late this summer, with a scam involving wealthy parents in suburban Chicago.

I now believe that it’s more likely that there will always be wealthy families who will try through illegal or highly unethical means to game the college admission process. And none of us will know how often they will succeed.

My big question now is, what will the next scam be and how long will it take to be exposed? The New York Times recently published a front-page story on how students in wealthier schools are more likely to obtain disability diagnoses to get extra time on class work and on the SAT and ACT. This additional time can ultimately give them a college admission boost.

The scheme that I am focusing on today, however, was uncovered by The Wall Street Journal and involves affluent students in suburban Chicago applying to college as independent applicants. These teenagers were able to apply as independent students and qualify for need-based financial aid because their parents had transferred responsibility for them to friends or relatives who agreed to serve as their legal guardians.

That’s right. The students’ parents had walked away from them (wink, wink), and other adults had stepped in (wink, wink) to look after them.

The Wall Street Journal talked to one mother in the Chicago area who said she transferred guardianship of her teenage daughter last year. She and her husband earn more than $250,000 a year, but she said they had spent roughly $600,000 on their other children to attend college and had no equity left in their house that is valued at $1.2 million. She said they had little cash on hand and little saved for their daughter’s education.

After the guardianship paperwork was done, the daughter had to declare only $4,200 of her own income on the financial aid forms since her parents’ income and assets were now irrelevant. The student attends a West Coast private university that costs $65,000 in tuition and her total expense is just $18,000 a year, which her grandparents pay.

It’s a pretty sweet deal, and if you played by the rules when you sent your child to college or plan to, you’d rightly be livid right now.

Because of the ability to qualify for need-based financial aid, what parents wouldn’t love to have their teenager declared independent when applying to college? Over the years, I’ve had quite a few parents ask me if any or all of the following strategies would do the trick:

Taking any or all of the above steps, however, would not work. The financial aid formulas would still consider the child a dependent for aid purposes.

To qualify as an independent student, a financial aid applicant must answer yes to at least one question on this list from the U.S. Department of Education’s website.

Here are five of the 10 ways to qualify as an independent student:

One of the federal eligibility requirements for becoming an independent student does involve being in a guardianship. Here is the exact federal wording:

Has it been determined by a court in your state of legal residence that you are an emancipated minor or that someone other than your parent or stepparent has legal guardianship of you? (You also should answer "Yes" if you are now an adult but were in legal guardianship or were an emancipated minor immediately before you reached the age of being an adult in your state. Answer "No" if the court papers say "custody" rather than "guardianship."

After the guardianship scheme broke in The Wall Street Journal and ProPublica Illinois, the U.S. Department of Education condemned the tactic and is exploring ways to shut down abuses of the guardianship rules.

While guardianships are legal, no one anticipated wealthy parents would use them to qualify for aid. I wouldn’t be surprised if the guardianship wording is changed to prevent the abuses that have been uncovered in Chicago.

Andrew Borst, the director of undergraduate enrollment at the University of Illinois summed up why this tactic, which may not last much longer, is so egregious:

“Our financial-aid resources are limited and the practice of wealthy parents transferring the guardianship of their children to qualify for need-based financial aid or so-called opportunity hoarding—takes away resources from middle- and low-income students.”

It appears that the guardianship loophole will be closing soon, but who knows what the next scam will be. Stay tuned.