brought to you by
Wealth Planning>College Planning

This is the question that parents are increasingly asking schools as they contemplate bankrolling their children's college years: Will my child get a good-paying job after graduating from your school?

Pose this question to a college admissions representative, and you are likely to hear that nearly all the institution's recent graduates are employed.

But institutional evidence is flimsy at best. Schools typically base their employment statistics on surveys that they send out to new graduates. The percentage of graduates who fill out these surveys, however, is usually low.

These surveys are also not likely to differentiate between those who have jobs that actually require a college degree and those that don't. Nor would it be in a school's interest to make a distinction between students who have a full-time job versus a part-time one.

With this focus on job prospects, there has been a growing interest within the U.S. Department of Education and outside groups to generate and share salary and job statistics for individual schools.

PayScale, the online salary information company, has been sharing salary data linked to individual schools through its annual PayScale College Salary Report. PayScale relies on individuals voluntarily sharing their wages if they want to use its salary comparison site, and the site uses this information when ranking schools by salary potential.

In addition, the federal government started releasing aggregate salary data for graduates at individual schools last year via its College Scorecard website. On the site, you can discover the median salaries of alumni 10 years after leaving their schools.

While the federal government could access actual salary figures for graduates, it has been hamstrung in what it can share. With intense lobbying primarily from private colleges and universities, Congress has repeatedly voted against making salary data available to consumers.

What the Department of Education was able to do on its own, however, was to release salary figures from graduates who either obtained federal grants, which are earmarked chiefly for lower-income students, and/or who borrowed through federal loans. The available data fails to cover the salaries of about half the graduates.

But a California-based nonprofit has recently stepped in to offer greater graduate salary information than any other source.

Educate to Career provides a more precise picture of the salaries that graduates at a particular school are earning. The site drills down and shares not only the salaries per academic major of last year's graduates, but also by occupations within those majors.

For example, recent economic majors at the University of Chicago made an average salary of $67,600. Of the jobs surveyed, alumni who became marketing and sales managers ($87,600) and financial managers ($84,500) earned the highest beginning salaries. Their earnings far outpaced the econ grads who became accountants or auditors ($63,400) and personal financial advisors ($65,500).

To find the academic major/occupation figures of a school, click on the Career Counselors link on the home page of Educate to Career, then click on the College and Major Outcomes link.

Educate to Career also created a college ranking system that measures the return on investment that attending a particular school provides its graduates. The site compares the cost of the school with the improvement in earnings and employment prospects that its graduates enjoy.

The site, which ranks 1,182 public and private schools, looks at such metrics as the percentage of grads employed in occupations that utilize their field of study, the average salary earned by recent grads and the typical number of years to graduate.

The data powerhouse behind ETC's figures is Job Search Intelligence, which is a leading provider of educational attainment and career outcomes. Among the California firm's clients are more than 5,000 employers and more than half of Fortune 500 companies. The firm uses dozens of data points in generating its salary figures from such sources as the U.S. Census Bureau, Bureau of Labor Statistics and National Center for Education Statistics. 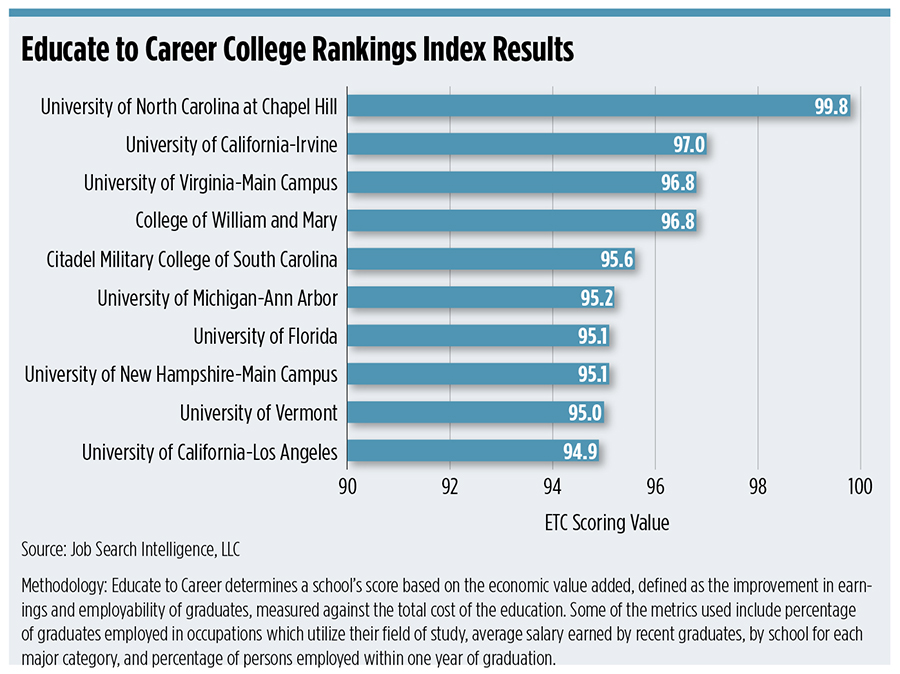 Lynn O'Shaughnessy is a nationally recognized higher-ed speaker, journalist and author of The College Solution. She writes about college for CBS MoneyWatch and her own blog,TheCollegeSolution.com.